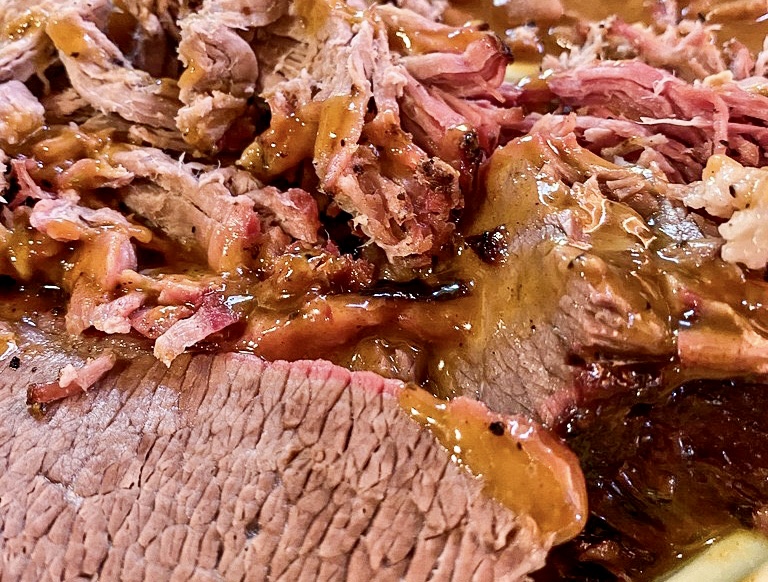 These Are The Must-Try Best Barbecue Spots in Austin

Austin is quickly becoming one of the culinary capitals of the country. While there are many fantastic restaurants in town, Austin specializes in barbecue. Texas barbecue style tends to use the flavor from the fat in the meat to season it while it cooks low and slow. Dry rubs are more popular in Texas and the sauce is always served on the side. We’ve put together our list of the best barbecue restaurants – big and small, world-known and little-known – to try out in the area.

Valentina’s Tex Mex BBQ recently took home top honors in the Austin Chronicle’s Best of Award 2021 for Best Barbecue. But that’s not the only place for great BBQ in Austin!

Here are some more of the best barbecue spots in Austin!

Cooper’s Old Time Pit Bar-B-Que
All the way from Llano Hill Country comes the tender brisket from Cooper’s. This downtown restaurant features two levels of seating with a bar on both levels so you can order a beer to wash your food down.

la Barbecue
Originally a food trailer that moved into the Quickie Pickie on East Cesar Chavez, Pit Master LeeAnn Mueller is smoking their brisket over Texas Oak for 14 to 16 hours. Guaranteed to melt in your mouth.

Franklin Barbecue
Probably the most well-known barbecue spot in Austin, Owner and Pit Master Aaron Franklin has been awarded the Best Barbecue Spot in both Texas and America. Franklin’s brisket has been eaten by President Obama, Anthony Bourdain, and Jimmy Kimmel.

For the Pork Ribs:

Micklethwait Craft Meats
A quaint old school trailer on the East side, Tom Micklethwait uses Texas Oak to smoke his meats, and prides his barbecue on being the best quality meat one can find. Their pork ribs are juicy and fall right off the bone.

Lamberts
For a fancier barbecue experience, check out Lamberts, sitting in the heart of downtown Austin in a historical building. Their pork ribs are rubbed with a fennel and coriander mix, giving the ribs a unique flavor.

BBQ by Rudy’s Country Store
Known for their “Worst BBQ in Texas” sign, Rudy’s serves consistently delicious barbecue out of a gas station. They serve two styles of pork ribs, St. Louis and baby back, and we’re big fans of both!

For the Beef Ribs:

Iron Works BBQ
When you eat barbecue at Iron Works, you’re sitting inside of a piece of history. Originally an ornamental Iron Work shop, barbecue took over in 1978. Their giant beef rib is our favorite. If you like Iron Works’ barbecue, you can take a bottle of their house-made rub home with ya.

Stiles Switch BBQ
“No corners cut” is the theme for the owner and Pit Master of Stiles Switch, Shane and Lance. The restaurant is tucked into the Violet Crown Shopping Center, the famous spot for Dazed and Confused. Movies aside, Stiles Switch features a fun atmosphere to chow down on their absolutely giant beef ribs.

The Salt Lick
Just a short drive from Austin, The Salt Lick is brining and smoking their turkey over pecan shells to give the poultry a unique taste. Their Driftwood location is a day-trip in itself. You can BYOB or visit their winery next door to the restaurant.

Scotty’s BBQ
Barbecue being served out of a school bus turned food truck has to be great, right? Scotty’s is dishing out great tasting turkey legs, but only on Saturdays.

Green Mesquite BBQ
Right off Barton Springs Road is Green Mesquite, open since 1988. This restaurant uses mesquite wood that is seasoned, or “green” to get its smokey flavor. Their turkey is tender, flavorful, and delicious.

For the Pulled Pork:

Brown’s BBQ
Big flavor coming out of this small food truck located in front of Corner Bar off South Lamar. We love Brown’s BBQ for their pulled pork sandwich. Pro tip: ask for all the fixings.

Wunder Pig BBQ Co.
Joining The Far Out Lounge & Stage is this small food truck that serves pulled pork just as delicious as you would find in South Carolina. They use mesquite and Oak to slow cook their pork, and the flavor is incredible.

Gebby’s BBQ
If you find yourself on Rainey Street and you’re hungry and it’s way after dinner time, check out Gebby’s BBQ. This food truck is smoking their pork for twenty hours. Yes, twenty hours. It’s lean, tender, and just what you need at 11 p.m.

Interstellar BBQ
The folks at Interstellar have taken it to the next level with their beef kielbasa and cheddar with jalapeño sausage. The sausages and all their other barbecued meats are available walk-up counter style in Northwest Austin.

J. Leonardi’s Barbeque
They’re keeping it pretty traditional at J. Leonardi’s with their sausage. Hung vertical in the smoke box and smoked to perfection. The meat is also bought locally, so you’re supporting two local businesses in one stop!

Banger’s Sausage House + Beer Garden
Like the name says, they are a sausage house meets beer garden. With over twenty house-made sausages and over two hundred beers on tap, you can find exactly what you’re looking for. The chefs at Banger’s are combing ingredients like fig, bacon, duck, and port all into a sausage for one incredibly flavorful dish.

Black’s BBQ
This third generation owned barbecue joint keeps it super simple with their sandwiches. Choose from any of their seven barbecued meats, a single or double sandwich, and you’re good to go. Purists in Texas stick with the onions, pickles, and sauce, which are available at Black’s.

Kerlin BBQ
Tender, moist brisket piled onto a warm bun – what more could you want? Kerlin serves three types of sandwiches out of their East Cesar Chavez food truck. And while kolaches aren’t technically a sandwich, we strongly recommend their brisket and cheddar.

For a Unique Spin:

LeRoy and Lewis Barbecue
Open since 2017, the chefs of the LeRoy and Lewis food truck are serving up what they like to call, “New School Barbecue.” They’re supporting local ranchers with dishes like Citra Hop Sausage and Akaushi Brisket. Located in the Cosmic Coffee yard, you can grab a drink to wash down your barbecue.

Valentina’s Tex-Mex BBQ
The folks at Valentina’s are putting a Tex-Mex spin on their mesquite smoked barbecue in North Austin. For example, their Smoke Chicken Fajita is served with pico de gallo, poblano peppers, and tortillas. It’s no wonder readers voted them the best barbecue in Austin in the Austin Chronicle’s Best of Awards 2021!

LORO
From the genius minds at Uchi and Franklin Barbecue comes an Asian smokehouse that meets Texas barbecue. The brisket is absolutely delectable and the frozen slushie drinks are strong!

On the hunt for more amazing Austin restaurants? Check out these spots!