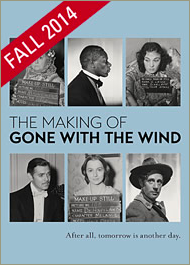 The Making of Gone With The Wind Opens Today

Go behind the scenes of a classic film from Hollywood’s Golden Age at the new Harry Ransom Center exhibition.  The Making of Gone With The Wind will be on display September 9, 2014 – January 4, 2015.

Featuring more than 300 rarely seen, and some never-before-exhibited materials, the exhibition is drawn entirely from the Ransom Center’s collections and includes on-set photographs, storyboards, correspondence and fan mail, production records, makeup stills, concept art, costume sketches, audition footage, and memos from producer David O. Selznick. The green curtain dress and other gowns worn by Vivien Leigh are displayed together for the first time in more than 25 years.

Before a single frame of film was shot, Gone With The Wind was embroiled in controversy. Selznick struggled to balance his desire for authenticity with audience expectations of spectacle. Americans debated who should be cast as Rhett and Scarlett. There were serious concerns about how the 1939 film, based on the 1936 novel by Margaret Mitchell, would depict race, sex, and violence in the South during the U.S. Civil War and Reconstruction.

This insider view reveals why Gone With The Wind remains influential and controversial 75 years after it was released.

Admission to the exhibition is free. No tickets or reservations are required. Your donation supports the Ransom Center’s exhibitions and public programs.