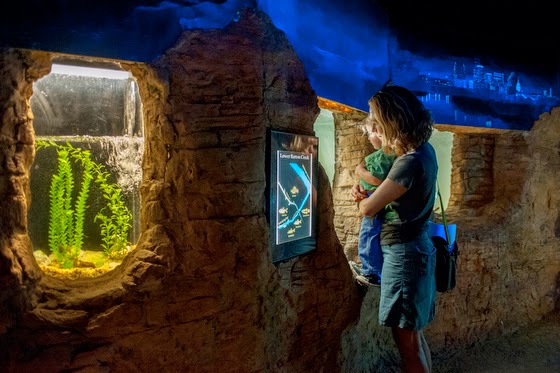 Chances are, if you have been to Zilker Park, you have likely walked right by the Splash! Exhibit and may not have known it. It’s one of those tucked away spots that often goes overlooked. But these tend to be my favorite kinds of places because of the mystery and adventure they hold! (Plus, it’s nice and air-conditioned if you’re looking to cool off after a ride on the Zilker Zephyr or playing on the playscape.) 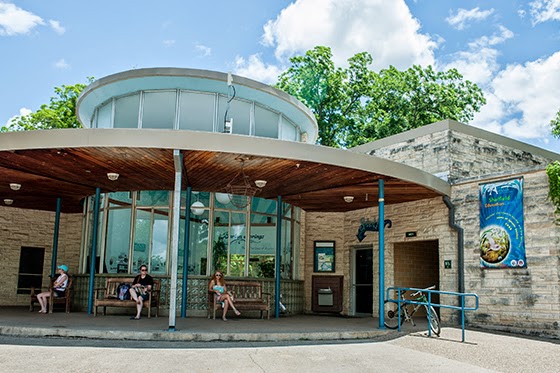 The exhibit is part of the Beverly S. Sheffield Education Center that teaches the importance of water quality and conservation. While science-minded children will eat it up, the exhibit is made fun and interactive to engage kids of all ages and interests. A few years ago, my preschool-aged son and I explored it one day after riding the Zilker Zephyr train and he loved it. 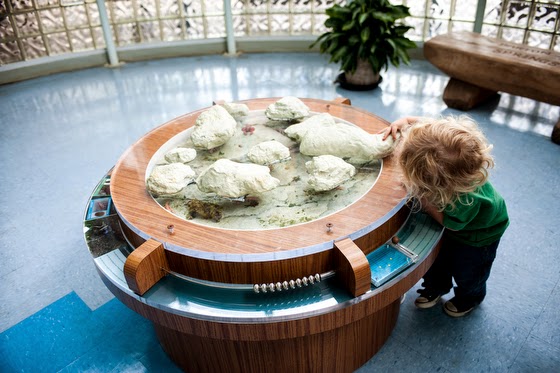 In fact, despite the small size of the exhibit, I have spent hours in it, mainly, I must admit, for its button appeal. This past week, I met my friend and her three-year old there, and it turns out he’s a big button pusher too.

As we opened the glass door, we were met with a wall of dripping limestone and water bubbles that float from floor to ceiling, enticing children’s interest. But as we followed the signs and rounded a dim corner ahead to enter the exhibit, my young friend became a bit leery.

We were entering a cave where lights reflecting on the walls simulate being underground in the Edwards Aquifer. Holding his hand, I led him through a small, cavernous room, the Aqua Theater, where a group of kids was sitting on a rock ledge to watch a short film about Barton Springs pool, the history of the aquifer, or the endangered salamanders who make their home here.

We crossed through, trying not to disturb them and passing up the chance to crawl through an even smaller, darker tunnel. Still holding hands, Denzel and I wound our way through narrow corridors ahead where we came upon an exhibit with buttons that light up areas of the Barton Creek watershed. 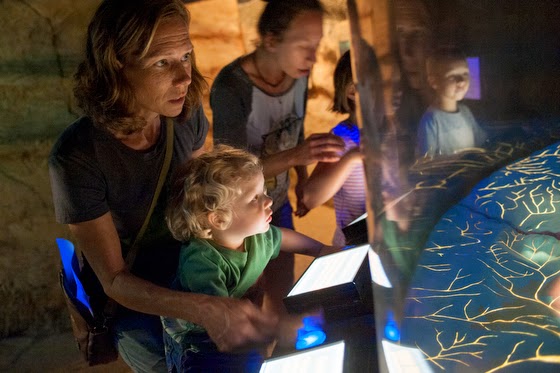 Around the next turn, we found tanks of gar, minnows, and salamander set into rock walls, simulating the habitat of the aquatic life living beneath our feet.

We continued walking into the depths of the cavern and came to a wider space filled with interactive exhibits. Here, my little friend dropped my hand and ran up to the “Storm Water Simulator” and “Spectrophotometer” as if he were going to the arcade. 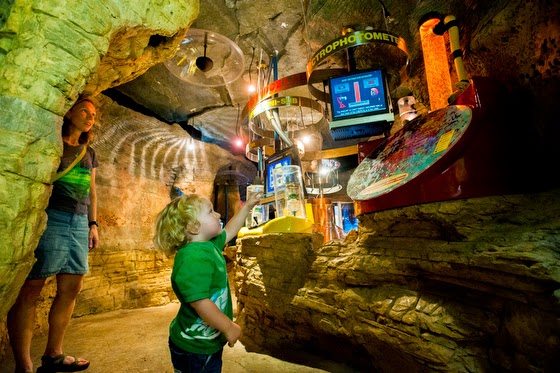 At the push of a button, we conjured up thunderstorms to rain down on neighborhood streets and nearby hillsides where we could test runoff speed.

Other buttons on clunky, brightly-colored metal machines simulated water from local creeks filling testing canisters with impressive force as they lit up and the water quality was tested and reported. Holding Denzel up to a submarine exhibit with a joystick and a helpful captain narrating on screen, he navigated the aquifer in search of water contaminants.

While we were playing, an elementary-aged group entered on a field trip. They were equally excited by the exhibits and seemed able to grasp the science behind it. 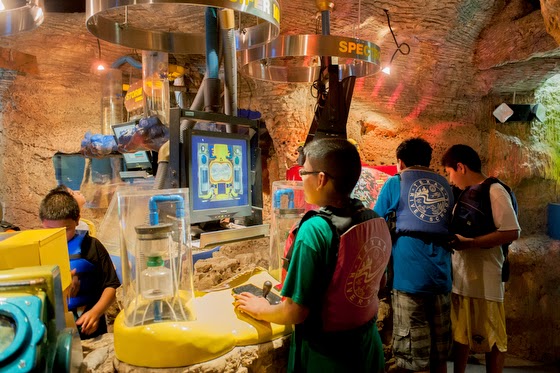 It’s a good exhibit for all ages, though of course how long you stay will depend on your child’s interests and attention span. But even babies will find the fish and water features fascinating. And though it’s a pretty small space overall, they pack a lot of lessons in.
And slowly, over time, they seep in. My son is now eight years old and the other day, when I found myself explaining how pollutants can affect water quality, I referenced the submarine game at the Splash! Exhibit and he had one of those “Ah ha!” moments when it all came together. 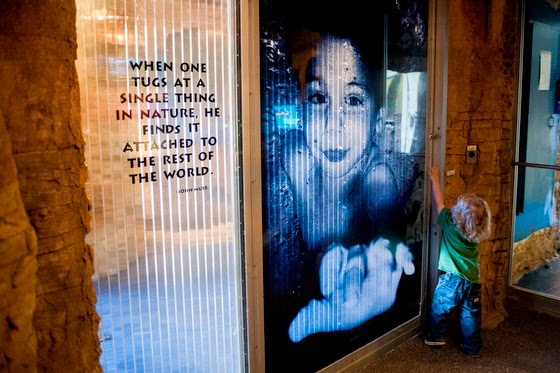 But for my young preschool friend, it was all about the buttons. In fact, just as I was used to with my son, it took us at least ten minutes to leave because to exit, you get to wave your hand on a sensor wall that slides open the mysterious bubbling wall of water. The designers knew their audience. They put a door just around the corner so kids can run laps, entering and exiting as the water wall slides open – over and over and over again.

To enter (and exit) Splash! yourself to see what your kids think of it, head to the Barton Springs Pool parking lot in Zilker Park. The exhibit space backs up to the Bathhouse and faces the parking lot near the public restrooms and water fountains. 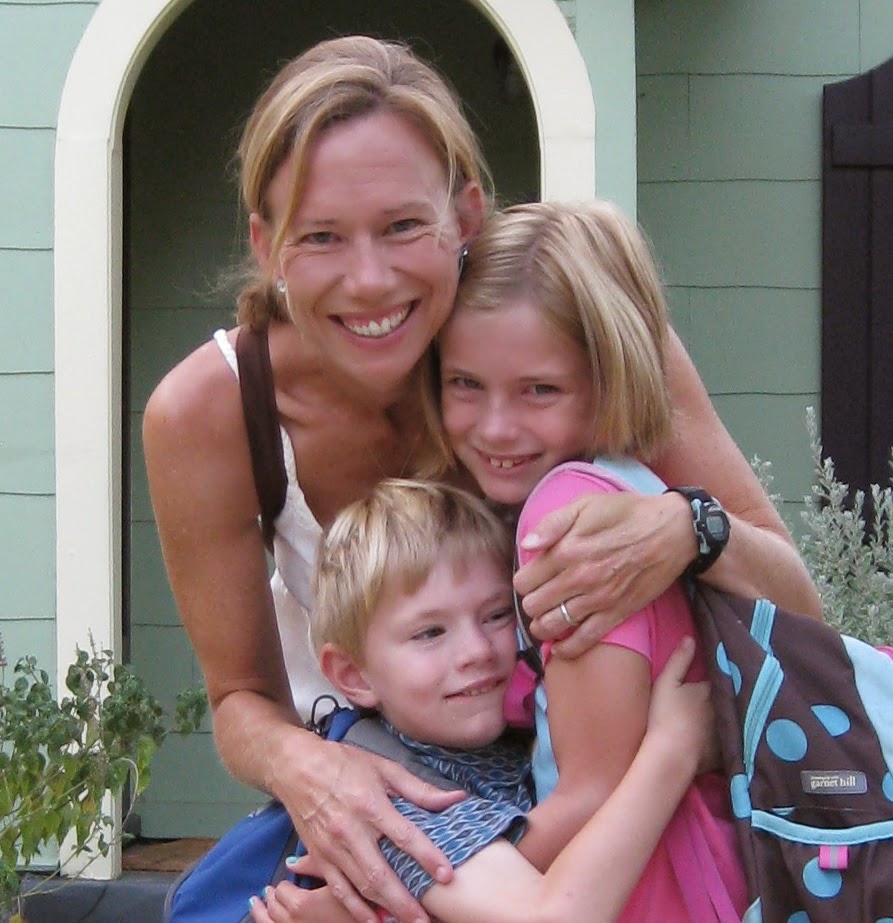 Annette Lucksinger is a mom of two and author of the new guidebook Exploring Austin with Kids: Over 100 Fun Things to Do with the Family. She has learned that the key to fun adventures is to take friends! This time she took one of her favorite little people and his photographer Mom, Deborah, who runs the boutique photography and web design studio Deborah Lykins Photo and Design. She also designed the fun website for the book.