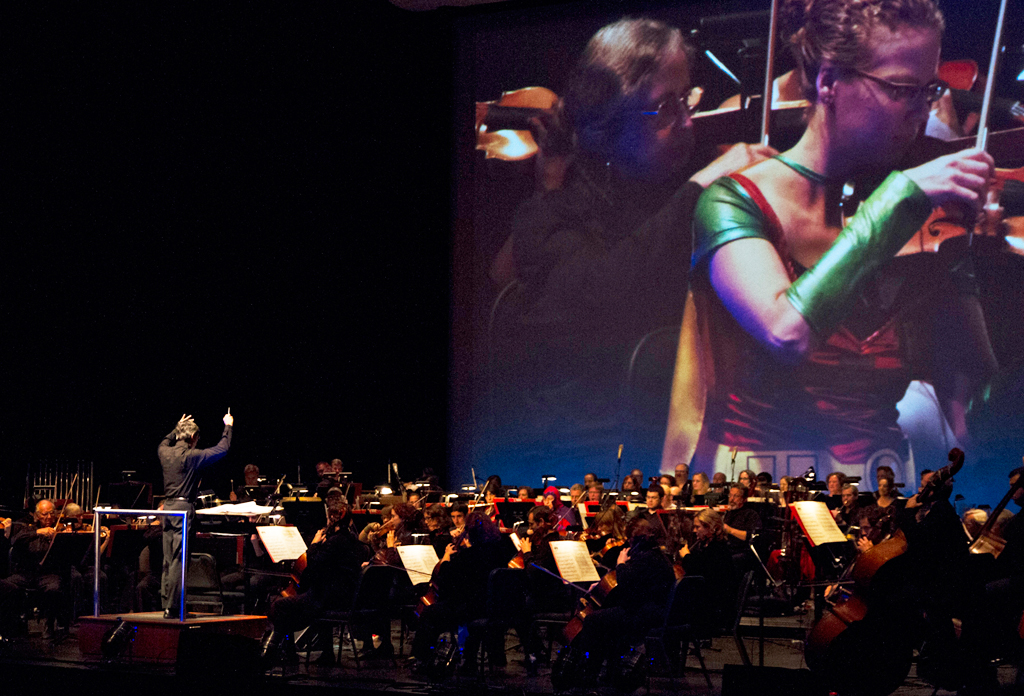 February 27 was cold and sleetish, with hints of ice collecting on bridges and another punishing round of winter storms blowing in. But that didn’t stop them from coming. They came dressed in long black robes wielding wands and sporting lightning scars. They came carrying elven bows and iron-forged greatswords, wearing ruby red slippers and Rings of Power. They came with lofty expectations, having heard the soundtracks to their favorite fantasy movies hundreds of times and, as befits inhabitants of the Live Music Capitol of the World, having memorized every melody and riff.

And they weren’t disappointed.

That evening, the Austin Symphony Orchestra teamed up with The Long Center and Dragon’s Lair Comics and Fantasy to put on a spectacular symphony performance geared at all those in Austin who love fantasy movies like The Lord of the Rings and Harry Potter. “Fantasy in February: Music From Your Favorite Fantasy Films,” they called it. ASO’s long-time conductor, Peter Bay, directed the orchestra, who like audience members were encouraged to attend dressed as their favorite fantasy characters.

“We wanted to offer music from  a variety of films spanning many years and composers that span even a greater period,” said Eric Marshall, ASO’s Public Relations and Guest Artists Manager. “Harry Potter and Lord of the Rings are some of the recent hits, but the score to The Wizard of Oz and Fantasia are timeless.” The full lineup went a little something like this:

Patrons cheered loudly at the announcement of the Harry Potter suite, but from the thunderous applause before and after the Lord of the Rings arrangement, Howard Shore’s masterpiece of a soundtrack was the clear audience favorite.

“Fantasy in February” was a part of ASO’s Sarah and Ernest Butler “Pops” concert series and ASO’s third specifically film-focused concert to date. Back in October, ASO tackled horror film compositions (the show was aptly named, “Symphony of Terror“) and in the fall of 2013, the orchestra hosted a well-received “Superheroes” concert. All three concerts amassed huge turnouts, which Marshall chalks up to Austinites’ collective creativity as much as to our love for good music.

“We were really looking forward to playing the scores from the fantasy genre,” he said. “The scores are so involved and complex with really strong themes that the audience can immediately recognize.”

With “Fantasy in February” behind them, ASO is now gearing up for its final “Pops” concert in the 2014-2015 season, “A Celebration of Rodgers and Hammerstein.” The concert will be held on June 5 and 6 and will feature songs from South Pacific, The Sound of Music, State Fair, The King and I, Carousel, and Oklahoma! Then, on June 20 at the Long Center, much to the delight of local nerds and “Hyrule in Austin” fans in particular, ASO will perform “The Legend of Zelda: Symphony of the Goddesses – Master Quest,” showcasing scores from the beloved video game franchise.

So, don’t write off ASO just because you aren’t a fan of traditional classical music. Whether their patrons are into movie scores or Mozart, ASO’s production team works hard to vary their performance repertoire so that they offer something for everyone each season. Added to SXSW, which is rocking downtown as we speak, ASO represents yet another reason why Austin totally deserves to be known as the Live Music Capitol of the Universe!