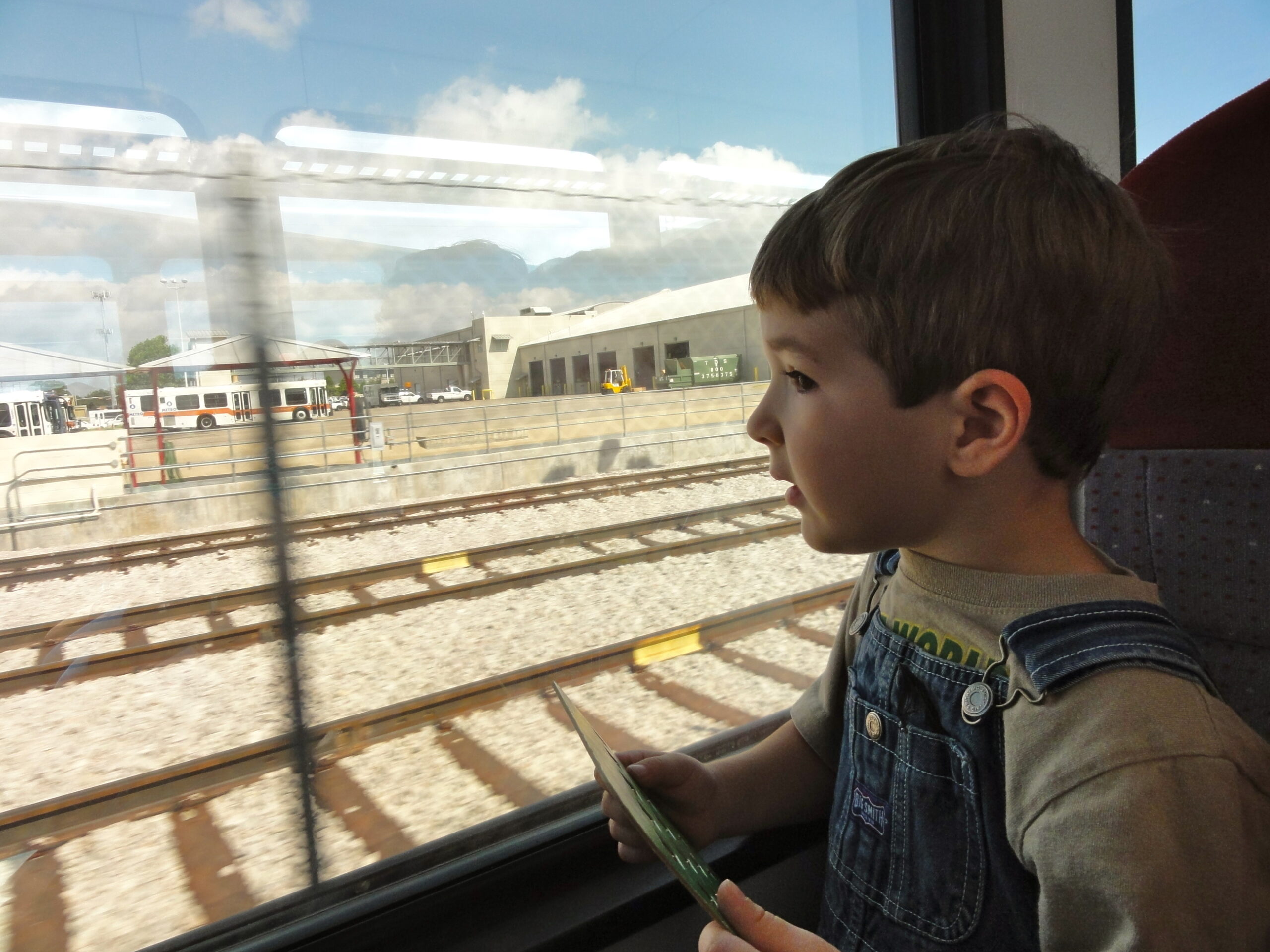 Riding the MetroRail to Downtown Austin

For years, every time my boys saw the MetroRail whiz past, they begged to know when they would get to ride the commuter train. My answer, every time, was something non-committal like, “Oh, someday soon.” Well, when it came time to brainstorm our Summer 2015 bucket list, guess what they put at the top? 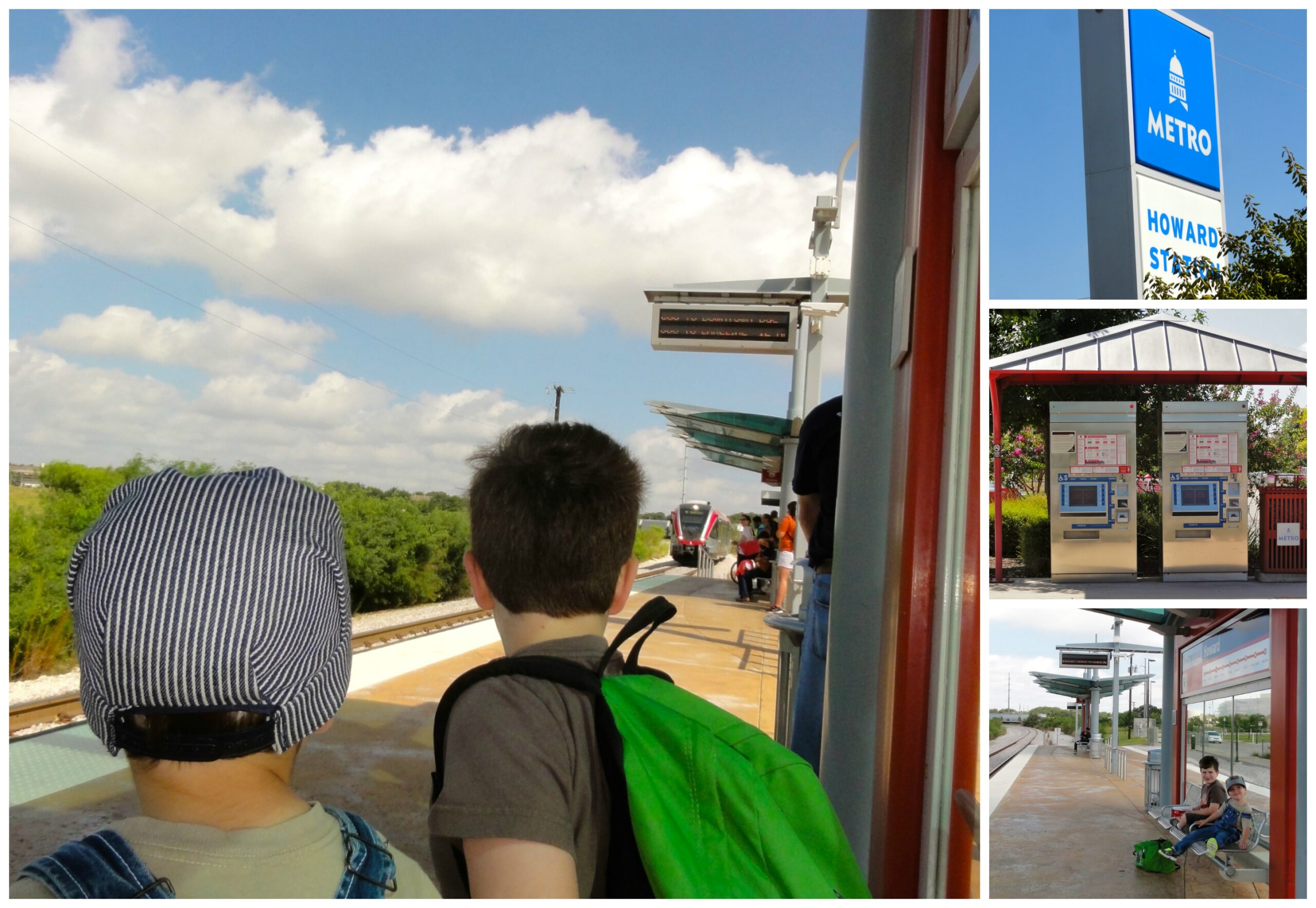 Summer nearly got away from us before I finally studied the timetable and picked a Friday morning to ride the rails. MetroRail covers 32 miles of track from downtown Austin all the way up to Leander with stops at a total of nine stations. I wanted to feel like we were getting our money’s worth–but not enough to trek north of SH 45–so we started our adventure at the Howard Station (Howard Lane at MoPac). The automated ticket vending machine in the parking lot was easy enough that I put my 3rd grader in charge of purchasing our Commuter Day Pass tickets. Ticketed and ready to go, we waited on the platform and watched the reader board countdown our train’s arrival with giddy anticipation. To kill time, we studied a paper map of the route (available at the station) while waiting, taking note of landmarks to look out for along the way. There were fewer than ten other folks boarding the 10:22 a.m. train with us; finding seats was no problem.

Once we started rolling, I was surprised to see how wooded and picturesque the ride to our first stop, Kramer Station, turned out to be. From there, the rest of the route to downtown passed through a mix of industrial, commercial, and residential areas. The scenic highlights for my boys were: two Austin Energy equipment yards, the Metro garage and service center, a City of Austin equipment yard, and major construction near the MLK Station. We also spied several pieces of street art and graffiti, including the Livestrong and Austin Metal & Iron Co. murals featured in this post. Because my children become crazed lunatics where they’re bored, I dragged along a backpack full of provisions. We only ended up bringing out our old-school Auto Bingo cards, which proved to be a great way to keep them focused and busy searching for specific signs, animals, vehicles, etc. along the way. 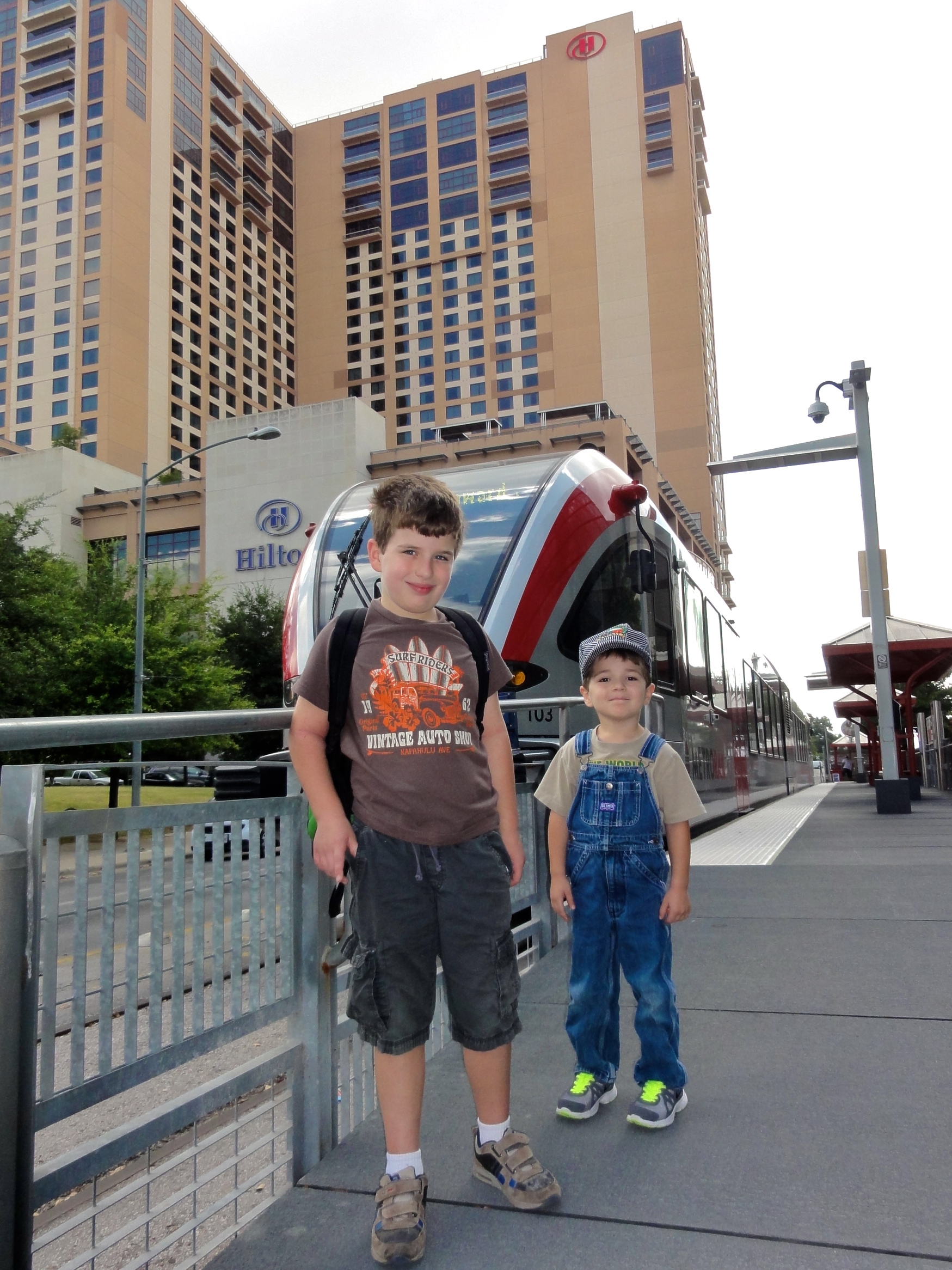 Looking back, I think the reason I was so reluctant to ride the MetroRail despite years of nagging was that I just didn’t know what we’d do once we reached downtown. It seemed like such a drag, plus a waste of time and money, to turn around and come right back. Yet the location of the station, just outside of the Austin Convention Center, isn’t favorable to family fun (except on the rare occasion when something kid-oriented is happening there). Nearly every attraction I thought of, not only downtown but also at stations along the way, proved just a smidge too far from the station for walking on a 100-degree day. If my kiddos were small enough to be confined to a stroller, things might’ve been different. As it was, more than three or four blocks in any direction just wasn’t realistic for us. So, I opted to time our trip around lunch with loose plans to check out the Brush Square Museums once our bellies were filled. 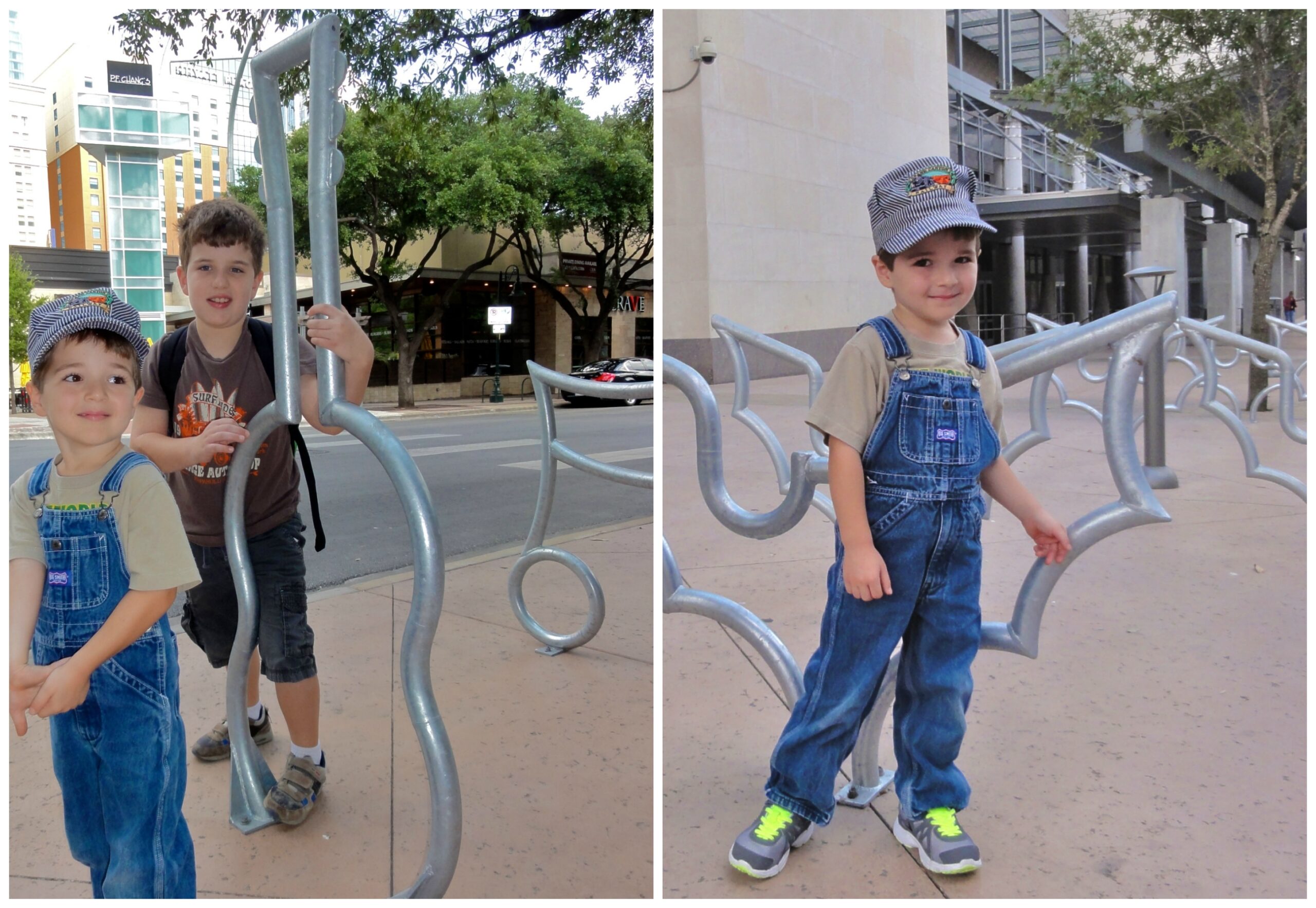 Upon arriving at the downtown station (the end of the line), we walked around the back of the Convention Center (where the coolest bike racks in all of Austin reside) to Iron Works BBQ. BBQ in an historic building that once house an ornamental iron factory, complete with old blacksmith’s tools? Marvelous. A major construction project we could watch from the comfort of our booth while eating? Even better. When we’d had our fill of meat and construction machines, we discovered a short, winding sidewalk just behind the restaurant, which led down to Waller Creek. Some low-key turtle watching was just what we needed to kill a little time before making our way back toward Brush Square, where the museums don’t open until noon. 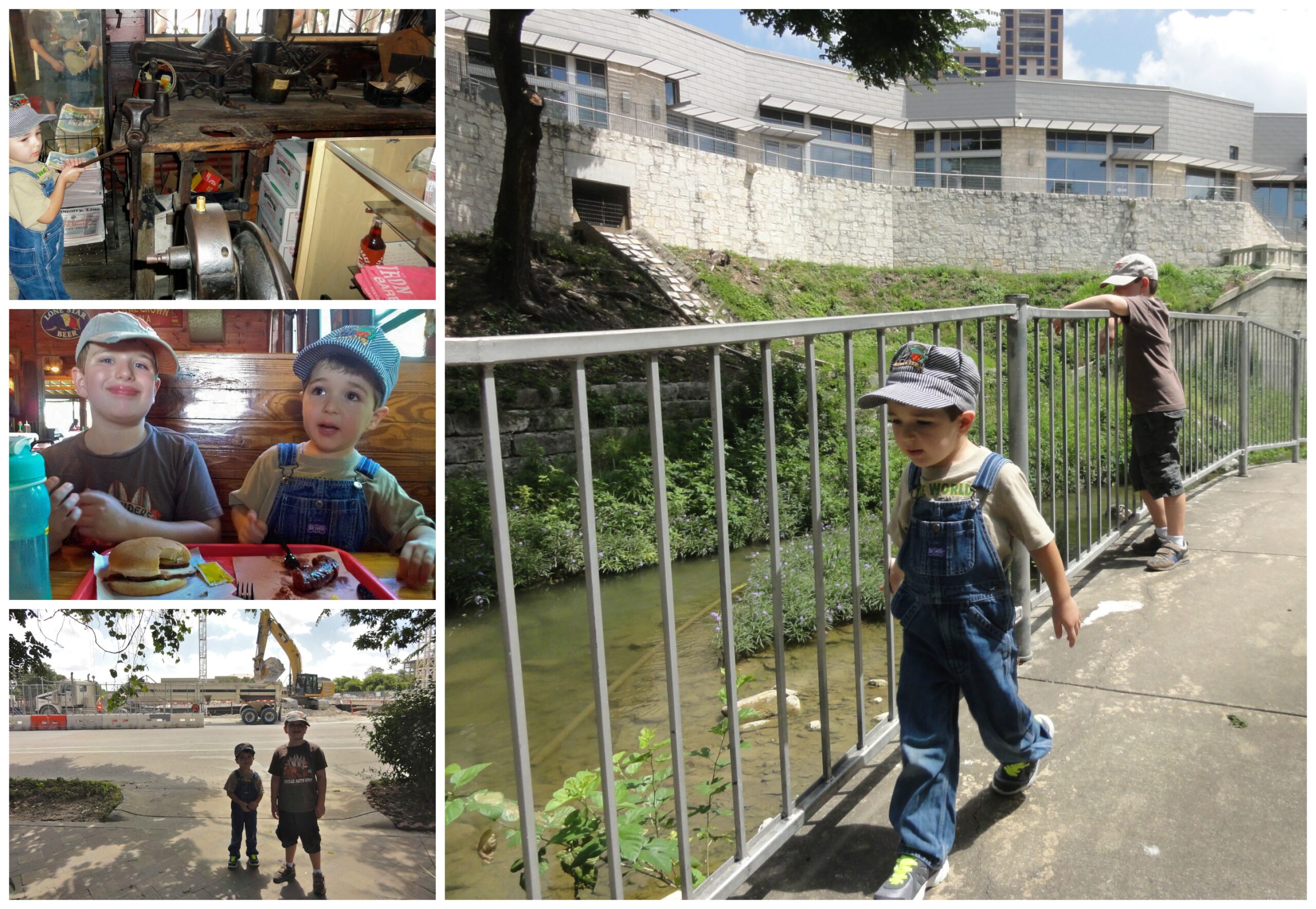 As luck would have it, we walked past the Central Fire Station during a shift change and got to visit with a couple of exceptionally kind fire fighters who let my boys snoop around their trucks. (Note: We totally lucked into this part of our adventure and were invited by the firefighters to visit. Please, please, please don’t drop by the station and tell them I said they’d do that for everyone.) After being sidetracked by fire trucks, we arrived at the Austin Fire Museum. This little hole in the wall is located inside the station–accessed by a dedicated entrance on 5th Street–and worth a look. The curator was thrilled to see us and encouraged my boys to take their time perusing the museum’s two rooms. Most of the historical exhibits were beyond their interest levels but there was turnout gear to try on, equipment to touch, and footage to watch of real Austin firefighters in action. 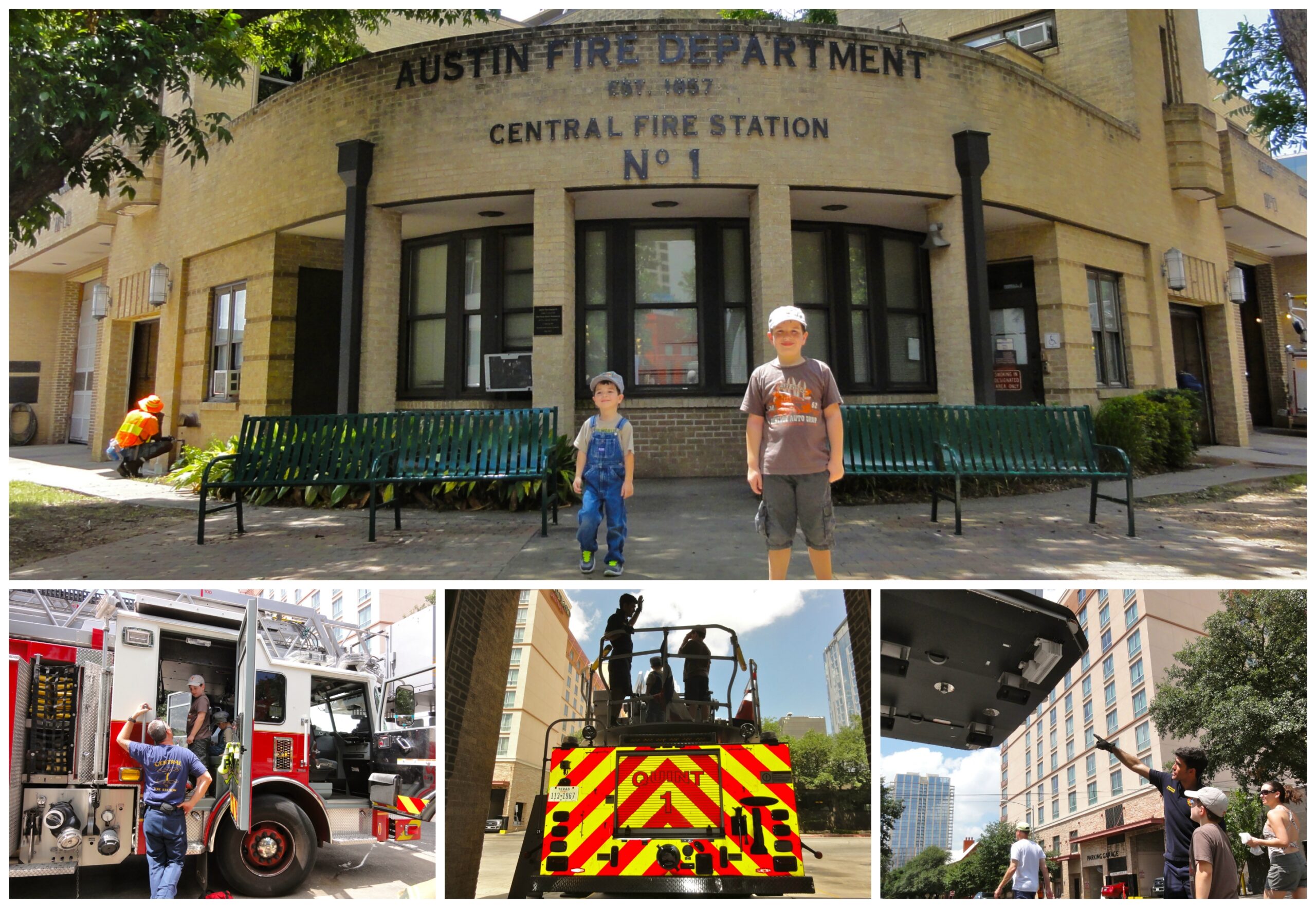 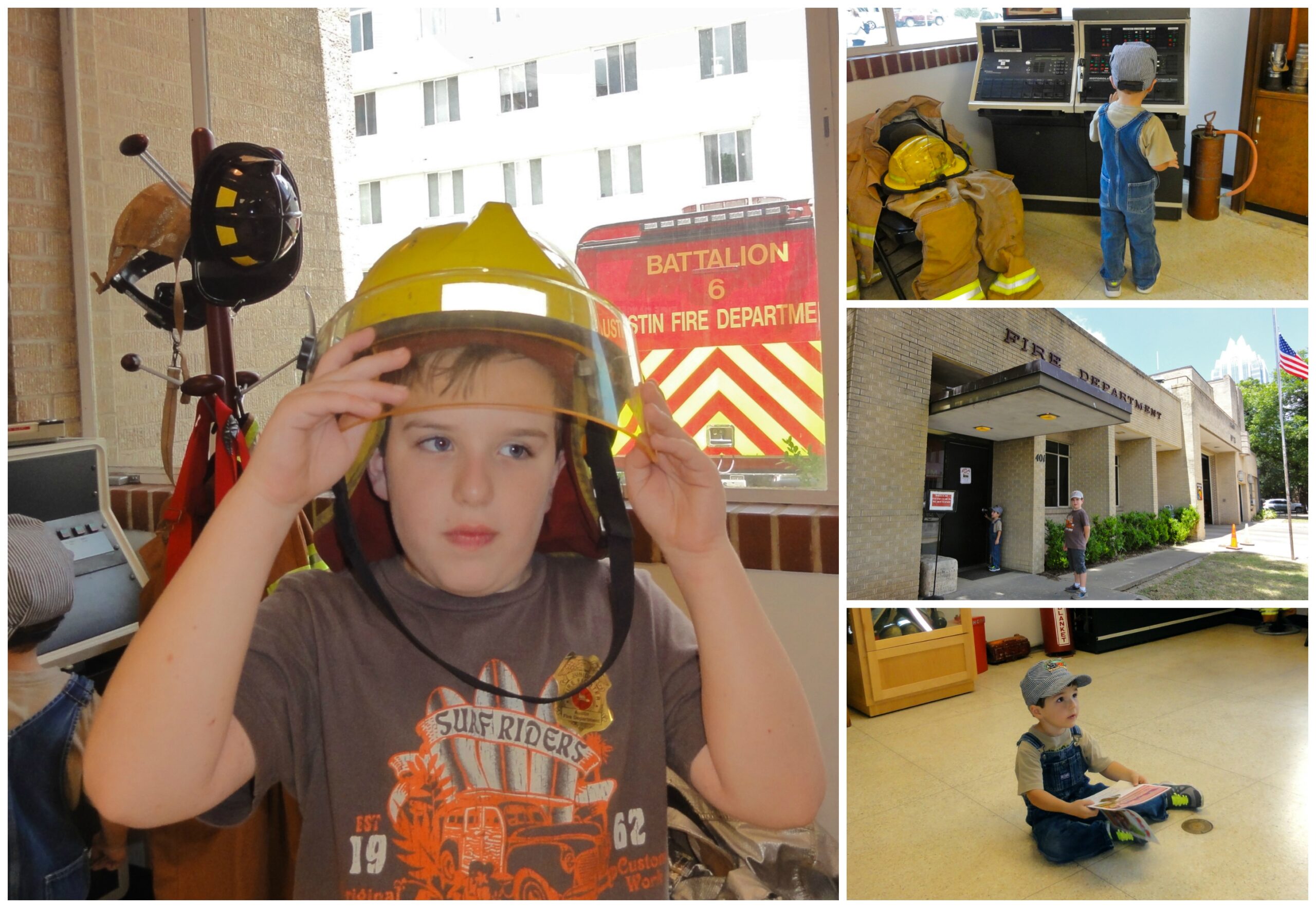 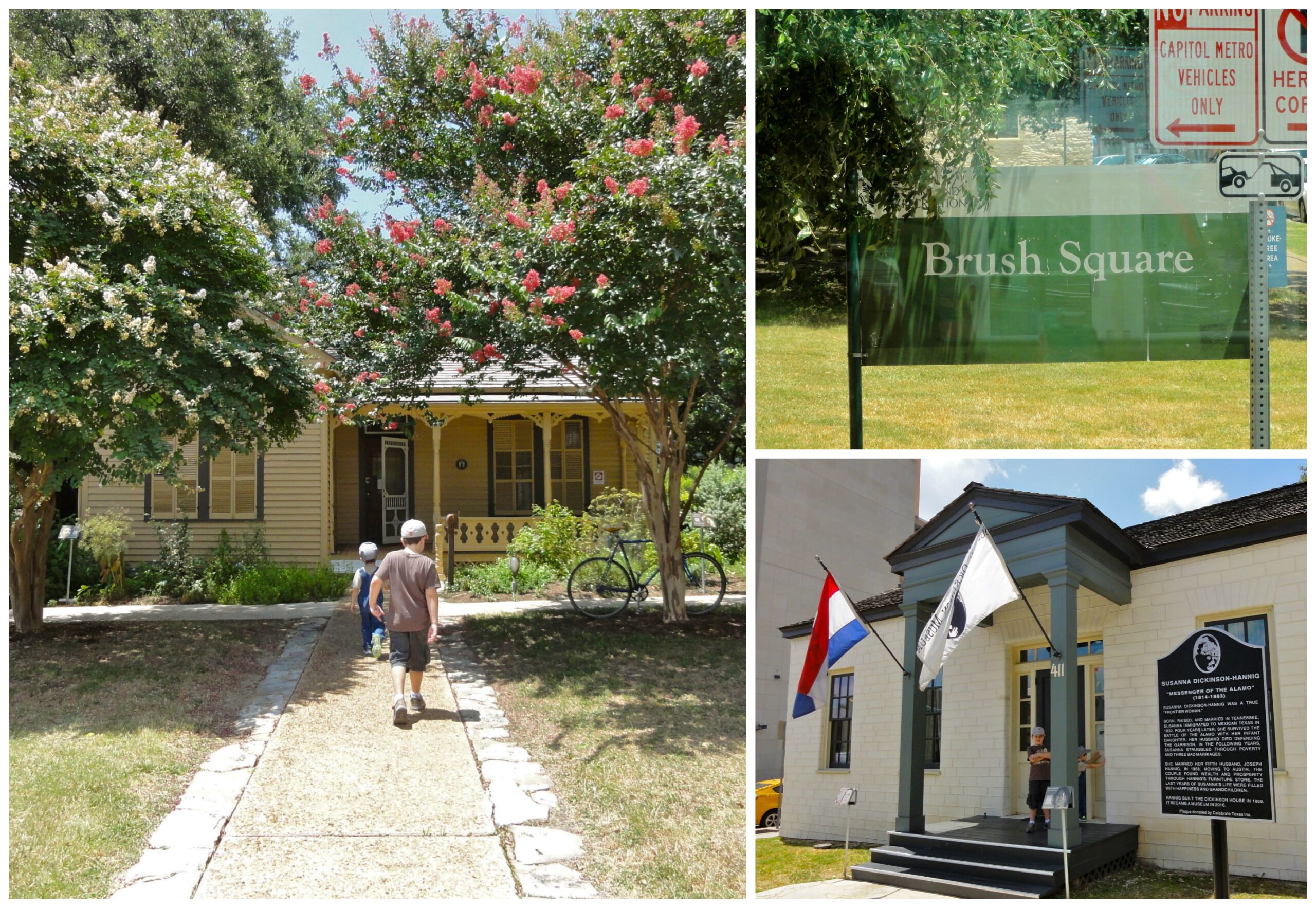 Our next stop was right next door at the O. Henry Museum. This quaint little house was staffed by an enthusiastic docent who gave us a comical demonstration of how to use an antique collar crimper. I got the sense he was happy to entertain us, but I was anxious to make an exit before my kids had the opportunity to break anything. They are too young to appreciate O. Henry just yet, but they did like exploring the old house and marveling at its period-appropriate furniture and household items. Unless you have older or exceptionally well-behaved kids, I’d recommend skipping this one and coming back without the kids in tow. The same is true of our last stop, the Susanna Dickinson Museum. There were fewer obviously breakable items there, which was a relief, but there was really nothing to hold my boys’ interest. Even if you skip the museums, you can still enjoy Brush Square’s lovely lawn area and nice shade trees. 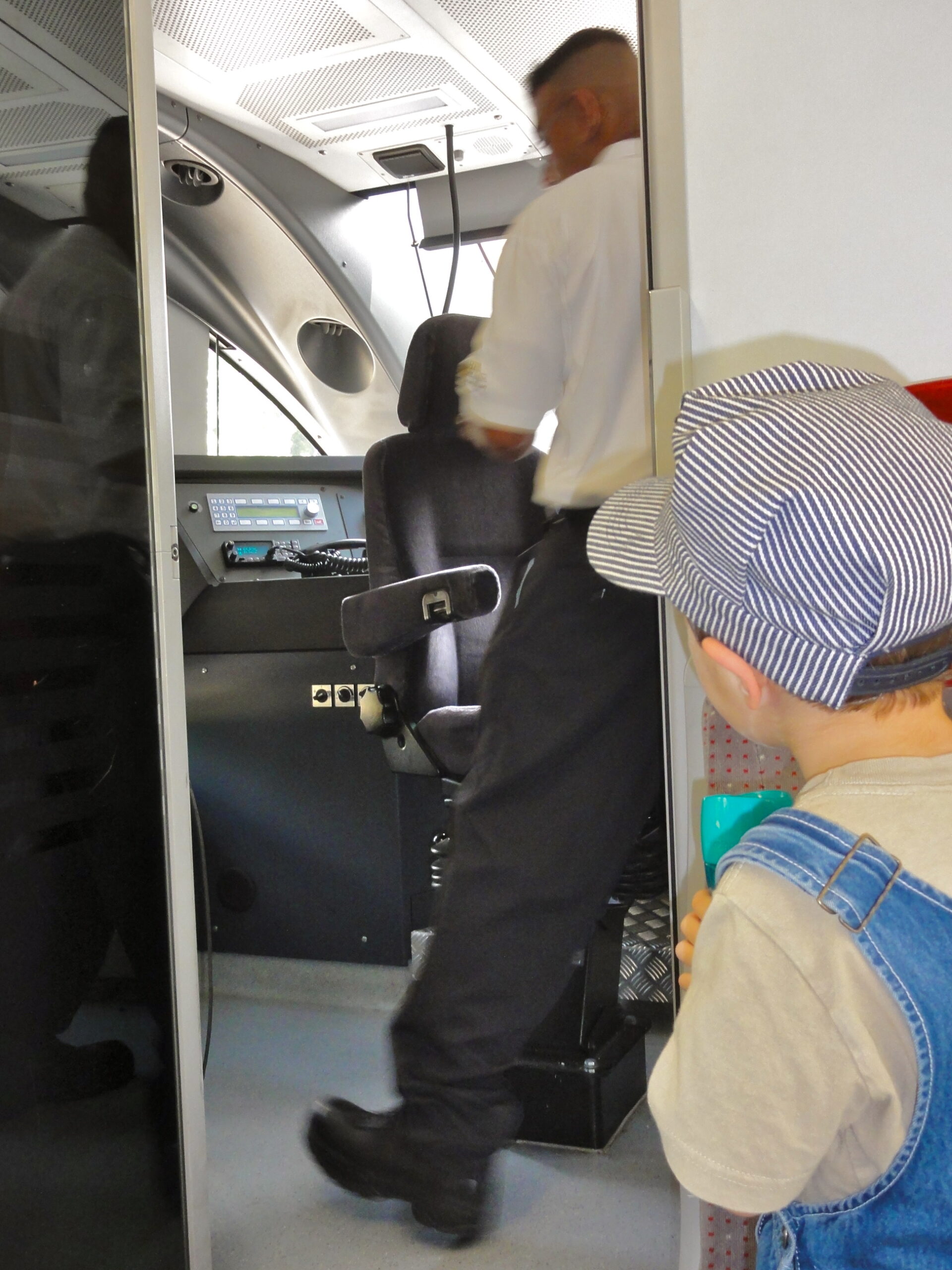 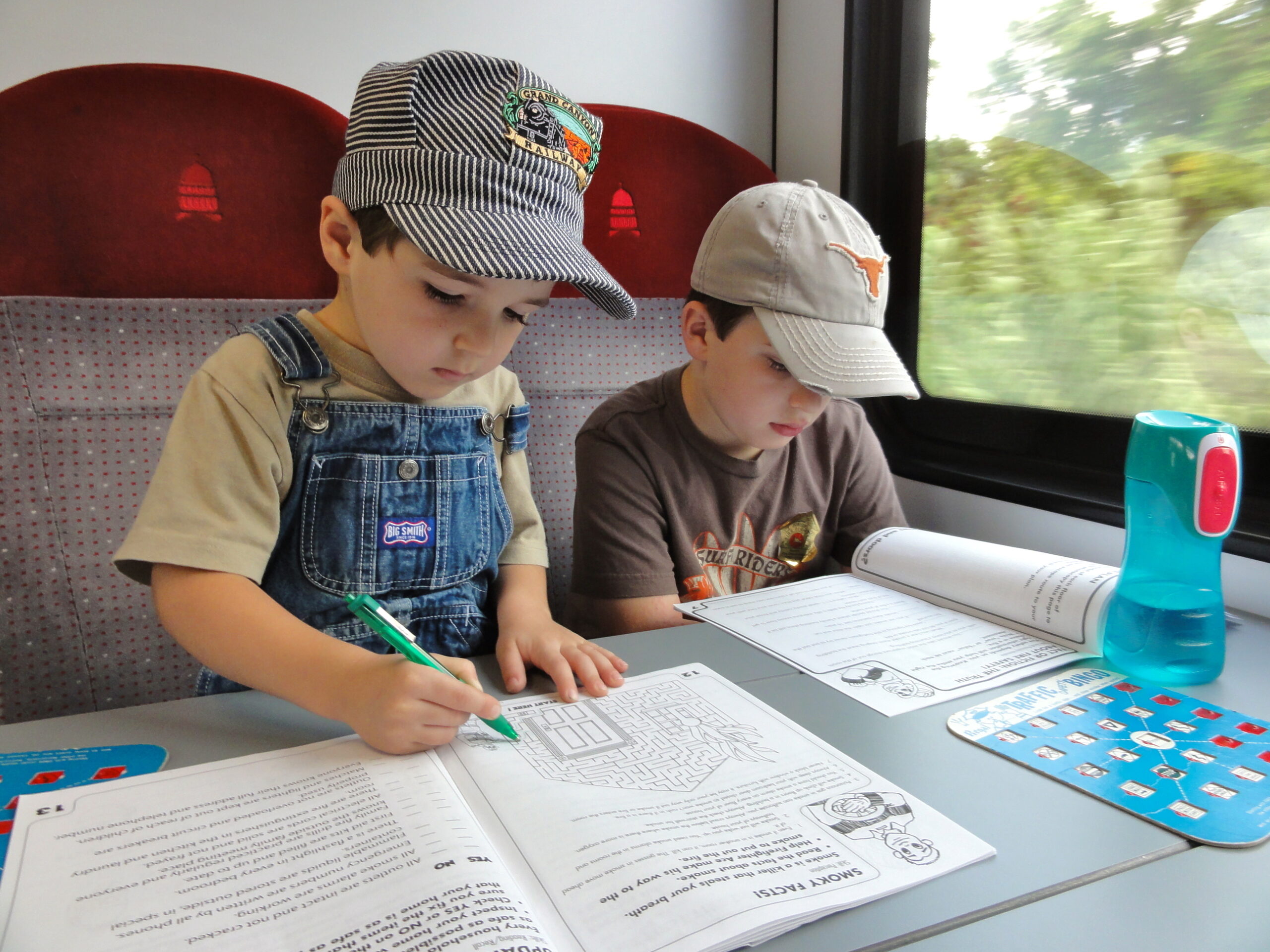 As the time of our departure drew near, we crossed 4th Street from Brush Square and were back at the MetroRail station. Because we bought day passes, we didn’t have to visit the ticket machine again before boarding the train. On our return trip we made the fantastic discovery that there are two tables, with four seats each, in the first and last cars of the train. These seats put us right next to the engineer’s cab, so my boys got to peek at the controls from a safe distance and ask the engineer some questions until it was time to depart. (Note: The engineer sits on one end of the train when traveling southbound, then moves to the other end of the train to travel northbound. Again, we were lucky to have a friendly and patient engineer. I can’t promise they’ll all be that way.) Since we had the added comfort of a table top, my exhausted boys spent most of the ride back coloring and solving puzzles in the activity books they received at Austin Fire Museum. Back at Howard Station, before even making it to our car in the parking lot, they already wanted to know, “When can we ride again?!?” 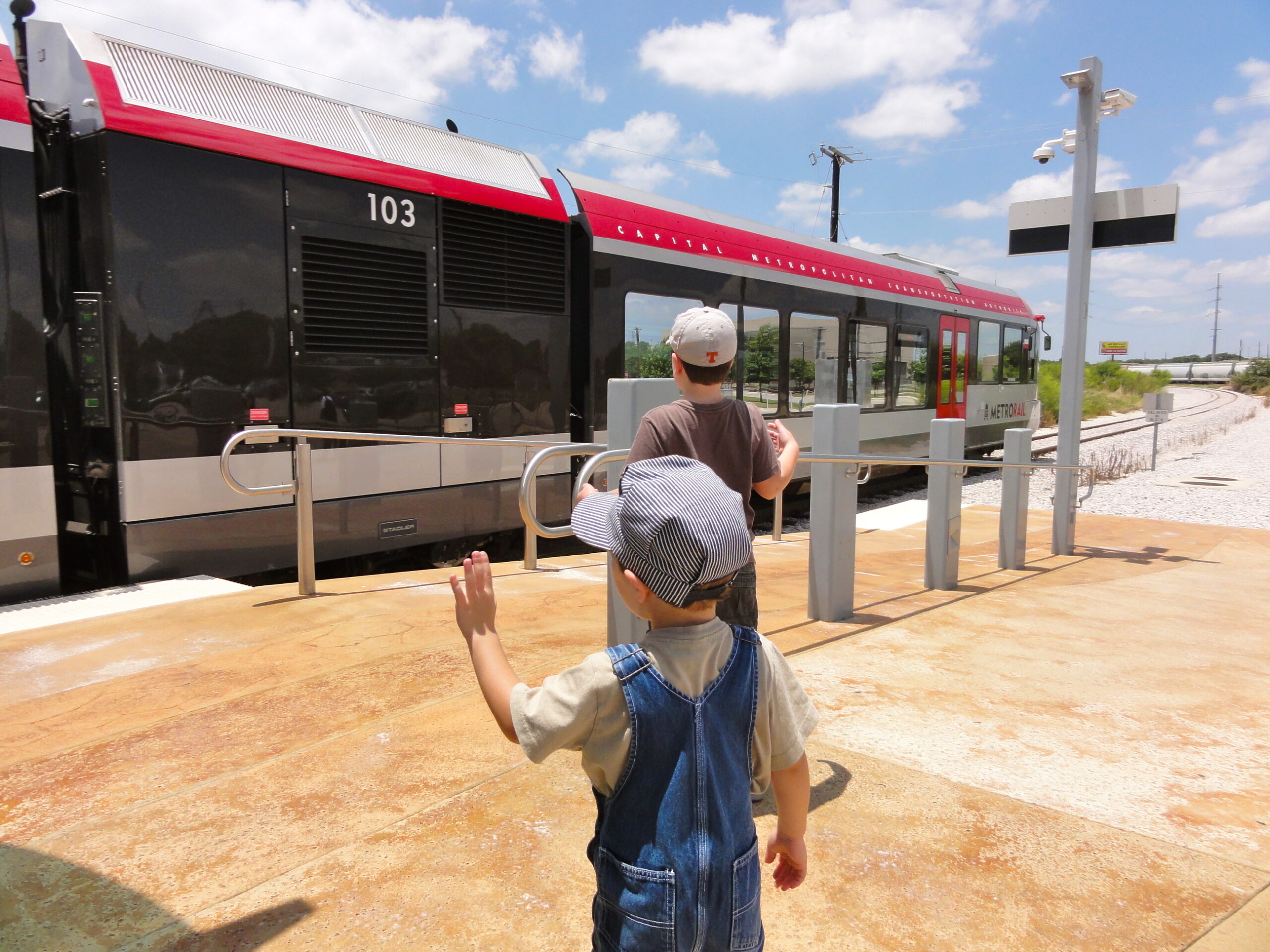