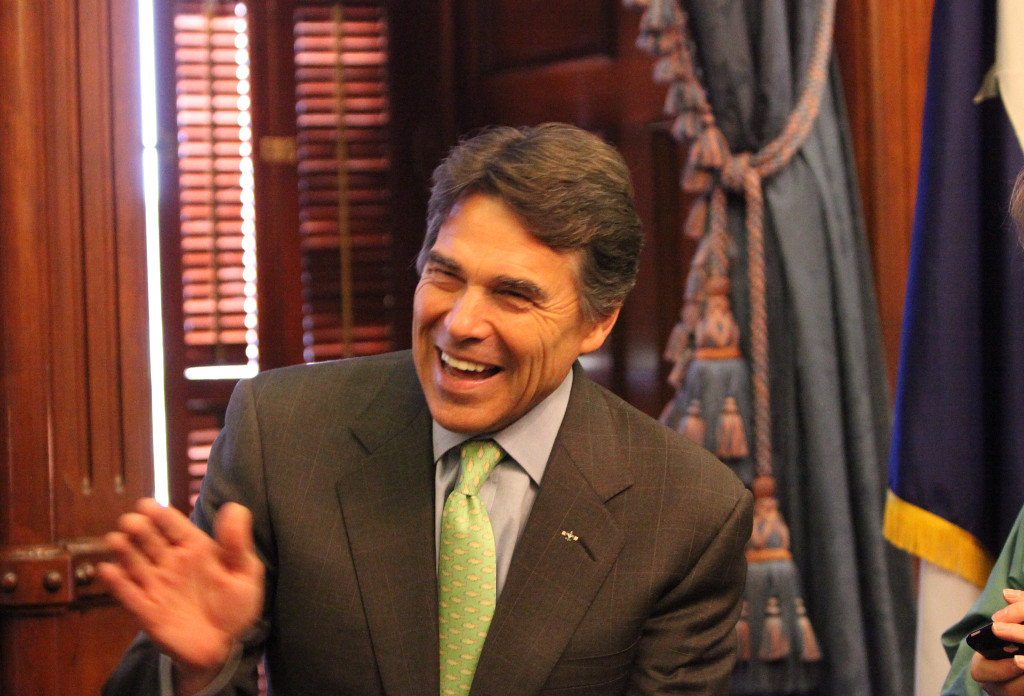 So, Obama’s Austin Fistbump Started As a Gay Joke About Perry

Editor’s note: This is our first post from Austin writer and comedian Daniel Webb, who got President Obama’s attention recently by shouting out his support for marriage equality from behind the register at Franklin BBQ. That bold move earned Daniel a fistbump seen ’round the world, a litany of new admirers in town and a writing gig at Austin.com. We are looking forward to seeing his byline around these parts more often. I have lived in the great state of Texas my whole life. My family’s history in Texas goes back many generations. I am proud to be Texan.

However, Texas Governor Rick Perry has publicly called homosexuality a disease. Now his protege, Attorney General Greg Abbott, is running for governor and bragging about how he’s appealed a recent Texas court ruling that overturned the statewide ban on marriage equality. To make matters worse, the Texas Republican Party announced in Fort Worth last June that their new platform would include text encouraging the use of gay-conversion therapy, a widely discredited “practice” based on shaming confused people into denying who they really are, which can be terribly harmful to their mental health.

So, Texas is arguably an anti-gay state. I am not proud of this.

Technically, I never came out of the closet. I thought performing on stage as 1940’s Broadway actress Carmen Miranda at the age of 9 said enough about who I am, even at that age. I’ve never felt I owed anyone an explanation as to how I like to have sex,  and I have always resented the implication that I should be shamefully “trapped in the closet” without making some kind of formal announcement about my sexuality.

You could say that I have never thought of myself as closeted, so I’ve never lived a closeted life. I resist labels because I’m tired of seeing how other people can politicize those labels. I have always avoided labeling myself as anything, because I am truly waiting for the day when my sexuality is something that can be taken for granted.

Then, one day not long ago, the President of the United States dropped by my job and asked for some barbecue.

By some stroke of luck, I was running the cash register that day and had an opportunity to speak to him. I could have said anything to the President — I’m mad about a lot of shit. I could’ve said, “Don’t send our troops back to Iraq!” Or, “Tell those Wall Street vampires to give us back our country!” I could have asked if Beyonce’s weave looks as flawless in person as it does on TV.  But I didn’t.

I said to President Obama, “Equal rights for gay people!” And as a second-class citizen in the state of Texas, I meant what I said.

Obama gets a fist pump as he pays for his lunch during a surprise visit to Franklin Barbecue in Texas #obamaaustin pic.twitter.com/sPUAMIAm2S

Admittedly, I wasn’t really trying to make a statement. I was trying to squeeze in a gay joke about Rick Perry. In Texas, those jokes are a dime a dozen. Everyone who dislikes our longest-serving governor ever has heard them. But then the President did something unexpected. Barack Hussein Obama asked me if I was gay. I mean, who does that?

Personally, I don’t like being asked that question for a myriad of reasons, so I have a healthy stock of mouthy retorts at the ready. Without even thinking, I replied: “Only when I’m having sex!”

Less than 24 hours later, there were international reports being filed about “the gay guy in Austin who fisted the President.” Well, actually the headlines were more like: “President Obama Fist Bumps 32-Year-Old Gay Cashier.” Ouch.

And just like that, I came out of the closet.

Friends congratulated me, family members told me they were proud, and the people of Austin were nothing but supportive. A woman even stopped me in an Austin grocery store and told me what I did “took balls!” On top of all that, I received tons of messages from strangers thanking me for standing up for gay rights. People I’ve never met wrote to let me know that my speaking out was important to them. Strangers told me I had made them proud.

Suddenly, almost embarrassingly, I realized how important it still is to “come out of the closet,” even now in 2014. Coming out enables our own equality and gives hope to others. Sadly, the LGBT community is still fighting for equality, especially in the anti-gay state of Texas.

But even so, I would not have this unique experience if I lived somewhere else. The amazing responses from people in this city make me more proud to be an Austinite than ever before.
——

All opinions expressed in editorial content published on Austin.com are solely those of the credited author(s) and not representative of the staff, owners or management. Feel like speaking back? Connect with us on Twitter or Facebook.