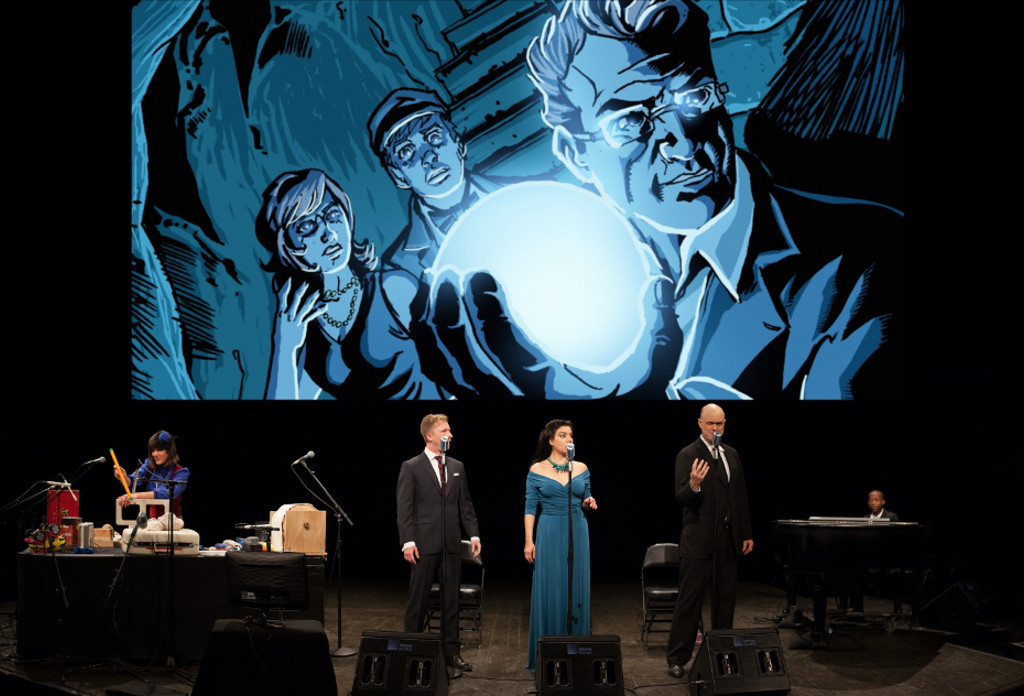 OMG N00b! You Must Check Out Nerd Nite Austin!

What happens when a bunch of nerds get together at a large venue stocked with food and booze, bent on the idea that they’re going to throw a party?

Nerd Nite Austin is the answer.

“Nerd Nite is a monthly event held in more than 75 cities across the globe during which several folks give 18-21-minute fun-yet-informative presentations across all disciplines – while the audience drinks along. And there are often bands, acrobats, trivia, and other shenanigans as well.  Imagine learning about everything from math feuds or the science of the Simpsons, to the genealogy of Godzilla or debunking beer myths.” I attended my first Nerd Nite at The North Door in Austin recently and was treated to a sneak peek of “The Intergalactic Nemesis, Book III: Twin Infinity,” which is due to premiere at the Long Center for the Arts on September 5th.

The premise is a “live-action graphic novel” that blends comic book imagery with live voice acting, music and sound. At first, one might feel thrust back to the 1930s, in a studio watching a live radio show. After you’ve had a good minute or two to soak everything in, it’s easy to become enthralled by the Foley artist, who becomes like a mystical DJ breathing life into the projected imagery. Once all the elements have grabbed hold, the experience feels as if you are participant on stage creating the story.

I learned that virtually anything can be used to mimic sounds. For example a box of macaroni held horizontally and shaken sounds like train moving on tracks.  Take the macaroni out of the box, boil it, grab it with your hands (after it’s cooled, of course), and squeeze it to replicate any kind of gross, slimly sound you want to mimic.  After the teaser and talks, the nerds teamed up and bravely improvised voice and sound over random YouTube clips. Everybody was a winner.

It is rare these days that people are provoked to use their imagination during large gatherings, which makes Nerd Nite stand out that much more. Looking back, my experience watching “The Intergalactic Nemesis” play out was the richest form of entertainment I have ever witnessed.

If that’s an appealing proposition to you, then Nerd Nite Austin is not to be missed.