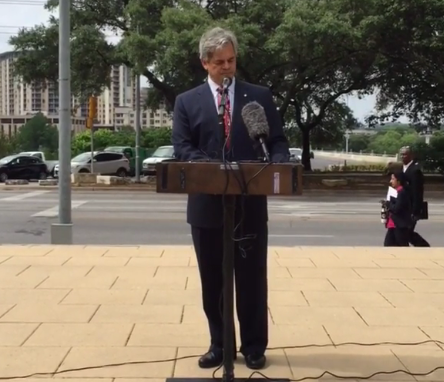 This May voting cycle, which started today with early voting, cannot be over soon enough. The Prop 1 vote about ridesharing companies has been dominating headlines, and today’s headlines have been taken over by Mayor Steve Adler coming out “against” Prop 1. In a statement released this morning, Adler essentially said that he doesn’t think that either vote is the sufficient choice, but that voting against brings everyone back to the table to discuss better solutions. Basically, he is calling the bluff of ridesharing agencies Uber and Lyft and their millions of dollars in advocating efforts.

Watch his announcement above, and read his full statement here. The statement includes his thoughts on how this vote affects Austin’s Smart Cities Mobility Challenge proposal. Adler focuses on Austin’s ability to come up with innovative solutions as we saw him demonstrate with his successful attempt to curtail traffic during SXSW this year.

Where do you stand on the volatile Prop 1 debate?