Shortly after, he bought the business and renamed it Jurassic Car Wash — he wanted to make it into something different. He brought in animatronic dinosaurs that he had in his garage (though he originally placed them in his front yard at home) and began creating the car wash that Austinites have grown to love since it opened its doors in 2015.

Borek describes himself as “a kid at heart,” so it feels fitting that he would open a unique car wash, as he is a collector of things that are associated with childhood.

Borek recalls how he first got started in business. He says, “when I was in high school, I knew I wasn’t going to go to college, and so I figured I would do something with my hands, and back then everybody was taking auto mechanic classes. So, in the 10th grade I asked to take auto body classes, but the instructor wouldn’t let me because juniors and seniors had seniority. So, I went to the vocational counselor and they said ‘why don’t you go to Travis High School for a year and take auto body classes’ and so I did.”

“In my 12th grade year, I got a job working at a place called Austin VeeDub and I worked there for a year or two, and the owner sold and fixed wrecked cars, and so I ended up buying cars from him and fixing them up and selling them out of my parent’s car port, until a city inspector showed up and said that you can’t paint in the garage anymore,” Borek recalls. “So I had to rent a building, and there was a guy down the street who got busted the same time I did who was doing used car work. I was 19 and he was 55 and neither one of us could get a job, so we rented a building that was 1,250 square feet and the rest is history. It grew into 1,600 square feet, 24 employees, and 4 and a half million dollars 30 years later. It was a lot of luck and really hard work.” 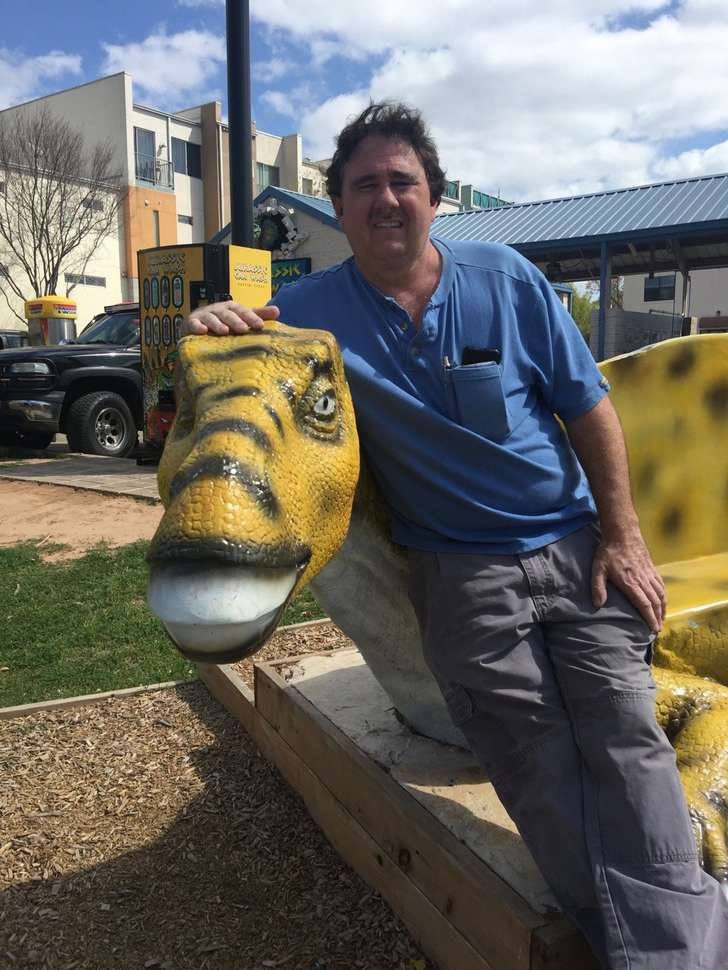 While the hard work has paid off, the aspect of his new venture that stands out the most is the dinosaurs. Borek tells us that “one of the things that I used to do for years, was I built a flying saucer and put it in my neighborhood on Halloween. After about five years of noise and smoke, I wanted to do something different, so I ordered these two animatronic dinosaurs and I put them in my front yard and people would stop and take pictures since they move and growl. Next thing you know, I’m getting nasty letters and phone calls from the neighborhood association, saying that you need to go through theArchitectural Control Committee. I’m the kind of guy that if someone pushes I’m going to push back, so I left them there. When I bought the car wash, I brought them in.”

On the company’s Facebook page Borek hasn’t been shy about advertising how Jurassic Car Wash takes creative measures to keep the customers coming. Of course, had to ask about the famous Batmobile that has made a few appearances.

“We built a Batmobile, just to see if it could be done. Originally, I was going to rent it out and see if I could make money with it, but then I figured that I really didn’t need the money. It’s actually copyrighted by two different people, DC Comics and Warner Brothers, and they won’t go after anyone if you’re not actually making money with it, so I figured that I would just it for charity,” Borek explained. “We do a Sunshine Kids Camp run, and I pretty much only use it for sick kids as well. I bring it up here every once in a while, it really doesn’t help business here, it actually creates a giant cluster. If I put it between the two dinosaurs out front, people will stop in the middle of road.”

Borek is clearly a passionate man who not only enjoys his work, but finds purpose in it, an important component of any successful business. Whether you are looking to simply get your car washed or looking to delight the kids with a fun experience, Jurassic Car Wash is the Keeping Austin Weird business to frequent.

Jurassic Car Wash is located at 4809 South Congress and is open 24 hours.