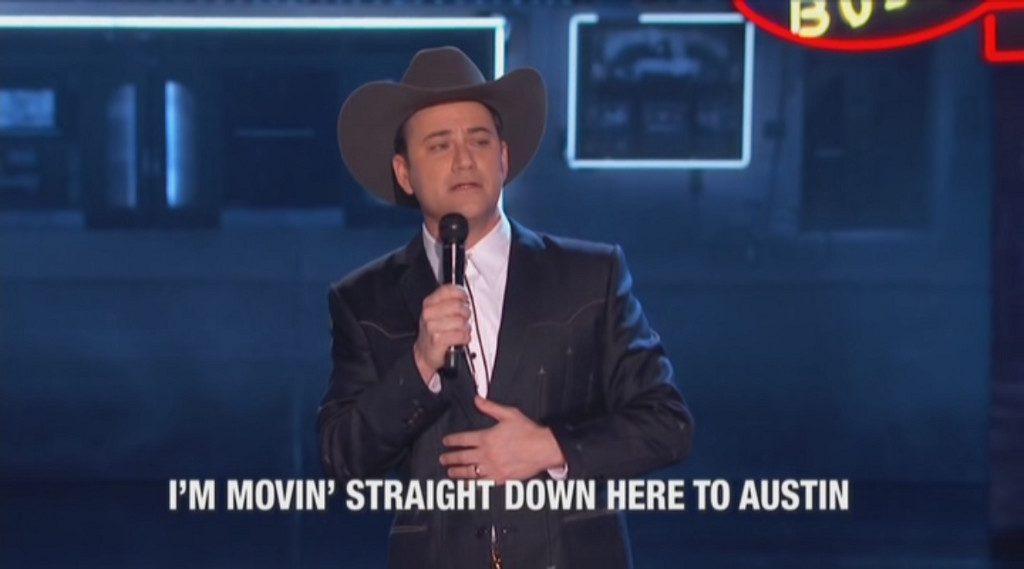 Last week’s episodes of Jimmy Kimmel Live here in Austin during SXSW were pretty dang epic, but this one bit from Friday night’s show really, REALLY got us in the feels.

Less than 10 minutes into Friday’s episode, Kimmel walloped the local crowd with an opener that’d be more fitting to close his show. Standing center stage, he began to sing “To Austin, “I Can’t Love You More,” only to be joined by Willie Nelson for a truly magical number.

During the song, Kimmel hinted at moving to Austin in a funny-but-not-so-funny nod to climate change. “If the ice caps keep defrosting, and L.A. falls into the sea, I’m moving straight down here to Austin, and bringing Guillermo here with me.”

“I dedicate this song to Willie Nelson’s bong,” Kimmel added. “To Austin, we can’t love you more.” We love you too, Jimmy.

Silly as it sounds, the effects of Earth’s changing climate are already taking a serious toll on L.A. — not to mention, um, everywhere else. So, does that mean Kimmel’s move to Austin is inevitable? Maybe! Is that a good thing? No! But at least we’ll have Kimmel.

While that’s all apocalyptic and whatnot, at least the owners of Doc’s on South Congress sort-of approve of Kimmel’s fallback plan. That’s good enough for us.

Watch the video below: