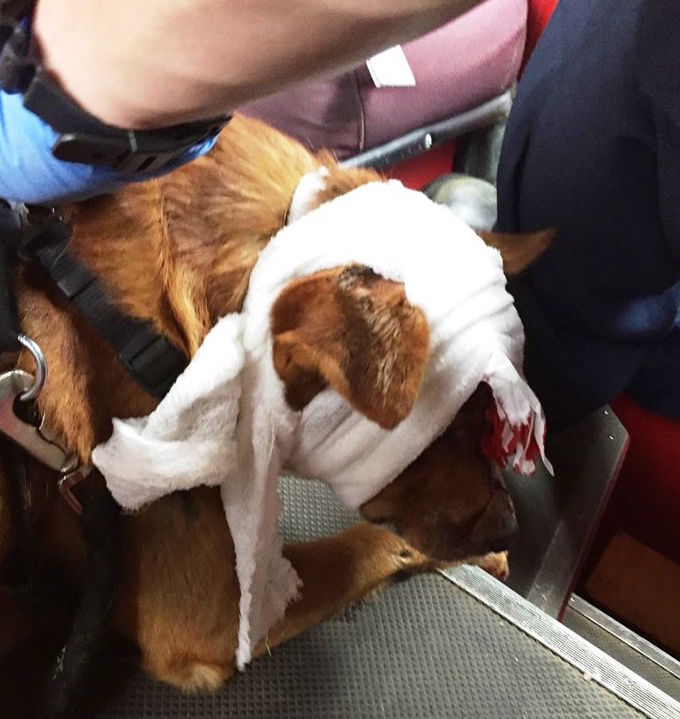 Yesterday the Austin Fire Department dealt with a somewhat unusual situation with results that probably shouldn’t surprise any Austinite. After sustaining an injury in an auto accident, a man’s dog ran away from the scene, and like any proper dog-loving Austinite, the man quickly followed.

Here’s how it all went down, as relayed on the AFD Facebook page:

Yesterday afternoon, Engine 1 and Engine 6 on the B shift were sent to a collision at Barton Springs and Riverside. As they arrive, our crews are told that the driver of the truck involved, and who was injured, had left the scene in pursuit of his dog who escaped the truck and left at a high rate of speed. Another bystander then tells Engine 1 that the owner/patient is now a couple blocks away, and the dog has been hit by a car with some pretty serious-sounding injuries.

Engine 1 finds both in a parking lot–the dog suffering some rather messy head/face lacerations, and the owner, although needing care and evaluation, being uncooperative since his attention was focused on the dog. Engine 1 was able to gain the owner’s trust by assuring him that they would look after the dog so he could be transported.

Our crews dressed the dog’s wounds, located a nearby emergency vet clinic, and transported the dog in the engine the several blocks there. The owner was contacted by our crew, who told him where the animal would be, as well as his condition, made sure all parties were okay with the arrangement, and passed the owner’s information on to the vet’s office.

We’re happy to report that the dog and his owner are both expected to make full recoveries. Just another example of the kind of commitment and dedication to service you see every day from the awesome men and women of the Austin Fire Department!

In Austin, this scenario probably isn’t all that strange considering how much we love our dogs. Many of us wouldn’t hesitate for a second to run after a hurt fur baby, consequences be damned. Many of the commenters relayed that they would react exactly as this man had, saying that their pet’s health and safety would come first.

The post drew plenty of praise for AFD from Facebook fans, and there appeared to be no criticism of anyone involved — dog rescue stories will do that. Either that or all the trolls are hanging out under the Reddit bridge today.

Commenters called AFD heroes and rock stars, and more than one person said that it was this type of love, kindness, and compassion that makes people want to move to Austin.

It wasn’t just AFD who showed big hearts yesterday. Commenter Anna Madrigal saw the whole thing go down and mentioned that she, as well as quite a few other good samaritans, stopped to help the dog. In her comment she says:

PAWS UP TO SEVERAL CARS AND GOOD SAMARITANS WHO STOPPED TO HELP THIS DOG! There were at least 10 ppl already gathered where the dog had been hit.Someone was holding on to his leash, comforting him and keeping him from running off again, while another was trying to stop the bleeding. I saw the owner RUN across the parking lots and streets to get to his dog. Several were already discussing where the nearest vet was right as the Austin Fire Department came to the rescue. Great news.

Nice work all around, Austin. Paws up, indeed.