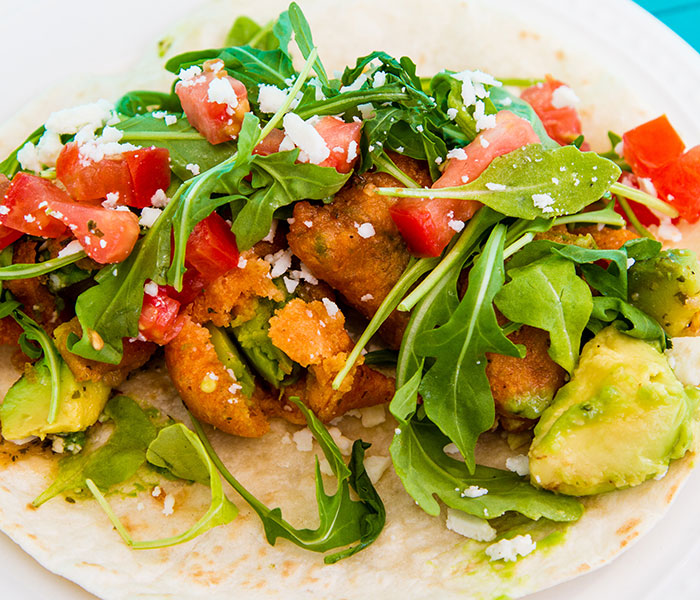 In case you missed it, Austin’s own Torchy’s Tacos and the good people at Fun Fun Fun Fest created a cannon that fires tacos back in 2012. It was fun, news stories were written, photos and videos were taken, but everyone quickly went back to their normal lives because it was just another weird and cool thing in a city full of weird and cool things.

Nebraskans, however, are freaking out about the taco cannon, but it isn’t ours. Last week, Omaha’s Voodoo Tacos — which has a menu that’s very similar to Torchy’s — took their ATX impersonation to another level with a much smaller taco cannon that looks more like a potato gun. Cornhuskers and Durango-ies got SO worked up that even the national press took note, joining the choir in praise of this marvelous taco innovation. Huffington Post went so far as to slap Torchy’s slogan on a tweet about Voodoo. (For the record, Torchy’s and Fun Fun Fun also fought each other over who owns the trademark to “taco cannon,” and Torchy’s has sued a competitor for allegedly ripping off their menu, so this tangle over tacos is actually serious business.)

Clearly, something had to be done. So, the folks at Fun Fun Fun Fest launched @TheTacoCannon account on Twitter to set the record straight. Thus, the #TacoTruth movement was born. Being Austin.com, we’re duty bound to weigh in heavily on one side of this debate. So, first, let’s look at these taco cannons.

We’re biased, but ours is clearly better:

Now, in the spirit of friendly competition and acceptance that our city is universally known for, we’re not going to pick on these Nebraskans too much. After all, they have to suffer, you know, living in Nebraska. But we are in a great position to give them some Austin taco tips. Instead of continuing to embarrass their whole state with inferior, bootleg taco technology, Nebraska should (*ahem*) “borrow” some of these ideas instead…
——

5.) Spaghetti Does Not Belong On Tacos

My names Sophie and I like #food #nomnoms #tacos #chipsandguac #voodootacos

See the taco near the bottom of that photo above? That’s a spaghetti taco from Voodoo in Omaha. Yes. A Spaghetti taco is on their menu. The person who posted that photo got a reply from Instagram user remstars, who reasonably suggests: “dont share wif me.” SECONDED.

Words really cannot describe how this makes us feel, so we’ll use a .gif instead…

4.) If You’re Going To Copy Someone, Do It Better

Looking at Voodoo’s menu, a few items jump out at us. Not only do they have near every Torchy’s staple, they also have a nearly identical shrimp taco of the same exact name.

Nebraska, you are host to the Vanilla Ice of taco joints.

3.) Swiss Delicacies Are Not Tacos

Like, this is basic stuff here. Voodoo’s “taco of the month” (another marketing tool “borrowed” from Torchy’s) is the “Cordon Bleu,” with fried chicken, ham, cheese, and some other stuff nobody cares about. Cordon bleu dishes are supposed to be a Swiss delicacy. But when cordon bleu is not prepared as a delicacy, we’re usually talking about an Arby’s sandwich (don’t click that if you’ve recently eaten). Voodoo has apparently done this now in taco form, for some reason. Sure, Torchy’s “taco of the month” right now is “The Roscoe” — a very Los Angeles joint featuring chicken, waffles, bacon, and maple syrup — but that’s still cool with us. Why?

2.) You’ve Got The Taco’s Velocity And Aerodynamics All Wrong

Voodoo’s bootleg taco cannon apparently mangles their product en route to presumably drunken sports fans. “I wouldn’t say it would be as restaurant quality when it gets to them, but it’s edible,” the owner told CNN. Maybe that’s why they later warned on Twitter…

Someone will take a taco to the face. pic.twitter.com/MOqwzJ5elC — Voodoo Taco (@TacoVoodoo) April 22, 2015

In other words, if there’s already a lot to make up for, adding thrust isn’t going to help your taco cause unless you’ve really nailed those taco aerodynamics, not to mention the escape velocity. Our taco cannon fired up and out, but this one shoots straight. Maybe not hitting people in the face with alleged food is just assumed here in Austin because we’re all nerdy hipsters, and those kinds of calculations are obvious to us? It remains unclear. Of course, this piece of advice no longer applies if Voodoo’s owner actually means that having a red cow stand on its hind legs as it fires a wadded-up Arby’s sandwich out of a mutant leaf blower at extremely high speed directly at your face is an experience somewhat comparable to sitting down and eating at their restaurant. In that case, please proceed.

1.) Listen To The Experts (Hint: They’re From Austin)

We’ve been gnawing on Voodoo for stealing Austin’s taco cannon thunder, but we’re too smart to find ourselves in Nebraska, so we can’t claim to have intimate knowledge of these alleged foodstuffs. The real Voodoo victim here isn’t Torchy’s or Fun Fun Fun Fest — it’s any Austinite who mistakenly stopped by for a little taste of home, like this poor soul…

Ate at VooDoo tacos in Nebraska hoping to find taco heaven. Unfortunately it was a sad, sad experience. Made me miss @TorchyTaco even more — Stacy (@stacyut25) September 8, 2014

We’ll give the folks at Voodoo this much: At least they showed “mad respect” on Twitter when confronted with the #TacoTruth by an army of Texans. We may find their taco logic suspect, but anyone who gives credit where it is due is alright with us. And in all fairness, we had to search far and wide to find an image of their spaghetti taco (a reasonable thing to hide). The rest of their menu didn’t look half bad. It’s also hard to see how more tacos in the world can possibly be a bad thing. Unless there’s spaghetti involved. (*shudder*)

So let that be a lesson to ya. In the words of Fun Fun Fun Fest…