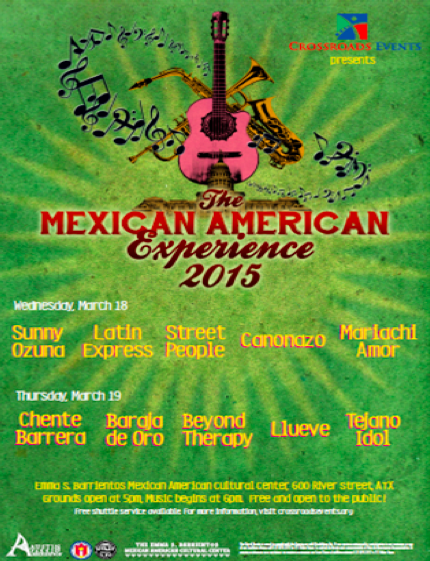 The Emma S. Barrientos Mexican American Cultural Center (MACC) and Crossroads Events are bringing back the successful two-day music production of the Mexican American Experience (MAE). This FREE event returns for the fifth continuous year to the grounds of the MACC, at 600 River St. Austin, TX 78701 on Wednesday, March 18th and Thursday, March 19th 2015.

The roster of artists in the showcase for Wednesday, March 18th includes Grammy winning artist Sunny and the Sunliners, Latin Express, and returning to the showcase from last year, Street People. The rising musicians, Cañonazo, featuring Robby Garza and Erika Santana, will take the stage after Mariachi Amor kicks off the showcase at 6 pm.

Music begins at 6pm on both days, with the grounds open to the public at 5 pm to attend the open air event in the Zocalo area of the cultural center along the north shores of Lady Bird Lake. Outside alcohol is not allowed at this event, nor are ice chests, as food and beverage vendors will be onsite.

Local community organizations will also be onsite, including Primero Health, Inc., Resistencia Bookstore, and the Austin Tejano Music Coalition, among others.

There will be some seating available in the Zocalo area, but attendees are encouraged to bring lawn chairs.

Free shuttle service is available from Sanchez Elementary, Mendez Middle School and Fiesta Gardens, as parking is by permit only on site at the ESB-MACC during the event. There is ADA parking at the MACC and is available on a first come – first served basis.

For additional information on The Mexican American Experience, visit the Crossroads Events website or call the Emma S. Barrientos Mexican American Cultural Center at 512-974-3772. (Music is subject to change.)

Music begins at 4pm on both days at the cultural center along the north shores of Lady Bird Lake. Outside alcohol is not allowed at this event, nor are ice chests, as vendors will be onsite with food and beverages available for attendees to purchase.

“El Rebelde del Acordeon” is bringing the cumbia beats to the Pan Americana Festival once more! Get your tias, tios and dancing shoes ready because Friday night is going out with a bang. It’s impossible to hear Celso’s name and not get excited as his songs can make anyone get up and dance. Native of Monterrey, Celso began his career 25 years ago and has reached many hearts and many feet including Gabriel Garcia Marquez.

Master Blaster is producing fresh sounds and beats for a new generation of cross-pollinated youth. Electronics, live beats and a full band push the live show envelope and serve as a bridge between DJ culture, live music performances and the cumbia underground. 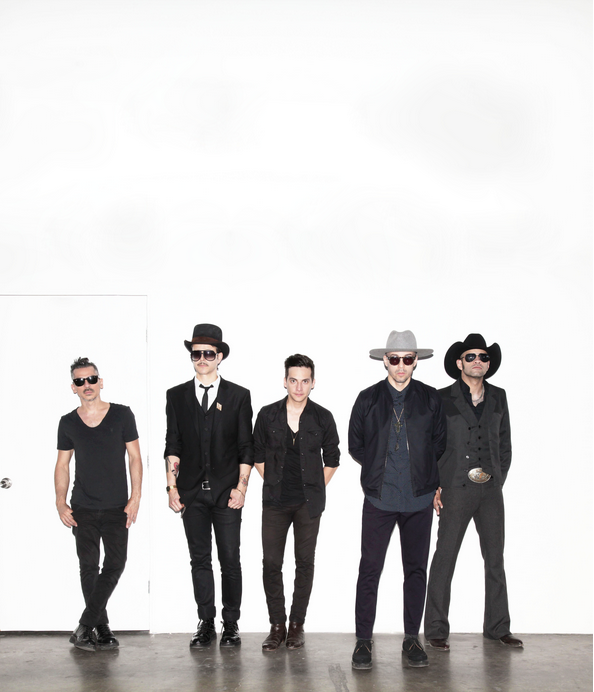 Kinky is a five-member band from Monterrey, Nuevo Leon, Mexico, formed in 1998 as part of the Avanzada Regia musical movement and consisting of Gilberto Cerezo, Ulises Lozano, Carlos Chairez, Omar Góngora, and Cesar Pliego. The band’s music is heavily influenced by Latin music, rock, dance and techno. Since the release of their studio album, Kinky have been signed with KIN-KON RECORDS and have just released their MTV Unplugged album. Get ready to jam this Saturday night!

With their suave Latin-lover antics, contagiously catchy covers, and original amalgamations of cumbiatrónica with norteña, you get an irresistible force to be reckoned with. If you know a thing or two about Latin alternative music, surely by now you must have heard of LOS MASTER PLUS, considered the new kings of cumbiatrónica.

Shuttles will be running to and from the MACC from 4–11pm.