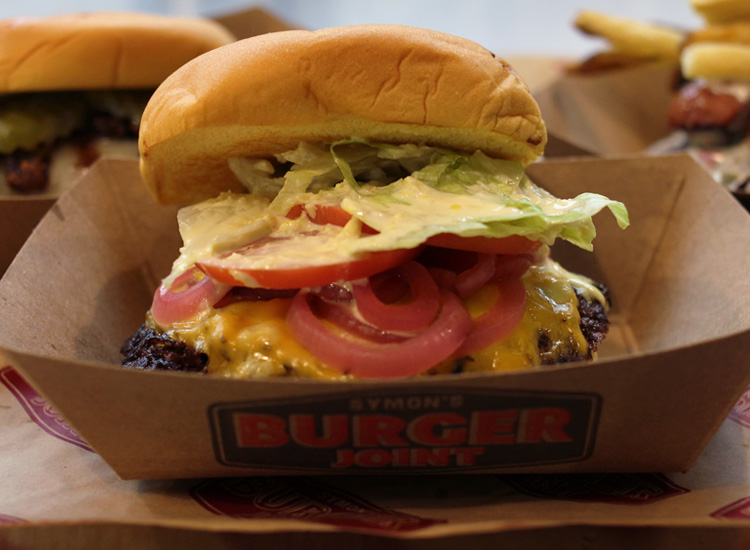 For Some Awesome Eats, Check Out Symon’s Burger Joint

I had the good fortune recently of sitting down with Chef Michael Symon to discuss his newest venture in Austin, Symon’s Burger Joint. Although he’s a native of Cleveland with restaurant concepts popping up all over the U.S. these days, Symon is a man who loves Austin, barbecue, and sourcing the very best meat he possibly can. And those are a few things we can get behind!

I wanted to ask you a couple of questions about Symon’s Burger Joint, opening in Austin soon. I know the concept that you’ve opened in other cities recently is called “B Spot,” and that’s concentrated in the midwest.

Yea, counting the ones in arenas, we have eight in Cleveland, two in Detroit, one in Columbus, and one in Indy. The concept that’s coming to Austin, however, is not B Spot. It’s called Symon’s, and it’s somewhat different, right?

Yeah. The B Spot is a full, sit-down restaurant. We have 20 beers on tap, there’s a few more menu items, and we offer sit-down service. When we were looking at the Austin location, we realized it worked better as a walk up window as opposed to a full service restaurant, so we tweaked the concept to meet the needs of the location better.

Is that what kind of appealed to you about the drag, being a high-traffic area?

Well, we love Austin. I have a lot of chef friends there, and have spent a lot of time in Austin over the years. The opportunity to do something in Austin was very exciting for us. Where it was located, by the campus, we wanted something that was more quick service. We felt like a quick service was a better concept to run. I’ve never eaten at a B Spot. But after glancing at their menu, i thought the burgers looked great. It’s not just meat and cheese on a bun; there’s an added dimension. Can we expect something similar from the burgers at Symon’s?

So, the beef we’re using is the same very high quality, naturally raised beef. No hormones, all of those things. The quality of the meat we’re using is going to carry over into Symon’s Burger Joint. The biggest difference, I would say. is that the B Spot Burger is more like a “Pub” burger. It’s a thicker cut, char-grilled burger you order by temp. The [new] burger joint is more of a diner/griddle style burger. It’s pressed, it’s got that great crust on the outside, and then the toppings will be unique. We’re in Austin, so we’re going to do a burger with a hot link on it, we’re gonna do a burger with queso. We wanted to make it unique to Austin. Also, it’s gonna be a little more affordable [than B Spot] because the burgers aren’t going to be as big. Like B Spot, it’ll be a burger that, when you bite into it, it’s gonna run down your hand a little bit. I’ve often heard your cuisine described as being very “meat-centric.” Has being from the midwest and loving meat shaped the way that you cook, or approach specifics with your restaurants?

Yea, we opened our first restaurant almost 18 years ago, and our first B Spot about 8 years ago. We’ve been fortunate enough to be named best burger in America for five years. [The restaurants] center around meat, but they also center around where that meat is sourced. Our biggest thing is, whether you’re going to Lola which is $85 a head, or you’re going to the burger joint which is $8 a a head, it’s food you can trust. We really want to take the same pride in a $6 hamburger as we do in a $42 dry-aged ribeye. The vehicle is different but the process is the same. Cheeseburger and fries available for under $10.

Is there a particular farm here in Austin you’re sourcing the meat for the burgers from?

We work with a farm out in the midwest because that’s who we’re most familiar with and they’ve always done our meat program. So, it’s beef that’s raised on grass and grain, no hormones, no antibiotics, raised sustainably and ethically, which is very, very important to us.

That’s something that’s very important to us here, too. Ethically sourced products are certainly cornerstone to the Austin culinary experience.

One of the things we are excited about for Austin… We’re across the street from UT, and doing [a burger with] Earl Campbell’s Hot Links. One, he’s one of my lifetime idols, and two, I love his product. I think it’s the best hot link in the business. So, the Earl Campbell’s hot link is gonna be on one of the burgers?

We’ll have a burger with a hot link, but we’ll also be offering three varieties of hot links, along with four varieties of burgers. The Hot Mess with coleslaw, fries, and Symon Sauce.

As far as non-meat, or options without red meat, will there be chicken or veggie options at Symons?

I’ll begrudgingly put a veggie patty on the menu. [Laughs] My wife and business partner is vegan — she’s always a vegetarian, most of the time a vegan — so I always have to take those things into account. So, you come to Austin quite a bit. What are some of your favorite places here?

I still love, even though it’s been there for awhile, Wink. It’s absolutely one of my favorite restaurants, I think Stewart does an incredible job there. I think it’s very consistent and rock solid all the time. Obviously I’m a barbecue junkie. What you guys do with BBQ… You could list 20 places and each one is as good as the next one. Thanks for your time today, Michael. We’re very excited to have you here in Austin and we can’t wait to try the food. Take your meal to the next level with a vanilla or chocolate milkshake!

After the interview, we got to try almost everything Symon’s has to offer and I can already tell that we’re going to be visiting regularly. The cornerstone of their menu is the “Hook ‘Em,” a cheeseburger equipped with an Earl Campbell’s hot link, queso, and a few french fries for good measure. This burger was something special. It sounds complicated, but it tasted simply awesome. I’ve had burgers similar to this one that felt like they were too much, but the Hook ‘Em was balanced perfectly between the spice of the hot link and the creamy queso. I also enjoyed the “Hot Mess,” and their old fashioned, straight-up cheeseburger was as solid as they come. Symon’s Burger Joint is located at 2415 Guadalupe St, on the drag in the new Space 24 Twenty next to Urban Outfitters.

Symon’s Burger Joint is now open, and they are having a grand opening party on Friday, December 4th, 2015.