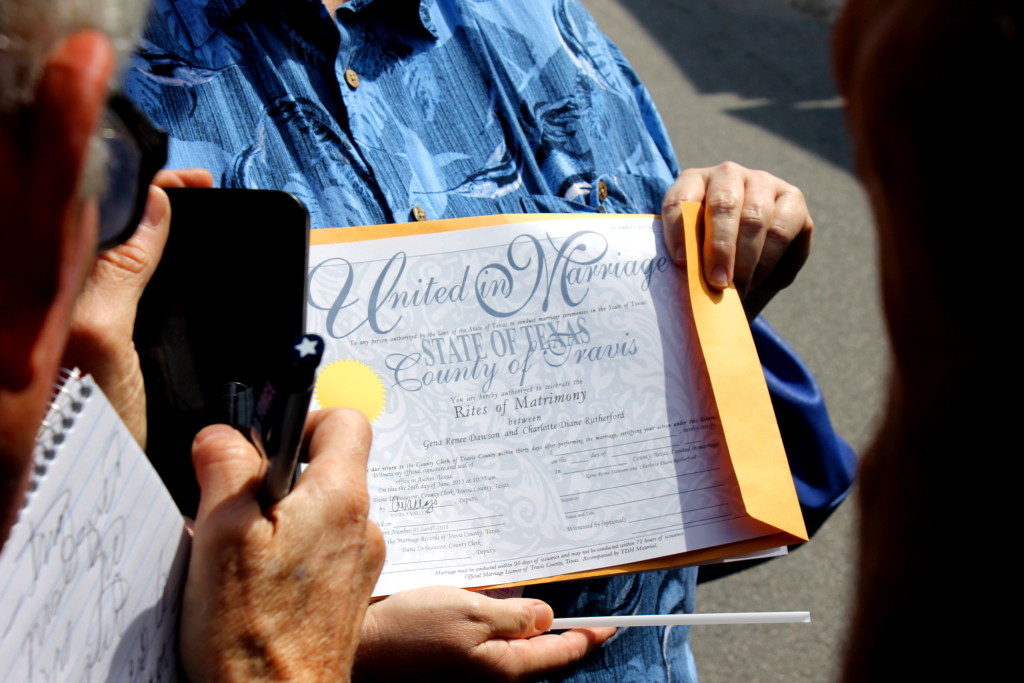 Hours after the Supreme Court of the United States ruled this morning that same sex couples have the right to marry, hundreds of people flocked to the Travis County Clerk’s office, which began issuing licenses at 10:30 a.m. on the dot. Two by two they emerged, dozens of cameras trained on them, smiling with marriage certificates in hand.

Although DeBeauvoir was not present in the room as the first couples walked in on Friday morning, she extended office hours until 6:30 p.m. and announced they would stay open through the Fourth of July weekend. “This is a joyous day, I am delighted for all couples who wish to be legally married in Texas,” DeBeauvoir said in a prepared statement.

Austin Mayor Steve Adler joined DeBeauvoir in celebrating the court’s ruling. “Love wins!” he exclaimed on Facebook. “We celebrate marriage for all as a fundamental right and liberty no longer denied.” Shortly thereafter, a rainbow flag was hung on Austin City Hall. A photo of the scene was tweeted by Austin District Three City Councilman Sabino Pio Renteria. “Congratulations to all who waited so long and fought so hard for equality,” he wrote.

According to Texas law, couples who obtained licenses Friday must wait three days before a minister may sign their certificate, or obtain a waiver from a county court to discard the waiting period. The first couple to leave the Travis County Clerk’s office with a marriage license on Friday — Gena Renee Dawson and Charlotte Diane Rutherford — said they were heading downtown to do exactly that.

Meanwhile, Austin Metropolitan Community Church told The Austin-American Statesman that it would begin conducting marriages “as soon as licenses are issued and required waiting periods are met (or waived),” starting with their first ceremony tonight at 6 p.m. The Statesman also has a post being updated throughout the day detailing all the celebrations across town.

Austin.com had a camera at the Travis County Clerk’s office, and you can see our images below. Please note, these are very high-resolution photos so they may take a few seconds to load. Photos by Stephen C. Webster.