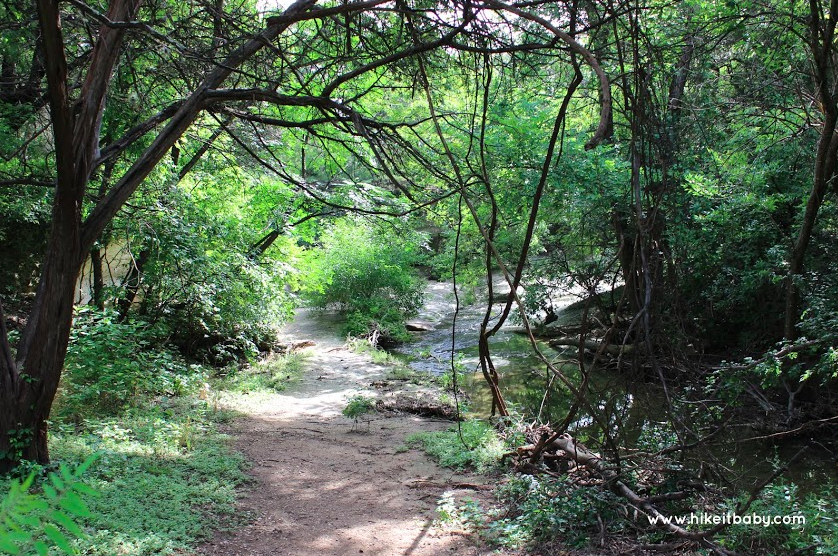 Months ago, when a giant cedar sculpture materialized in my neighborhood park, I was introduced to the City of Austin’s TEMPO temporary public art program. The idea of big, touchable art in public spaces–especially parks–was so appealing that I set a goal to visit all eleven exhibits. And then I promptly forgot.

Fast forward to last week when the city submitted (gasp!) the TEMPO Closing Celebration for posting to the Free Fun Calendar. Now I had a deadline. My resolve renewed, I set out Friday morning intent to see them all. But, alas, I never got past the first stop because my son and I whiled away our entire morning at the Little Stacy-Blunn Creek Greenbelt-Big Stacy super park. The city classifies these gems in the heart of the Travis Heights neighborhood as two distinct parks with a greenbelt in between, but they definitely have the feel of one linear park. 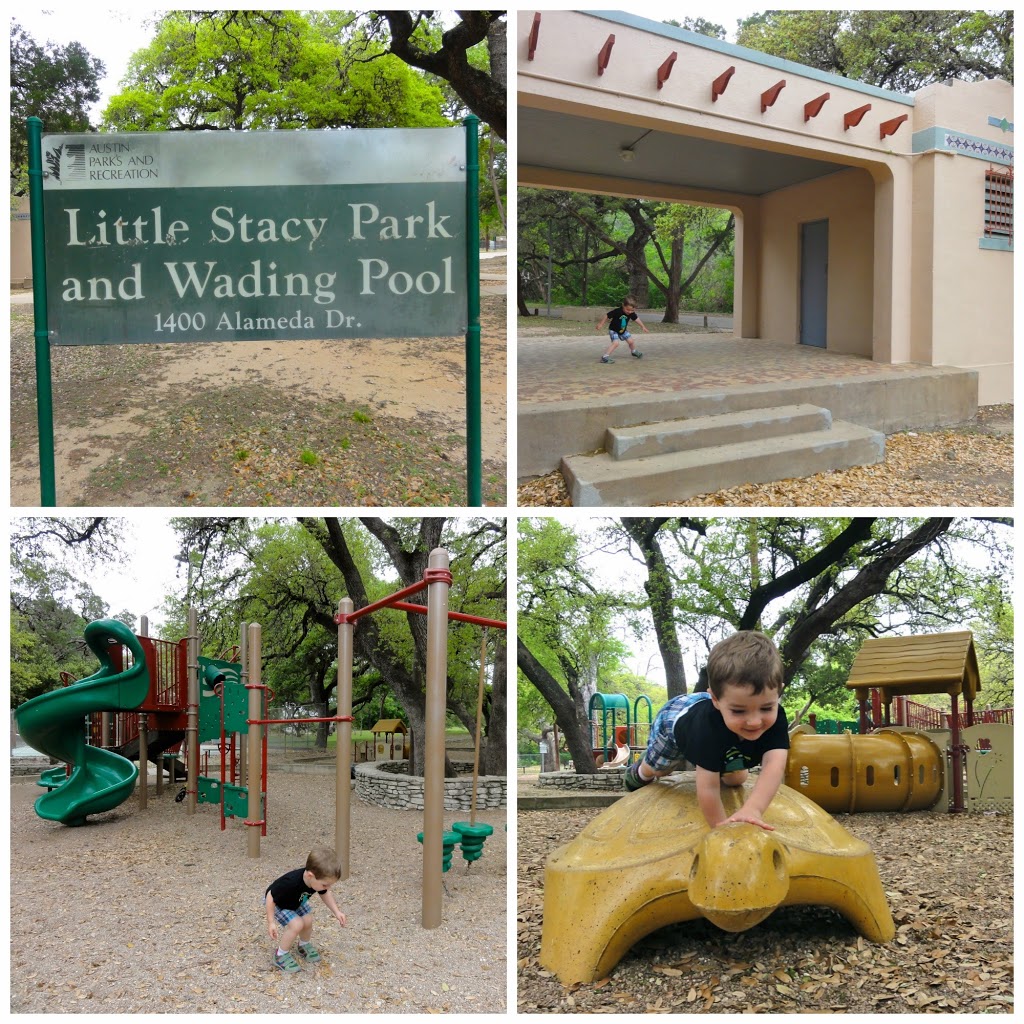 The tot and I started out at Little Stacy Park, where the trees immediately caught my attention. Majestic! Grand! Spectacular! Live oak trees bigger than any I’d ever seen in Austin. And shade–glorious shade–blanketing most of the park, including the large playground. There were a couple of nice playscapes; plentiful swings; a cute little playhouse; and, my little guy’s favorite, a huge yellow turtle for climbing and riding. Other features included tennis, volleyball, and basketball courts (with a kid-sized goal on one end); water fountains; a covered pavilion (which made a great stage for an impromptu toddler songfest); and restrooms (but bring your sanitizer because there’s no soap). Little Stacy is bordered on one side by an alley and on the remaining sides by a smallish one-way street, so it was very quiet and traffic was minimal. Mind you, we were there on a Friday morning in Spring. I expect it’s a lot less peaceful in summer when the wading pool is open. 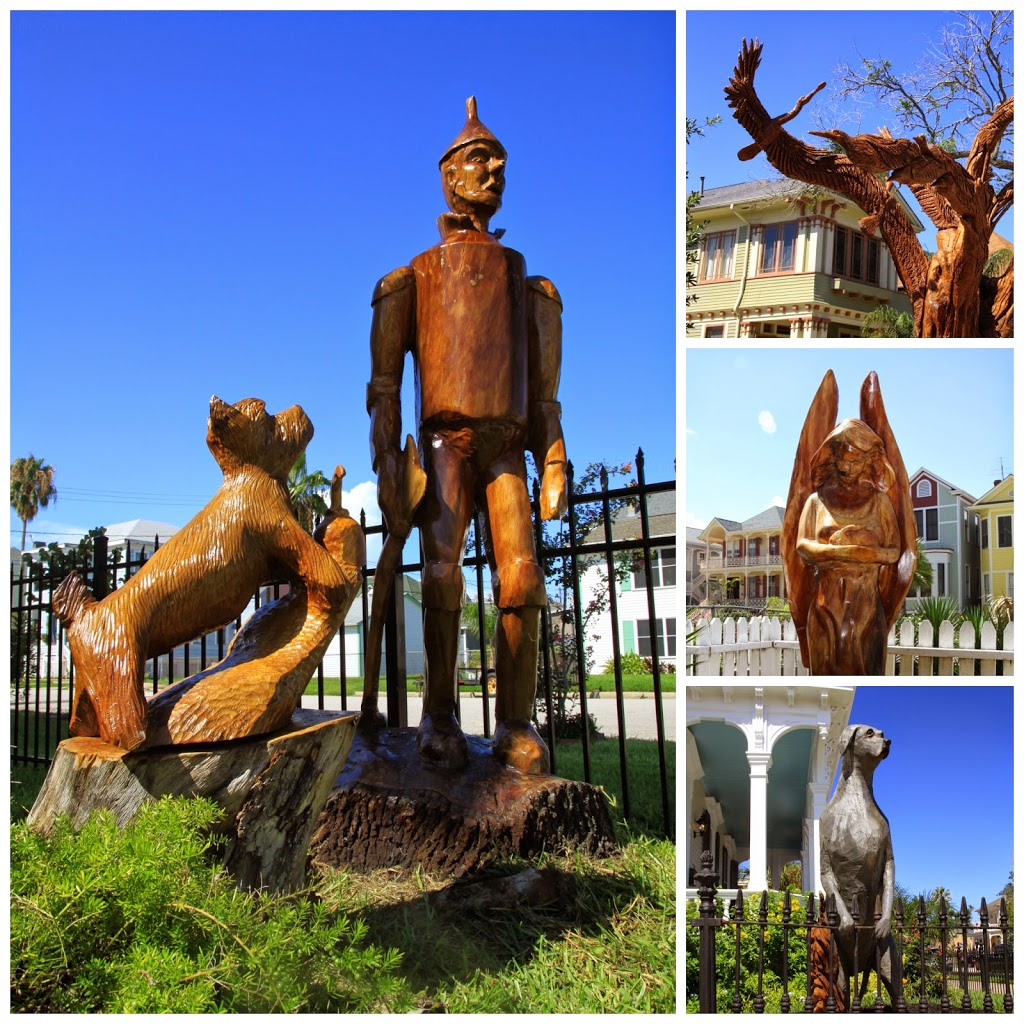 After walking two loops around Little Stacy, I was ready to give up on finding the TEMPO piece that was advertised to be there. Moms at the playground looked at me like I was nutty when I showed them a photo from the TEMPO website and asked where to find the sculpture. Suffice it to say, I don’t think TEMPO has been promoted as well as it could’ve been but the fact that the sculpture actually isn’t in Little Stacy Park probably doesn’t help. Eventually, a kindly dog-walker pointed us in the right direction, toward Big Stacy Park.

The walk from the farthest end of Little to Big Stacy is just under a mile. Other than a quick crossing of the creek on East Side Drive, the rest of the walk wiggled through the Blunn Creek Greenbelt on a part concrete, part crushed granite trail, meandering through the trees and skirting Blunn Creek. Where to begin describing the delights of the Greenbelt? I knew we were in for a treat just a few minutes into our hike when we came upon a tunnel going under Monroe Street. My fearless toddler sprinted ahead of me to test its acoustics, which were pretty terrific. 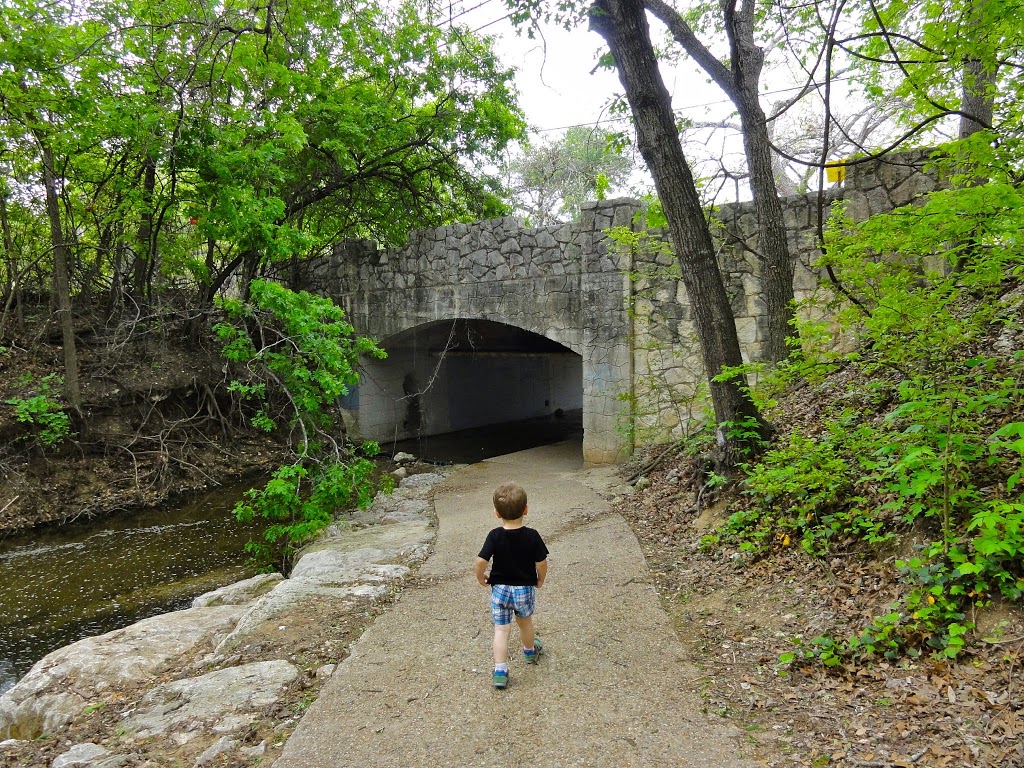 The area near the tunnel was one of the most easily accessible parts of the creek. It’s a great little spot to sit for a spell or to splash and throw rocks in the surprisingly clear and chilly water. (Blunn Creek is fed by six springs!) Climbing the hill on the far side of the tunnel, we finally found the first piece of Melissa Borrell’s “Glo-Wave,” a three-part sculpture (spaced out over a city block) that made for a few fantastic games of peek-a-boo. My little guy had a good time crawling on and through the art, though he sincerely believed it was built out of larger-than-life toilet paper. 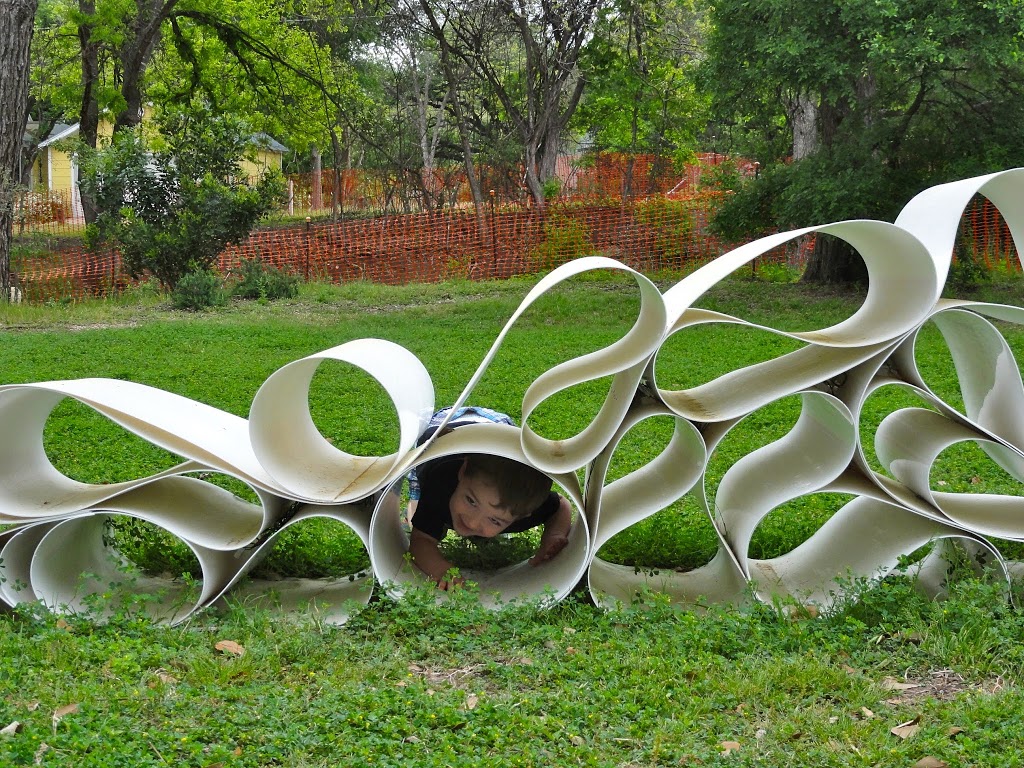 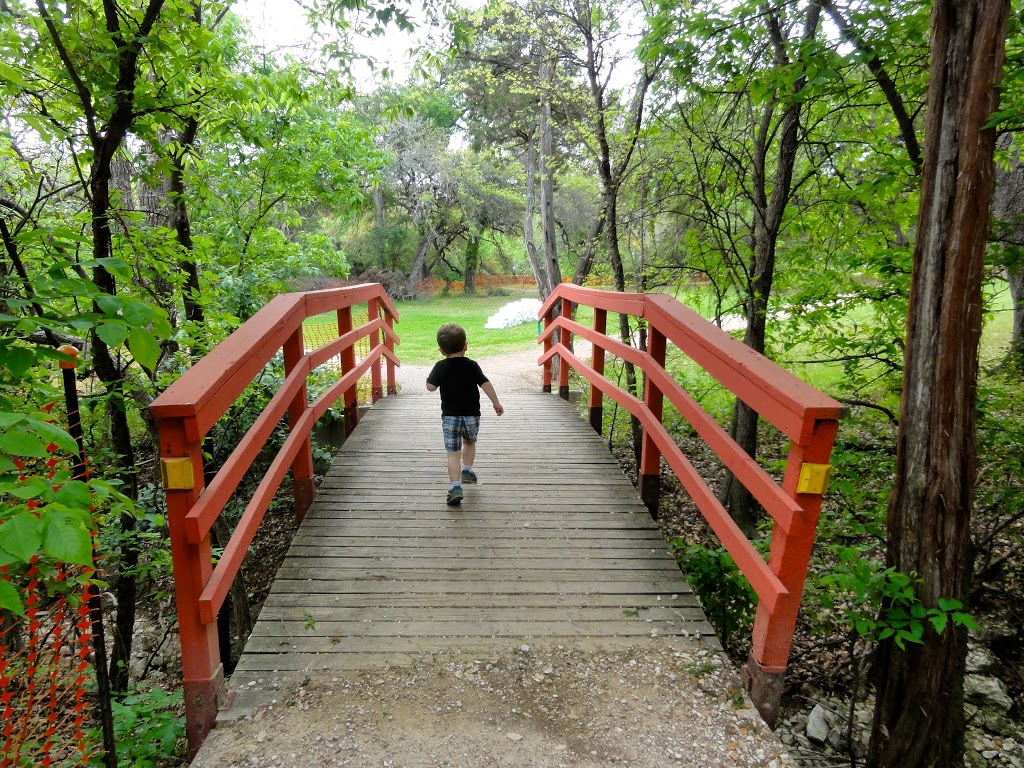 Not far past the tunnel was a cute little wooden bridge, perfect for noisy stomping, followed by the one street crossing (at Woodland Avenue) required to get from one park to the other. There is a crosswalk and speedbump but no stop sign, so do keep a close eye on the kiddos there. Which leads to my favorite thing about this whole linear park setup…the Greenbelt is bound on one side by East Side Drive (buffered most of the time by trees and a steep hill) and on the other side by the creek (mostly fenced off from the trail). It felt refreshingly safe to let my 3 year-old run ahead a bit and explore at his own pace because the narrow nature of the Greenbelt kept him confined. (Shhh…don’t tell him he wasn’t free.) Other high points of the Greenbelt: rustic, metal markers identifying the various types of trees; several wide open spaces ripe for running and kite flying; oodles of wildflowers; lots of very bold and brawny squirrels; and a moontower. I’m considering hosting a get-together here just so my invitations can say “Party at the Moontower!” 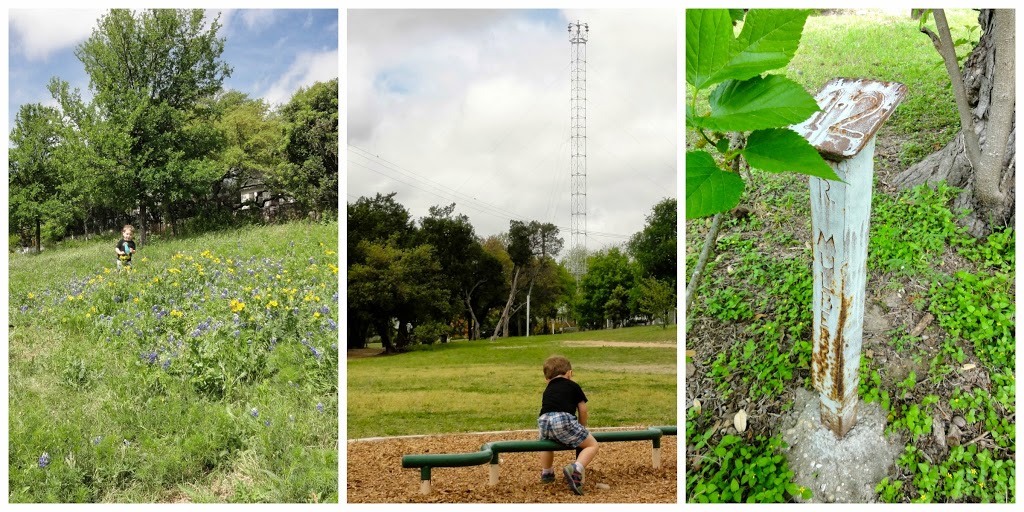 As the trail neared Big Stacy Park there was a cool, old bridge to cross the creek one last time. There were no railings there and the drop was sizeable, so this may be an exception to that run-free business I was gushing about, depending on the size of your little adventurers. Honestly, after all the fun we had along the way, our arrival at Big Stacy Park was pretty anticlimactic. The “big” is a misnomer since it’s quite a bit smaller than it’s counterpark (ha!). There’s a spring-fed swimming pool (free and open year-round) and a small, shadeless, fenced playground. There was a larger playground adjacent to the park but it was unclear whether it belonged to Big Stacy or to Travis Heights Elementary next door. Restrooms are located inside the pool area. Juan Deleon’s “Frozen Flow” sculpture, the TEMPO piece we had journeyed there to see, was actually the highlight of Big Stacy for us. My little man climbed all over, ran across, lounged on, and jumped off of its plywood ripples until I lured him away with the promise of lunch. 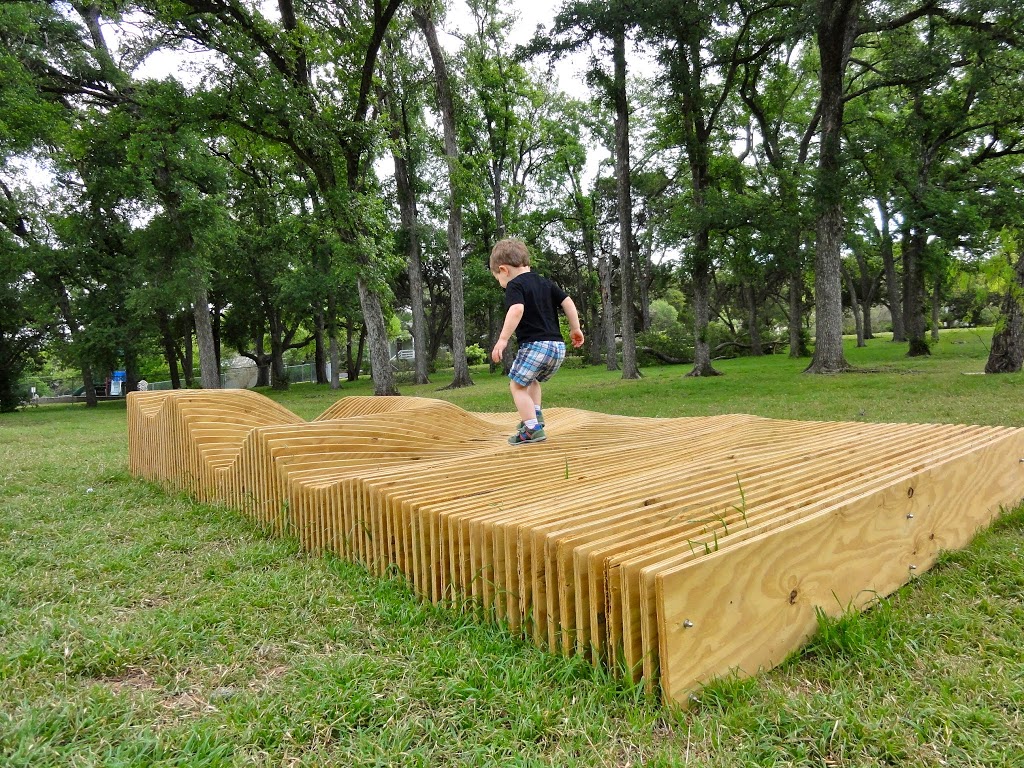 If you set out to experience the Little Stacy Park-Blunn Creek Greenbelt-Big Stacy Park trifecta, I recommend beginning your adventure at Little Stacy. There’s plenty of (mostly shaded) street parking and lots of fun to be had. When the wading pool opens for the season (see schedule here) I imagine a full day could easily be spent there just alternating between the pool and playground. If you have a jogging stroller, it’s worth your while to bring it along for the trek to Big Stacy and back. After all his romping, my kiddo had to piggyback it most of the way back to our car. It was a great workout if that’s your thing but a stroller might be less strenuous. There is street parking along East Side Dr, as well as a small lot at Big Stacy, if you’d rather start in a different spot. And if the public art intrigues you, get there soon. Both “Glo-Wave” and “Frozen Flow” are set to be de-installed in June.

Little Stacy Neighborhood Park
Tip: The park is not really on Alameda Drive. You’ll need to turn off of Alameda onto East Side Drive to get there.
1500 Alameda Dr
Austin, TX 78704