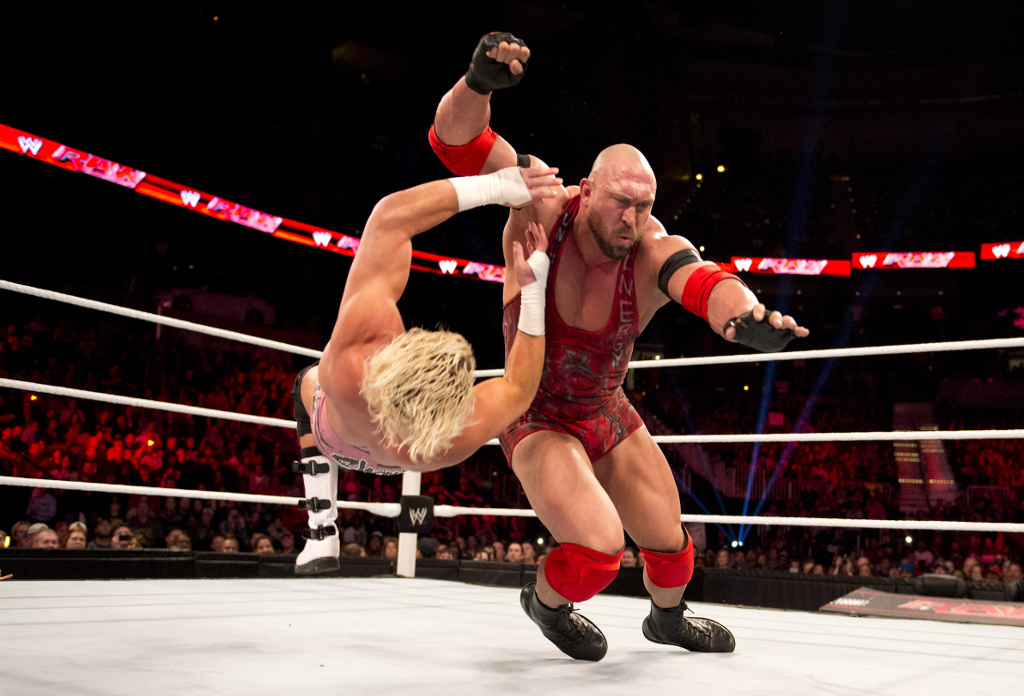 WWE Superstar Ryback is Sad: ‘We Don’t Really Have Time’ for Franklin BBQ

When World Wrestling Entertainment (WWE) returns to Austin on Monday, August 4, it will be for a live broadcast of their signature television program, “WWE Raw.” Taking place just weeks following their last pay-per-view event, “Battleground,” the event at the Frank Erwin Center will plant the seeds for the storylines that will play out on WWE programming over the coming months.

One of the Superstars who is expected to make an appearance in Austin is the wrestler known as “Ryback.” At 6’5″ and nearly 300 lbs., the man also known as Ryan Reeves paints an imposing picture. But today, he’s also sad. In an exclusive interview with Austin.com, Ryback admitted that he’s been longing to try a plate of Austin’s famous Franklin BBQ, “but with our schedule, we don’t really have the time to get anyone to wait in line,” he lamented.

Still, BBQ or none, this is a man living his dream. Even before he was the behemoth he is now, Ryback knew he wanted to be a part of the pro wrestling industry. “When I was 13, I won front row tickets to a WWE live event,” he said. “I got to go backstage and I even got to ring the bell for the main event. I knew that’s what I wanted to do from then on.”

Since then, Ryback has had the opportunity to travel all over the world with WWE, although he rarely gets to spend too much time in the cities he performs in. “I usually have a set routine,” he said, “I fly out of home [Las Vegas], get to the city, check in to the hotel, get a workout in if I can, get ready and do the show and then drive how many ever hours to the next city.”

He’s been on the road for nearly two years so far.

However, there is one constant, Ryback said, that he looks forward to no matter what town he’s in. “I always look for an Applebee’s,” he said, “They’re in every town, they’re always the same and I love their food. If I could eat there for the rest of my life I would.”

Of course, that does mean he hasn’t had a chance to try many of Austin’s culinary delights. However, this is a man known for chanting, “Feed me more!” So, he’ll probably feel right at home here in central Texas.

“[Powerlifting legend and WWE Superstar] Mark Henry lives [in Austin], and he’s always raving about different places to eat,” Ryback said. “Franklin Barbecue was one of those places I really want to try, but with our schedule, we don’t really have the time to get anyone to wait in line.” One Austin location Reeves did get the chance to visit were the training facilities at the University of Texas. He was able to get a workout in there with a number of fellow WWE Superstars during their last visit and had nothing but positive things to say. “John Cena and Cesaro and myself were invited to try out the facilities,” he said. “They couldn’t have been nicer. That whole athletic department is just a class organization.”

Ryback and his fellow performers will be at the Frank Erwin Center on Monday in a event that could be one of the last WWE shows held there. The current center is scheduled to be torn down and rebuilt elsewhere to make room for a new teaching hospital.

For many WWE fans in Austin, it’s the end of an era, similar to attending the last games at old Yankee Stadium.

“People who grow up wrestling fans always have memories of where they attended shows,” Ryback said. “The fans in Austin will always have their memories of the shows they attended there, just as other fans will be able to make new memories at the new building. To know that I may be a part of one of the last WWE shows there is a really cool honor.”

In the meantime, Ryback and his fellow WWE Superstars are focused on putting on the best show they can. Tickets start at $15, and they are still available through WWE.com or the Frank Erwin Center website. Members of the U.S. Military can visit the venue box office for complimentary tickets. The event begins at 6:30pm on August 4, and will also air live on the USA cable network.