For many years, Austin has been very focused on community and giving back to those who need it most. While the city has plenty of charity events going throughout the year, perhaps the most notable event is the ThunderCloud Subs Turkey Trot, which is held every Thanksgiving Day.

Taking place outside of The Long Center, the Turkey Trot holds a five-mile run, a one-mile walk, and a kids K. All proceeds raised goes directly to Caritas Austin, an organization who supports the working poor and homeless throughout the city. Since the Trot’s start in 1991, nearly $3 million has been raised.

While the idea behind the Trot has remained the same, the one aspect that changes from year to year is its logo. For its 26th year, the new logo is designed by Bastrop resident and artist Rebecca Vick, who says that she was on cloud nine when she received notice that her artwork had been chosen. Vick told ThunderCloud Subs a little bit of the process behind creating the new logo, saying “I made the turkey on a mixed medium canvas with lots and lots of layers,” Vick says of her winning design. 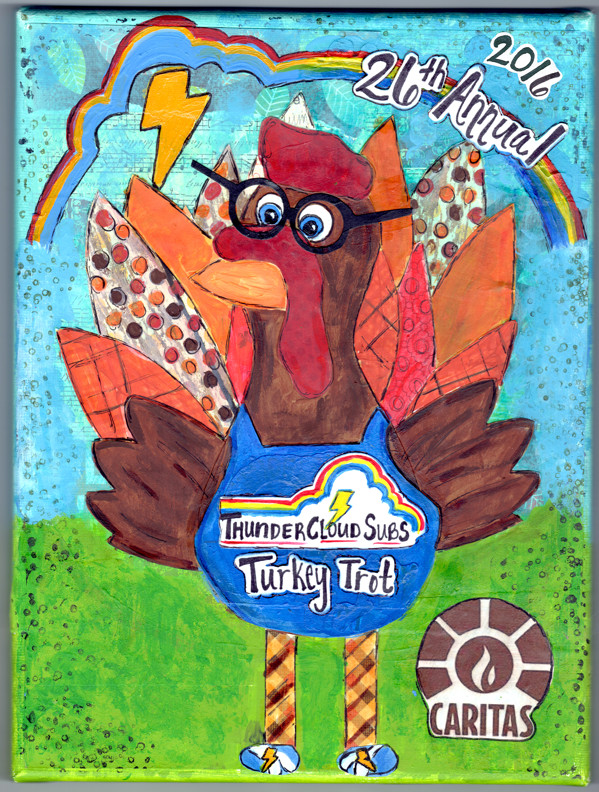 The blue and green background is a lined music sheet covered with watercolor paint, and topped with a stamp pattern. Some components were cut from different pieces of scrapbook paper, and others were hand-drawn using acrylic paint. “It’s really a mixture of a lot of different techniques, and I’m thrilled with the way it turned out,” she added.

If local artists are interested in drawing a logo for the 2017 Trot, the contest will launch in the fall and the winner will get an entire year’s worth of free sandwiches.