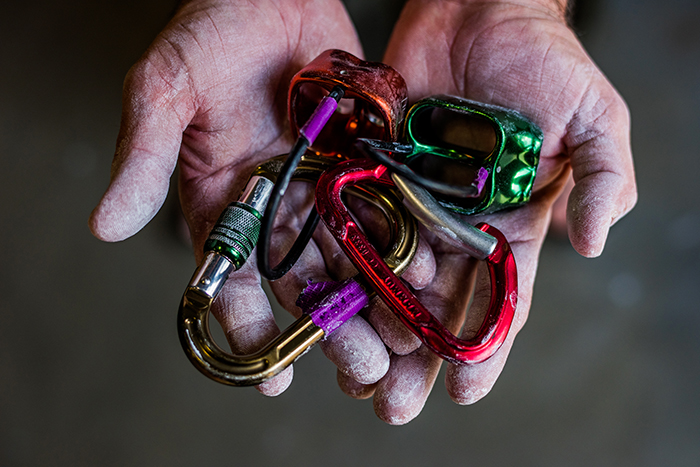 “Why would you waste your time climbing rocks? It’s expensive and dangerous.” Whether the question is posed by well-meaning grandparents or penny-pinching politicians, it’s something that every dedicated rock climber has to deal with at some point, and it’s a topic that we wanted to get some veteran insight into.

ARG has been around since 1998, but Wilson didn’t sign on with the company until he and his wife Erica relocated to Austin in 2003. Troy spent three years working for ARG as General Manager. Then, in 2006, he and Erica bought the company, fulfilling a dream they had held since they fell in love with climbing — and each other — while attending Texas Tech University.

“We would dream about opening a climbing gym one day,” said Troy, who first started climbing in the 1980’s at Hueco Tanks State Park. “One thing lead to another through my jobs in climbing, ropes courses, camps, another climbing gym, and then ARG. When the opportunity to acquire ARG presented itself, we went for it. It was a bit risky, but here we are 10 years later.” Presently, the Wilsons run two indoor climbing facilities: North Austin Rock Gym and South Austin Rock Gym, which are known by the local climbing community as the NARG and SARG, respectively. Both gyms maintain virtually the same hours and day pass and membership pricing, and provide guests and members from all experience levels with the opportunity to attend indoor and outdoor classes to improve their technical climbing skills.

The NARG predominantly offers bouldering — that is, low-height, ropeless rock climbing above a thickly-padded impact flooring system. The SARG accommodates bouldering as well, but it’s main draw is traditional top rope and lead climbing with the aid of belaying partners, harnesses, and other safety equipment.

Indoor rock climbing has exploded all across the U.S. in the past decade, and if its rampant popularity in Austin is any proof, it’s not going anywhere anytime soon. (Sorry not sorry, Christie.) ATX saw the opening of the largest indoor bouldering facility in the world last November and SoCo will reportedly get its first taste of the sport in the form of Crux Climbing Center this spring.

To stay relevant, Austin Rock Gym recently lowered their membership rates from $65 to $50 per month and greatly expanded their hours. Wilson also let slip that ARG’s goals for 2016 include upgrading their outdoor guiding service to include wilderness medicine courses, increasing the size of the NARG, and hopefully, opening a third gym. (Stay tuned on Facebook for updates on those fronts.)

Wilson told Austin.com that he feels nothing but grateful for the competition because it means that more people are discovering rock climbing for themselves — and becoming better people for it. Climbing can improve more than just a person’s balance, flexibility, and fitness, he explained. It can also develop your ability to strategize and solve problems, and build character and self-confidence as you overcome your fears and persevere to meet your goals.

“Climbing is physical, intellectual, and spiritual all at the same time,” he said. “Physically, you engage your entire body, toes to fingertips and everything in between, but you need a strong mind to get you through the scary parts. Mental training, exposure to critical thinking in stressful situations, and pushing your limits, fortifies the mind and can make or break your performance. Climbing will humble you… and it’s so dynamic and diverse that it never gets boring.”

The University of Texas has jumped on the rock climbing bandwagon too. Not only have they formed a rock climbing club for that’s open to the entire UT community, they also support a competitive team whose members compete in USA Collegiate Climbing Series competitions nationwide. The team often practices at ARG.

If you’re experiencing anxiety about getting on the wall for the first time or feel discouraged by your lack of improvement as a climber, then you might just find a home at ARG. As Wilson explains, rock climbing might not be a team sport in the traditional way of things, but it’s firmly rooted in a sense of community.

“Climbing can be a bit intimidating and scary,” he said. “Feeling afraid of the idea of risking injury or being embarrassed because you don’t feel competent in the environment is okay. We have all been there and we understand… all you need is desire and a willingness to grow. We will guide you through and help get you where you want to go.”

Beyond ARG, Wilson is a proud father. He and Erica have two kids, Cooper, 11, and Cade, 5, both of whom began climbing as toddlers, of course, and a 3 year-old blue heeler named Kiah. Wilson laughed when we asked if his dog climbs too, but it honestly wouldn’t surprise us one bit! Morgan Young, Austin Rock Gym’s head route setter, climbs a section of “The Big Pig,” a 30-foot bouldering wall at the NARG. Young has been rock climbing for 10 years.