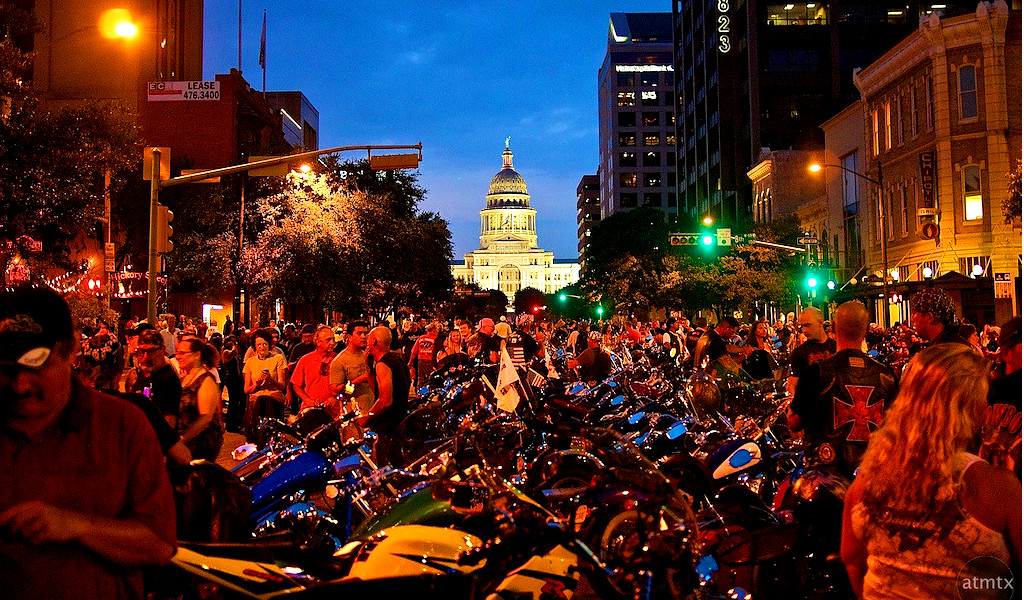 “We want people that come to ROT Rally this weekend the way they arrived: Upright, on a motorcycle, without any injuries, and without any loss of limb or life,” APD Chief Art Acevedo said during a press conference Wednesday, staged with the event’s organizers. Acevedo explained that downtown will be under high scrutiny this weekend, with numerous undercover officers patrolling the crowd and occupying rooftops, on the lookout for troublemakers.

The ROT Rally will also be taking place under another of Austin’s much-criticized “no refusal” weekends. That means police will be taking extra time to get warrants to draw blood from any suspected drunk drivers they catch on the roads.

“Out of the 40,000 people participating [in the ROT Rally], only a very small number might [pose a threat],” Acevedo added. “I really, I think, am not going to worry. I’m not really worried about the motorcycle gang members; I’m worried about the wannabes who show up to try and make a name for themselves.”

Nearly 180 bikers were arrested amid a shootout in Waco last month that left nine people dead and another 18 wounded. Prosecutors in McLennan County, however, have been slow to file charges and continue to hold a large number of their prisoners on what some have called “unusually high bonds.” Investigations into each prisoner’s actions are ongoing, but taking longer than usual. A selection of mugshots showing the 177 people arrested in Waco.

Because so many disparate groups were present during the Waco shootout, it’s difficult to say which of the arrestees actually participated in any lawbreaking. However, police say that gunfire erupted after a disagreement between two biker gangs that plan to be in Austin this weekend — the Bandidos and the Cossacks — although members of other groups were allegedly involved in the shootings.

Days after the eruption of violence in Waco, police departments throughout Texas were warned that members of the Bandidos and Cossacks from around the country had been instructed to arm themselves and head for Texas. Sure enough, roughly 1,000 bikers joined a mass demonstration in Waco on Sunday, with groups of them breaking off periodically to ride in circles around the jail to express their frustration.

Due to the Waco prosecutor’s decisions thus far — and despite the release of more than 50 of the arrestees — bikers from all over the country plan to carry their outrage in even greater numbers to the Texas capitol this year. Organizers have told police to expect record attendance, no doubt due in part to the political climate surrounding bikers in Texas right now.

“They just collectively labeled everybody [at the shootout] as a vicious gang member,” Matthew Clendennen, one of the arrestees in Waco, told The New York Times recently. “They arrested us because of what we were wearing and where we were at. Because I was wearing a certain color vest, automatically in their eyes I was guilty. So much for innocent until proven guilty.”

Waco police, on the other hand, claim to have confiscated over 300 weapons from the 177 arrestees. “(It) indicates to the public that these are not clubs, these are criminal gangs that came here with the intent or anticipation of violence,” Waco Police Sgt. Patrick Swanton told The Waco Tribune recently.

So, yeah… It’s going to be a little bit stranger than usual in Austin this weekend. Be safe out there, and do try to have some fun. Downtown may be loud during the annual ROT Rally, but it’s probably not that dangerous. (Fingers crossed.)

Watch APD’s press conference below, courtesy of the Austin-American Statesman.