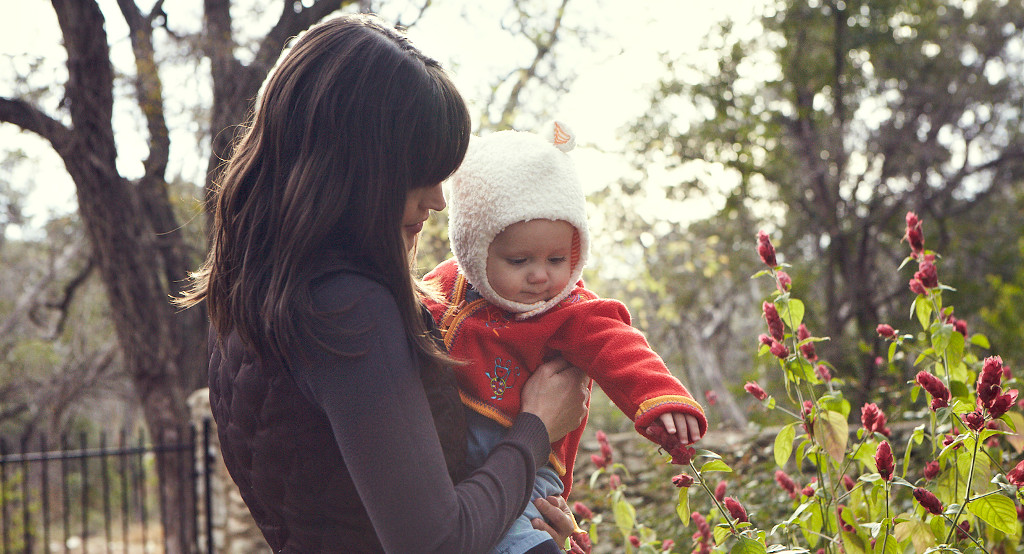 There’s a story behind this interview.

My subject, Mylinda Royer, an actress here in Austin who’s been in a number of commercials in recent years, is the mom to a 3-year-old boy. And just hours before the conversation you’ll read below, Mylinda found out that she is having a little girl.

We got together in a house where four children, ages 5 and under, were not only present, but playing in the next room. Granted, there was a babysitter – we weren’t that ambitious – but our conversation was inevitably interrupted a number of times with questions, hugs, and occasional guesses as to which child was doing all of that (happy) screaming.

The experience of and background to our interview ended up feeling like appropriate prep work for Mylinda’s next job as mother of two kids instead of just one. You are reading “Abby in Austin,” a blog about moms by Abby Roedel! Want to be featured here? Follow Abby on Twitter and say hi!

So, you received some big news today?

I was in the line at Chick-fil-A when I found out that we are having a baby girl this summer. We found out we were having our son in the line of an In-N-Out Burger in Los Angeles. I swear we eat better than that.

How has being a mom changed you?

One of the things that I love about parenting the most is this beautiful loss of self. The kind when you are wearing glasses, because you can’t find your contacts for three days in a row, or you forget to wear deodorant.  I’ve realized that I’m so much more comfortable in my skin and who I am when I’m in yoga pants in a park, possibly with vomit on my shirt. There’s this beautiful loss of self-consciousness.

And I understand fully now why sleep deprivation is a form of torture. It’s brutal. I think I’m tougher than I realized. I have a lot more respect for my mom – I’m the youngest of eight kids – and a lot more empathy and appreciation for her.

And I’m good at multitasking. Today, I comforted my toddler while prying a rogue corndog out of our Chihuahua’s mouth and Lou Reed’s “Perfect Day” played on in the background. Because, you know, that’s life right now. One day I will drink sangria in the park. Today is not that day. Unless, I take it in a sippy cup. And I am in no way above that.

How did you end up in Austin?

I moved back here from LA about three years ago.  It was a painful goodbye. My career was in a place where it was picking up and had momentum. We could have stayed and white knuckled it, but I became a mom and we were parents and wanted to be there with our child. If we moved to Austin, I could stay at home. We had the opportunity to escape the survival mode of LA. I know a lot of women who have successful acting careers with children, but I knew I had to take a step back from it.

Why did you choose to become an actress?

I don’t know if I really did. The real truth, my parents started divorcing when I was 18. I started modeling and realized that was a way to get out on my own. When I was in fourth grade, I told my class that I could see the future. I kept it up until I finally got in trouble at home.  Somehow, I managed to turn storytelling into a career with health benefits.

What do you appreciate about the career you’ve chosen, especially now that you’re a mom?

I’m not afraid of failure or rejection, because you deal with it a lot. You learn to take it for what it’s worth. I think there’s a lot of freedom that comes with that. And now, as a mom, when I’m on set, I have showered and brushed my teeth. I get to sit down and someone asks me if they can get me something. And they do my hair and makeup. Just to be taken care of   – it’s this amazing gift.

What are some of the best choices you made in your career?

I was chosen for the ABC Diversity Showcase in LA, and so many jobs and so much support came from it. It’s sometimes hard to have a door open for you in LA, but to have a whole network, it was a humbling, mind blowing gift. I was proud to be a part of that, but it was the friendships and relationships that came out of it that make me most proud. A lot of people go to LA and are ensconced in acting and lose themselves. Because of that experience with ABC and having it at the beginning of my adult career, I found myself in acting. It was the exact opposite, because of all the support.

Do you think balance is achievable?

I think there are myths that we buy into like marriage is 50/50. Sometimes, it’s 80/20 or something else. I’ve been married for nearly 14 years. Sometimes, there’s a balance, but I think we can put a lot of pressure on ourselves as moms chasing this elusive idea of balance. It’s overwhelming to have two kids under five or to be a first-time mom trying to nurse in the parking lot of Ikea -I did that. My first trip out with my son was to Whole Foods. I managed to accidently steal a birthday card and take $40 out of the ATM and leave it there. I don’t know if balance is totally real. Someone has achieved it, I’m sure. They probably have a great blog or I have their cookbook, but no one that I know personally.

Do you have any regrets as Mom?

I don’t know if I have any regrets. Regret implies something you didn’t try to change or fix or do better. I fail daily. I had to apologize to my son today. What I’ve learned from being a mom is that failure is the best opportunity to grow and hopefully for my son too. Mylinda and family, including their soon-to-be newest member.

How has your career changed since having your son?

I thought when I got pregnant that I had a ticking time bomb [regarding my career] for 9 months and life was going to change – but it didn’t. I’ve been doing primarily commercials and print work. I didn’t think that would happen after having a child – the idea of a career blossoming after having a child or even just being a viable option.

What advice would you give another woman who’s considering becoming an actress?

I would ask them “Why would you want to do it?” It’s kind of a painful profession.  If you are doing it for any validation or fulfillment in life, then I wouldn’t do it. If there’s anything else you can do, then do that instead. I think someone told me that once. If you plan on getting your worth and value from this thing, then get a puppy. They will love and kiss you.

What do you value?

I’m pretty big on kindness. It’s just easy to go through life and be disconnected. I had a day job at the Chateau Marmont in LA and you really learn on the other end of it how kindness impacts your day. How it changes you. That’s our big thing with our son.

I’m a big believer in community and doing life together. As a mom, I realize how much I need other women in my life. We love doing life with people who are dear to us and it has increased exponentially since we had kids. We have a deeper appreciation for our friends and family.

What are your hopes for yourself as a mom and for your children?

My hope for me is to be present. There are so many ways to be distracted right now. It’s so easy to be distracted by social media and all the stuff that needs to get done in a day. I don’t have any big goals. I’m a little overwhelmed and a little put off by the business of making childhood magical. Growing up in a free country – in a democracy- the life we have is pretty magical.

For my children, it’s the freedom to be who they are and not put expectations on them. Every night, when I tuck my son into bed, I pray that he will love God and love others. That he would be a defender of the weak and the marginalized. When I found out that I was having a girl today, I prayed that she would be strong and kind and brave.

What’s an interesting thing about you?

My mom’s side of the family is Cherokee.

What’s a funny thing your child has said recently?

The other night we told our son that I was pregnant and he said: “Can she come out now?” Followed immediately by, “I don’t like her name.” We then had some extra cuddle time and I thought we could sing one more song. I asked him if there was anything else he wanted me to sing. He whispered “Don’t Stop Believin.” So, we rocked out to a little Steve Perry before going to sleep.

What do you love about Austin?

It’s such a great city for families. I love the energy of the city. I think it’s a progressive city and a compassionate city. I think there are a lot of people who want a better world for their kids. People want positive change and are serious about pursuing ways to make that happen.

List some Austin favorites. Where do you go without your kids? I love Sugarcoat Nails – awesome pedicures and mimosas.

Favorite kid activity? We are in the water constantly here –Deep Eddy Pool or Westenfield Pool. We love Caffe Medici. That place got me through the first six months of my son’s life.

What’s your favorite kid friendly restaurant? Galaxy Café or Zocalo Café.  There are always kids there and the employees are so gracious.

If you’re a mom or you know of a mother who would like to be featured on this blog, please reach out to me on Twitter @AbbyRoedel.