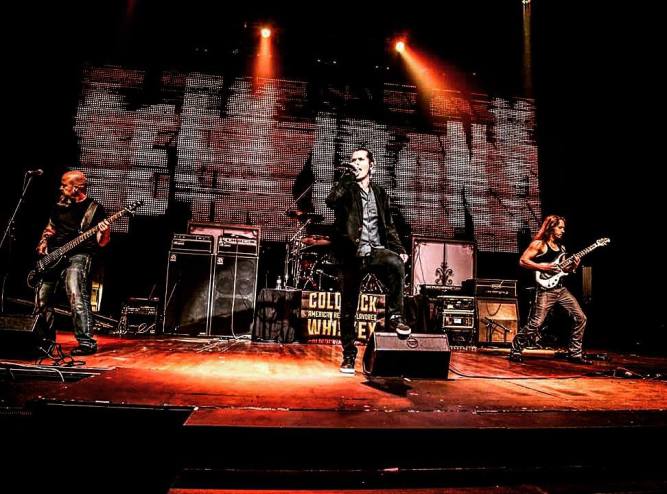 Electronic music is still on the rise here in Austin. We’ve been a launching pad for several large-ish acts (think Ghostland Observatory), but it’s not really our thing just yet. Even so, Israeli brothers Rom and Kfir Gov, who perform drums and vocals respectively, are killing it on the local scene with their EDM- and rock-influenced band Seek Irony. And now that they’re here, they’ve taken it up a notch by joining forces with Grammy-nominated guitarist Alex Campbell and bassist Adam Donovan to round out one of our town’s most entertaining acts.

While Seek Irony has found a new home for their music here in Austin, Texas, the brothers’ musical roots started in Europe, while eventually making their way to the Middle East and settling down in Israel. While Europe is where Kfir and Rom found their musical roots, once they made it to Israel the country’s little-known music scene became a large focus for the brothers. That’s where they were to establish their musical ambitions among a niche fanbase of EDM enthusiasts.

“A lot of people don’t know this, but Tel Aviv is actually the EDM music capital,” Rom told Austin.com during a recent interview. That’s why the sibling team was able to cultivate a strong foundation, allowing them to add more to their music than just EDM influencee. It helps that Seek Irony’s healthy dose of rock is also popular within the country.

The Gov brothers began their musical careers at an early age. “I was 12 years old when I got my first guitar and Rom was eight when he began pounding the drums,” Kfir said. “So living in Europe had a fairly huge influence on our musical upbringing. Mostly the hard rock side of it came from Europe. We grew up on American music like Ozzy, Metallica, Faith No More, Pantera, and Nirvana.”

It’s also clear that Rom and Kfir are hugely inspired by bands that originated in Israel, which they admit as well. Infected Mushroom and Borgore are among their favorites for putting Israel on the map as a starting point for EDM artists.

“A lot of big electronic artists like Infected Mushroom, Borgore, JViewz originated in Israel so growing up in that scene, we were very heavily influenced by that as well,” Kfir explained. “That mixture led us to love artists like Prodigy, Nine Inch Nails, and Pendulum — who all are a mixture of both rock and electronic in their own unique ways. Since I write the lyrics in the band, my experience of growing up there definitely has its influence on my lyrics, although most of my lyrics are not necessarily involved with the political aspect of living in Israel. Some are, but not most.” Seek Irony accepting Album of the Year at the North American Independent Rock Music Awards in 2016. Photo via Facebook.

While living in the Middle East was not a huge part of our discussion, the confines of the Israel’s relatively small size were the final push that Kfir and Rom needed when deciding whether or not they should move their musical project to North America, despite having a successful career in Israel. Knowing the potential for hardship and even failure, the siblings decided to take the leap anyway.

“We were doing well in Israel,” Kfir said. “Rom was a hired drummer for most of the Israeli music industry, and I was a successful music producer and I owned one of the leading recording studios in Israel. Seek Irony had a decent following too, but we felt we hit a ceiling with what we could do with our musical careers in Israel. Israel is a very small country, probably about the size of Houston. It is an island in the middle of all this crazy war raging [in the] Middle East. We have the Mediterranean sea on one side and a bunch of countries who “don’t really like” Israel on all its other borders. So we were pretty trapped. That reality didn’t allow us to just buy a van and go on tour to fulfill our dreams. But, we were among the lucky few who were really making a decent living as full time musicians in Israel, so it was a very risky move on our part.”

“As scary as it may be to restart your career from scratch in a new and unfamiliar place, we were more concerned with the idea that in five years from now we would be stuck in the same place with our professional careers,” Rom added. “So, we felt like we had to make a move… We knew it was an inevitable move for us sooner or later. We knew we would have to do it to get to the next step of both our personal musical careers and the band’s career.”

In America, Seek Irony has attracted a loyal following of both EDM and rock fans, while bringing in a wide range of ages among their fans. Everyone from young kids to families seem to appreciate these guys, and in Israel their songs tend to attract teens and young adults. They even won Album of the Year at the North American Independent Rock Music Awards.

When you see Seek Irony live for the first time, what immediately sticks out is their performance style and stage visuals. There’s so much going on during a Seek Irony show that it may feel like your eyes are constantly moving throughout the entire set. “A live show should hit all your senses, not just your ears,” Kfir said. “People come to see a show. If they only wanted to listen, they would listen to the music at home. We put an emphasis on bringing a big performance because we understand that we are not solely musicians, we are performers, and we want our fans to experience something unique and special when they come to our shows.”

Ultimately, “Our main goal is to inspire people,” Kfir added. “We want them to feel inspired and empowered, musically and in general. If we’re able to touch someone’s soul, just like our musical idols did for us when we were kids, that’s the most we can ask for.”

As for what’s next in the cards for Seek Irony, Kfir mentioned that they are just a short while away from signing an international record deal. If everything goes as planned, they will be releasing their album Tech N Roll worldwide.

If you are interested in catching the band live, you can check them out during SXSW where they will be performing at Texas Rock Fest on March 17, starting at 1:40 p.m.

Watch a track from Seek Irony called “Devil In Me,” below.

To read more of Lauren Gribble’s features you can head to her website Listen Here Reviews.