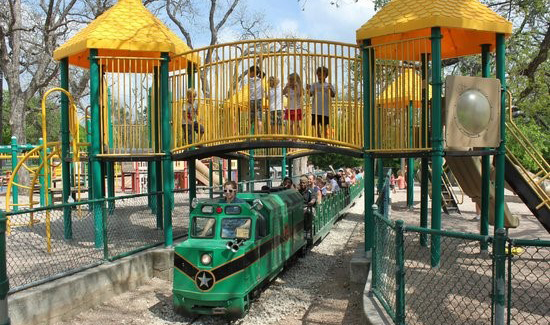 All Aboard! Zilker Park New Train On Track To Open in Fall 2021

The completion of Zilker Parks new train is under way after a two-year hiatus. The train was originally set to open in August 2020 but has now been extended to August 2021. A train in Zilker Park has been a vital part of Austin’s past and this train will surely become part of Austin’s future as all of the new train’s proceeds will benefit the park.

Now, we finally know the name of the new train! Meet the Zilker Eagle!

Last fall, Austin Parks Foundation invited Austinites to participate in the naming of the future train. Over 750 name submissions were received and then a committee of APF staff, board of directors, community members, and children helped narrow the options down to seven finalists. The Zilker Eagle was ultimately chosen by the community.

Previously known as the Zilker Zephyr, the beloved train went out of commission in 2019. The new model more resembles a passenger train and will be electric powered. APF is heading some of the updates for the new train, including making sure that it will be accessible to everyone in accordance with the Americans with Disabilities Act.

This will be the third train to grace Zilker since 1961. The original train was called Zilker Eagle, followed by the Zilker Zephyr.

While it will be hard to top a name like Zilker Zephyr, 750 names ideas were submitted by people all around Austin. The winning name will be revealed just in time for the train’s 60th anniversary on April 23 so stay turned!

Looking for more trains in Austin? Try this post: