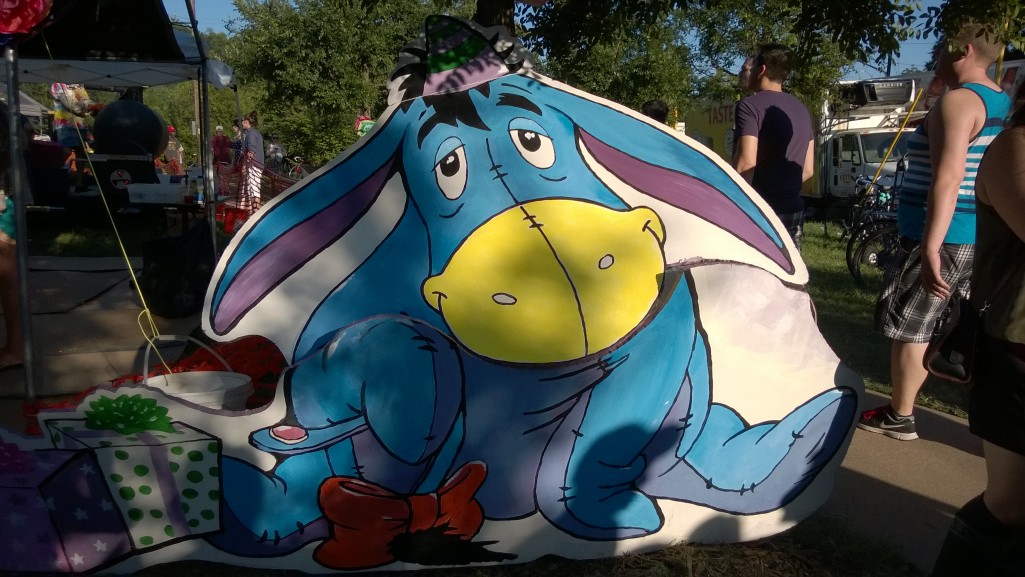 Eeyore’s 52nd Birthday Party was held in Pease Park on Saturday, April 25, 2015, and like any other hot and sunny spring day, Austinites of all stripes were out keepin’ it weird the best ways they know how.

Eeyore’s Birthday Party, a yearly gathering of Austin’s weirdest residents, is hands down one of the city’s best traditions. Everyone is welcome and it’s almost impossible to have a bad time (unless you’re a prude). If you’re into the weirdness, Eeyore’s is truly a magical event, and something that makes Austin, well, Austin.

Anyone who has been to Eeyore’s probably has a good idea of what went down, but for those who are unfamiliar (or just can’t remember), here’s 10 things Austinites did this year to keep things weird.

We Come Up With Some Seriously Crazy Costumes This guy really got in the spirit.

Costumes were encouraged, and imaginations ran wild. But if you weren’t in costume, nobody was judging. Rumor has it these are the next big thing in fashion.

Naturally, We Use Alternative Forms Of Transportation The bike racks were full, so folks left them where they could.

Everybody knew traffic was gonna suck, so why drive? I swear, Officer, I have a license!

Once We Get There, The Park Is Quickly Decorated Just in case, you know *who* shows up.

Camping out all day requires a personal touch. It was important to tune in to the right frequency.

Then We Settle In To Catch A Buzz Regardless of the poison, folks at Eeyore’s this year remembered that it’s a communal love fest. Thankfully, everyone was on their best behavior. There was a lot of fragrant smoke floating around the park, but other organic substances (*ahem*) were also consumed quite openly.

With Everyone Feelin’ Happy, We Get Down To Making Art If they didn’t have a canvas, they just painted on somebody.

At Eeyore’s, creativity rules and everybody unleashes their talents. A hula hoop, coloring book, AND guitar? These folks covered all the bases.

Oh, We Also Make Music. A LOT Of Music.

Along with the occasional communal “WHO0000OP,” the park was full of beautiful music all day long. Yes, the drums count as music. Accordion sounds are music too, y’know.

Then We Get Serious About Playing Around Some folks did what comes naturally. And others blew off any expectations.

But Eventually, We Just Want To Do Some Hanging Out The numerous hammocks could accommodate groups… …or just one lucky dude.

Of Course, We Take LOTS Of Photos Eeyore’s has always been a photographer’s dream. Yes, that is in fact a sunflower bra.

But Eventually, The Time Comes To Take A Nap Some folks were smart and came prepared for their nap.

After such a big day, wouldn’t you? Others just caught their tinky-winkys wherever they could.

And When It’s Finally Over, We All Agree To Do It Again Next Year All photos by Arcie Cola.