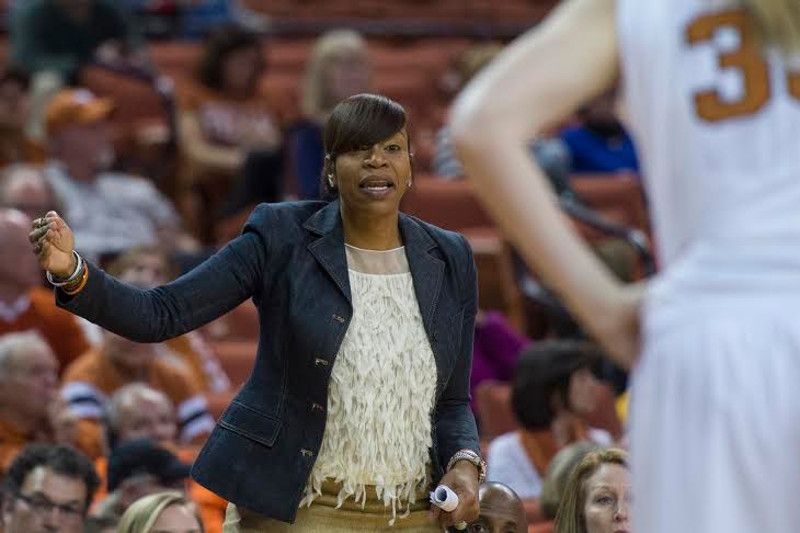 The Texas Women’s Basketball team is off to a flying start this year.

At 22-1, they’re tied for first place in the Big 12, and have already eclipsed their win total from 2014-2015 with over a month left in the season. Under Head Coach Karen Aston, the team has seen their win total rise each year since she took over in 2012. This year, the team is poised to advance the farthest they’ve gone in the NCAA since their Final Four appearance in 2003.

Needless to say, this year has been quite an introduction to coaching for the newest member of their staff: WNBA Hall-of-Fame occupant Tina Thompson. “I’m still adjusting,” she said with a laugh during a recent interview with Austin.com.

Fresh off of a great college career at the University of Southern California, Thompson became the first player picked straight out of college for the WNBA in 1997. She went on to win four titles as a key member of the now defunct Houston Comets, and became an eight-time All-WNBA honoree and nine-time WNBA All-Star. She’s even played overseas in Italy, Russia, and South Korea.

After 11 seasons with the Comets (the team folded in 2008), Thompson spent time with the Los Angeles Sparks and Seattle Storm before retiring in 2013 as the league’s all-time leading scorer.

And after that? “I didn’t do anything” for about two years, Thompson said. “I wanted to give my full focus to my son Dyllan, who had been so patient with me during my career.” And she especially had “no interest in coaching.”

Thankfully, UT women’s basketball head coach Karen Aston had other ideas. She tracked down the number for Thompson’s home in Houston and called her up one day to ask if she would consider joining her staff in Austin.

Thompson initially declined, but ultimately agreed last May to return to the sport she loves and take the job in Austin. “Coming to [the University of Texas at Austin], seeing the university and having an understanding of what it stood for,” is what really sealed the deal, she explained. Thompson also emphasized that her decision was made in part based upon the “huge” amount of respect she has for Aston, who has been coaching basketball since 1994.

After nearly a year on the job, Thompson is still learning. In terms of non-basketball duties, the immense amount of paperwork was one aspect of coaching she didn’t foresee. Communication is also something she’s constantly working on. Before coming to the Longhorns, Tina Thompson was a Four-Time WNBA Champion with the Houston Comets (Photo via Flickr Creative Commons.)

“There’s lots of persuasion that needs to happen [among the players],” Thompson explained. “You have to create that relationship and set a level of expectation with your players.”

It helps, a lot, that Thompson has the mind of a player. In fact, some of the current Longhorn women grew up watching Thompson win during her WNBA career, going down as one of the league’s top 15 players ever. So, the inspiration factor helps, but Thompson is sure that not all of her players want a career in pro sports. The team, she explained, “has a lot of brainiacs in the classroom,” too.

For now, Thompson is keeping focused squarely on this year’s players, who have surpassed all of her first-year coaching expectations. As for the future, a promotion to head coach is definitely not in her plans, which still mostly revolve around her son.

It may be late in the season, but it’s not too late to see the Longhorn women in action before they gear up for Big 12 tournament play and an expected NCAA Tournament bid. For Austin sports fans, this is one team that should not be missed.