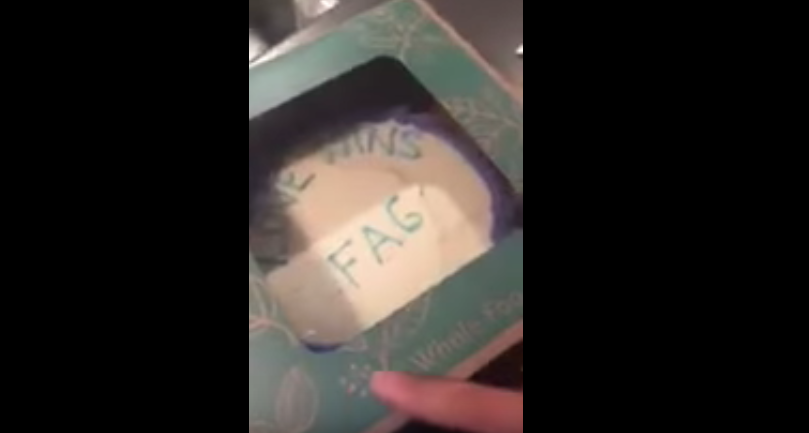 Did Whole Foods Downtown Write This F Word On A Cake?!?!

A Whole Foods customer, Pastor Jordan Brown, claims that the flagship store on North Lamar edited his cake order to include a slur against the LGBT community. His original order was for a pride-filled cake that said “Love Wins,” but that’s not what he received, according to a lawsuit that he filed.

The incident occurred on the afternoon of April 14, and Whole Foods issued a statement saying that:

The team member wrote ‘Love Wins’ at the top of the cake as requested by the guest and that’s exactly how the cake was packaged and sold at the store. Our team members do not accept or design bakery orders that include language or images that are offensive. Whole Foods Market has a zero tolerance policy for discrimination.

This incident is even more shocking considering that last year Whole Foods ranked highly on the Human Rights Campaign Foundation’s annual LGBT equality index, scoring an 85 out of 100 for their employee policies.

Kaplan Law Firm, which is representing Pastor Brown, staged a press conference regarding the incident this afternoon. Speaking to an assembled group of reporters, Attorney Austin Kaplan — who, interestingly enough, recently won “Austinite of the Year” at the Austin Under 40 Awards — explained his client’s perspective…

Pastor Brown never asked for this to happen. He continues to be overwhelmed by the feelings of pain, anguish, and humiliation because of this incident. He frequently shopped at Whole Foods, which makes this all the more shocking and disappointing.  What really concerns him is knowing that unless some action is taken, this kind of thing could happen again, and that someone else might have to go through a similarly excruciating experience.”

We will keep you updated as the story develops.