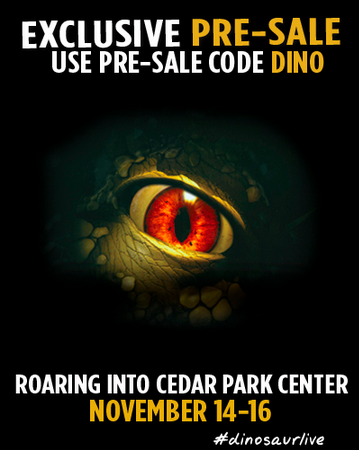 Walking With Dinosaurs The Arena Spectacular is roaring into Cedar Park Center November 14 – 16, 2014.  Tickets go on sale to the general public, Saturday, May 10, 2014 at 10 a.m., but Free Fun in Austin readers can get an exclusive pre-sale discount!

Walking With Dinosaurs The Arena Spectacular, based on the award-winning BBC Television Series, will bring the new tour to Cedar Park Center in November for six performances only. This updated production will showcase changes to the dinosaurs based on the latest scientific research including the likely feathering of some species!
To purchase discounted pre-sale tickets for opening night of Walking With Dinosaurs The Arena Spectacular, follow this link and enter promo code DINO in the “Offer Code” box.  This will allow you to purchase your tickets for the event on Friday, November 14, 2014, before they go on sale to the general public, at a pre-sale savings of up to 33% on all price levels!
All tickets subject to additional fees. This offer is valid until Friday, May 9, 2014 at 9:59 p.m. Tickets will go on sale to the general public Saturday, May 10, 2014 at 10:00 a.m.

For more information on the show, watch the video preview or visit the Cedar Park Center website.