The University of Texas at Austin’s Energy Institute published a study on Thursday (PDF link) that pinpoints the true costs of electricity generation in the United States, finding that wind is the most cost-effective generation method across much of the midwest and rust belt. Natural gas and nuclear energy are the most affordable elsewhere.

In an advisory, the researchers published a map showing the most cost-effective electric generation methods by county. It shows what many environmentalists will receive as good news: Renewables reaching grid parity across the country, with wind leading the way, especially when so-called “externalities” are incorporated into the cost calculations for sources of energy that create enormous pollution and widespread negative health and environmental effects.

Externalities are defined by the study as “direct and indirect costs associated with both traditional and emergent power generation and delivery systems, including fuel, environmental and public health effects, infrastructure investments, integration of distributed energy resources and storage, and the interplay of energy efficiency and demand response with new generation.” 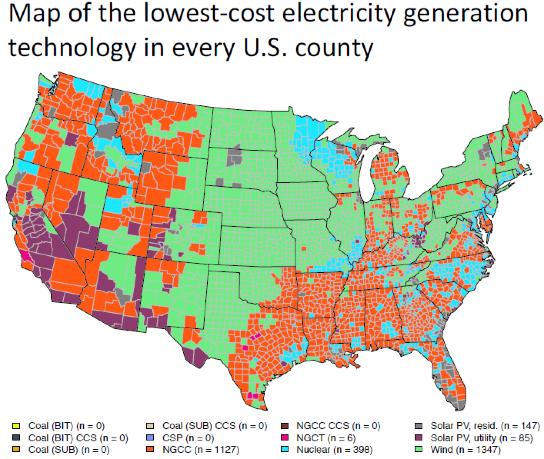 Even when externalities are not accounted for, renewable energy generated primarily by wind is most cost-effective for certain cities where infrastructure access has been fully built out. Georgetown, Texas is one such city, where a Republican mayor who moonlights as a certified public accountant opted for 100% renewable energy as a means of establishing cost stability over the long term.

“[I]n our case this was a very practical decision first and foremost, and we’re glad for the unbelievable societal benefits [of renewable energy], but this was a business decision,” Georgetown Mayor Dale Ross told Austin.com last June.

Researchers also built a calculator tool for policymakers to experiment plugging in their own numbers and seeing the interactions between electric production, consumption, and the infrastructure needed for delivery. The calculator, they explained, was created because of the debate in the business world over what costs should be factored under externalities.

“We think our methodology is sound and hope it enhances constructive dialogue,” Dr. Joshua Rhodes said in an advisory. “But we also know that cost factors change over time, and people disagree about whether to include some of them. We wanted to provide an opportunity for people to change these inputs, and the tools we’ve created allow for that.”

“These results, namely that wind and natural gas combined cycle are the most typical low-cost solution, are consistent with recent market trends,” researchers added in the study’s abstract. “These results and display format could serve as an educational tool for stakeholders and policymakers when considering which technologies might or might not be a good fit for a given locality subject to system integration considerations.”