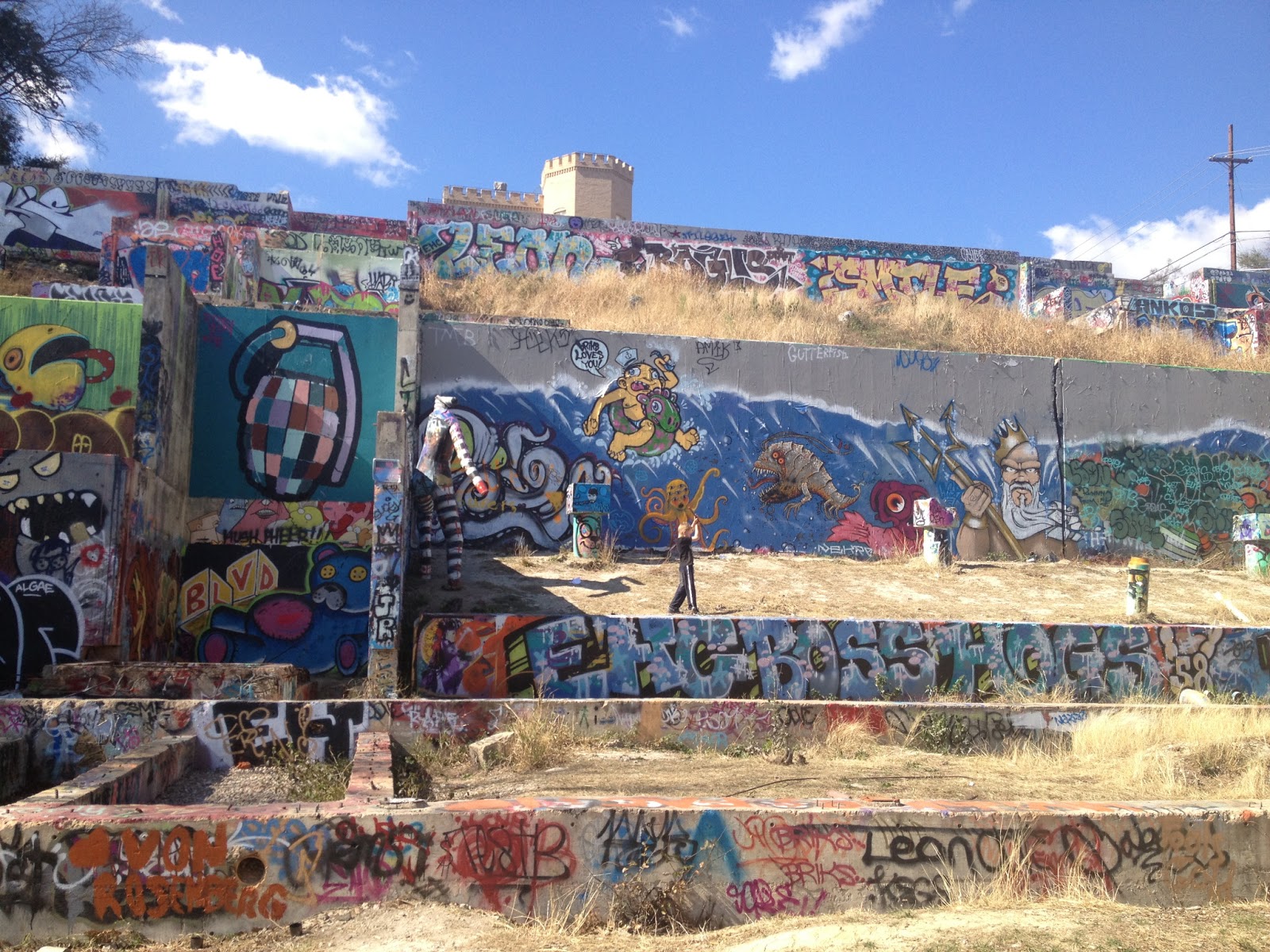 Up Close & Personal with Art at HOPE Gallery

The HOPE Gallery, circa February 2013

A few years ago, I watched an interesting film called Exit Through the Gift Shop, which was a window into the life of street artists. One of the graffiti artists featured in the film is Shepard Fairey, who created the iconic HOPE portrait which became a calling card of President Obama’s first run for the Presidency, as well as the OBEY Giant, which appeared around Austin around South by Southwest in recent years.

After watching the movie, I started to see street art all around Austin. Then, I heard about the Baylor Street graffiti park, also known at the HOPE Outdoor Gallery (which, incidentally, Fairey helped launch in 2011). Once an abandoned condo project, the property, close to downtown and topped by a house which closely resembles a castle, is a place graffiti artists have a canvas upon which to create. The area is now a living art exhibit, meaning you will see something different each time you visit. I thought it would be an interesting place to take my six-year-old son.

Unlike a museum, where we have to use “inside voices” and where I am still on edge a little about my son getting too close to a piece of art, here was a place we could explore — for free — and actually see art being made. 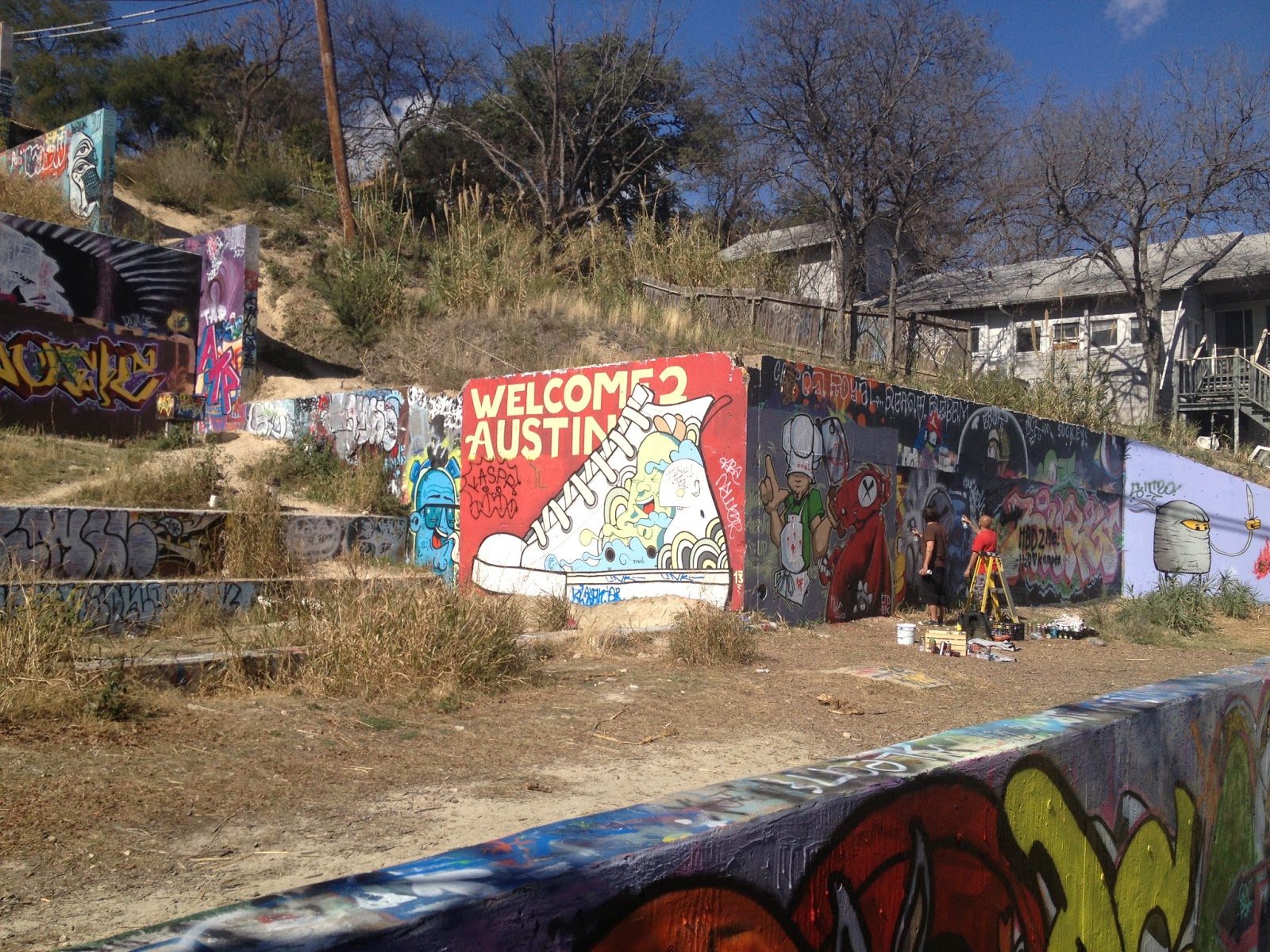 A few weeks after learning about the graffiti “park”, we were out with a friend of my son’s and a mom on a school holiday and we decided to drive by. My son’s friend had been to the Gallery on a field trip, and my friend mentioned that the parents had been warned that there were “bad” words that were a part of the art. When we drove by, there were some guys who were drinking and smoking and who had bedrolls out, and we didn’t really feel comfortable visiting, so we decided to skip it that day.

On a different day, we had some time to kill after lunch and before a showing at the Bullock IMAX theater, so we stopped by again. The guys who were there last time we visited weren’t around, so we took about a half an hour to explore the area. A photo shoot was in progress and an artist was at work and there were probably a dozen or so others doing the same thing we were doing: looking at all the different images, talking about what we liked and getting a closer look at the “upper levels” of the gallery which extended up the hillside.

This is when I reminded myself that the graffiti park is basically a construction site — had I not had proper footwear, I wouldn’t have been able to head up, and in fact, my parents who were with us opted to watch our ascent from down below. There are also no trash cans, restrooms or any other kind of infrastructure, so unfortunately you might come across beer bottles, broken glass and the like. There were a few times my son’s climbing made me nervous (there are no railings or anything to stop anyone from falling from the concrete beams down below), so I’d definitely recommend waiting until your kids are school-aged unless you are willing to keep a close eye on them. We didn’t see any art with “bad” words, although it occurred to me that if the art is changing all the time, you never know quite what you will see (which could be both a good thing and a bad thing). Finally, I should mention that Baylor is a short, narrow street, so parking can be scarce. If you don’t have any luck in front of the the Gallery, you can try crossing 12th to the north on Baylor, or even Parkway heading towards Pease Park. 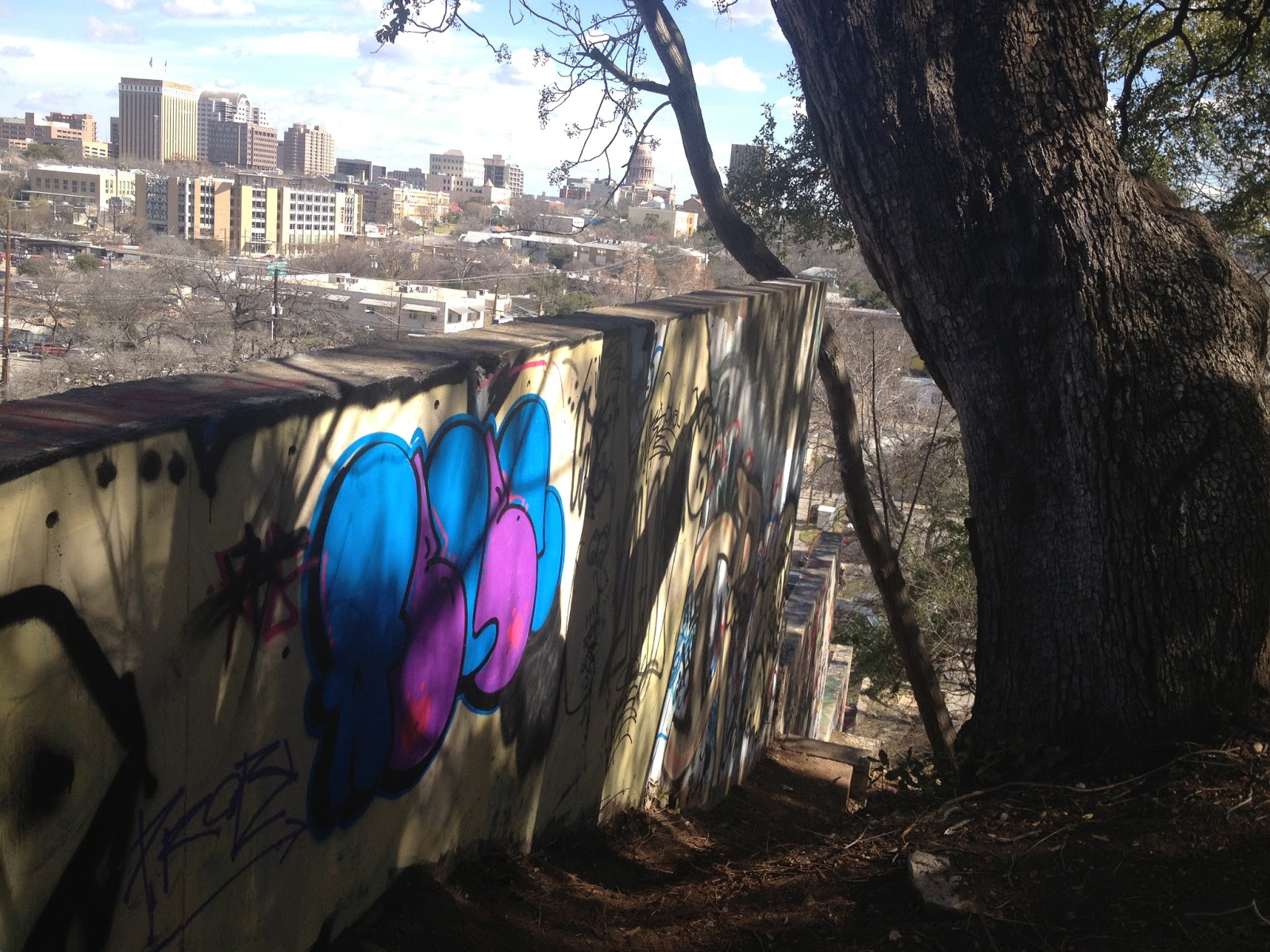 The views of downtown from the top of the Gallery are pretty amazing, but the trail going down wasn’t too easy to navigate.

We returned to the Gallery during South by Southwest for the ReCREATE: ATX event, during which the walls were painted gray, 50 artists were invited to adorn the walls with new art, DJs spun from a top level and in exchange for your drivers’ license, you could get a headset and listen to a few channels of music, which my son really enjoyed. For that event, barriers were erected so you couldn’t climb up unless you were an artist, but it was still very cool to see all the artists beginning to cover the walls once again. 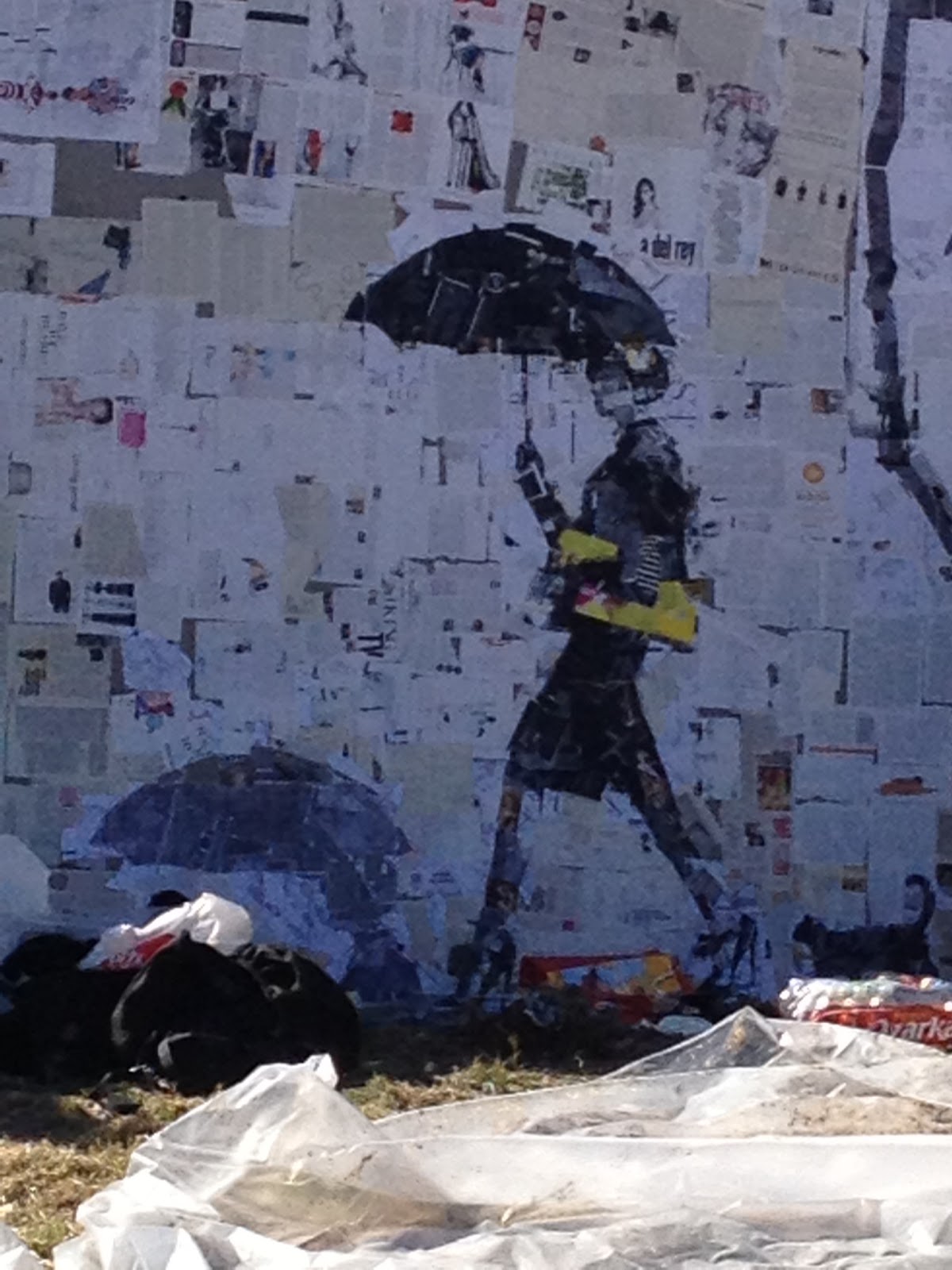 My favorite piece from our last visit during SXSW 2013. 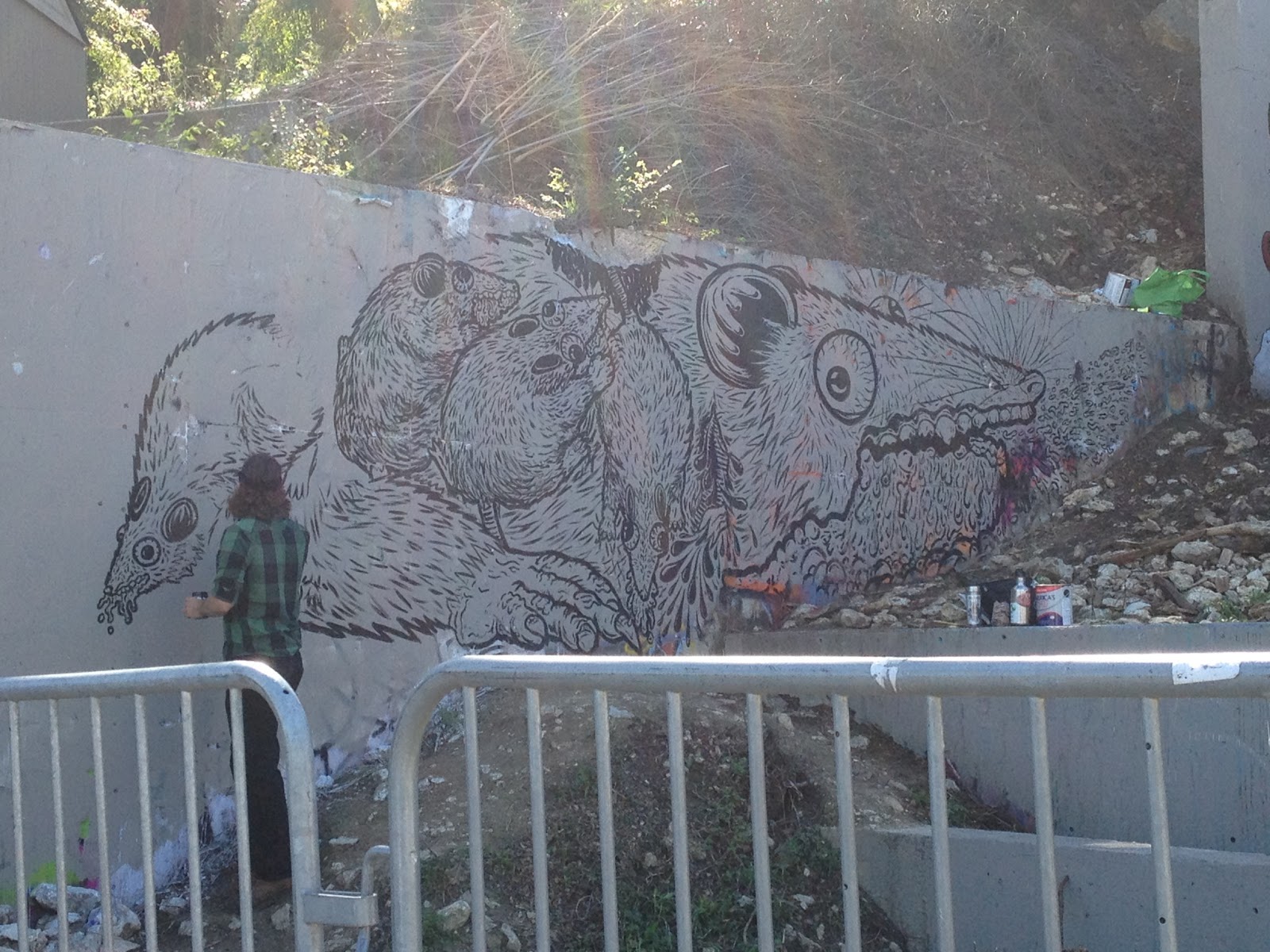 I think I’d like to make one more trip down there before it gets too hot. I look forward to seeing what goes up next.

Whether you call it the Baylor Street graffiti wall, the HOPE Gallery or something else, this place is very Austin and hopefully, here to stay.