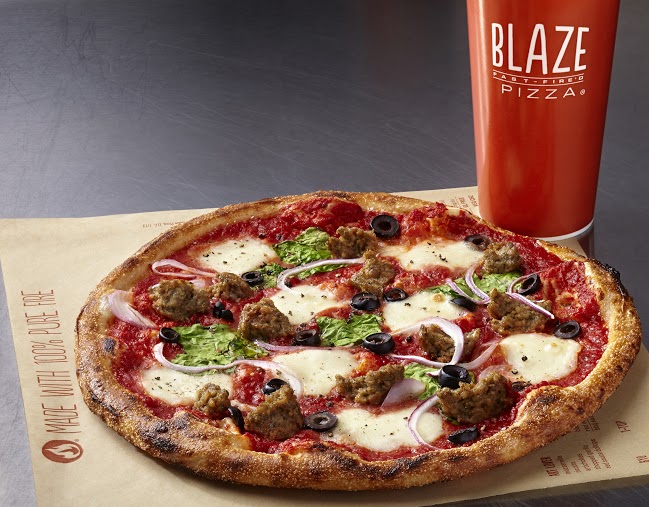 That’s what NBA superstar Lebron James said this past October, as he shocked the sports biz by announcing that he would not renew his sponsorship deal with McDonald’s. And James wasn’t just trying to boost his personal investment in Blaze Pizza. His full endorsement underscores just how quickly this new concept is catching on in fast-casual dining.

With the help of San Diego native Brian Kelley, the chain will open in Austin in December at Lakeline Commons, as what Kelley hopes is Blaze Pizza’s 100th store, and the fourth location in Texas.

The chain began as the brainchild of a partnership between Elise and Rick Wetzel (of Wetzel’s Pretzel’s fame) and renowned pizza chef Bradford Kent (called “the Pizza Whisperer”) who at the time owned a boutique pizza restaurant. The three of them sought to create a restaurant that appealed to a millennial crowd, molded in the style of Chipotle (you’ll see some of the architecture is molded by the famous fast-casual chain), and held together by Wetzel’s fast-casual smarts and Kent’s famous pizza dough recipe.

They opened their first Blaze Pizza locations three years ago, in Pasadena and Irvine, setting the ambitious goal of opening two more each week. Over 2015 alone, the company is closing in on 60 to 70 stores, and Austin is the fourth city in Texas to get one.

So what’s the difference between Blaze Pizza and other pizza restaurants? They focus on college towns, for one. But mainly: You can customize your pie just like you would a sub or a burrito, and they’ll cook it in just 180 seconds.

“We try to customize the Blaze Pizza experience for each city and state,” Kelley said. “For Texas, chorizo is the special item on the menu, whereas in Louisiana, we actually have alligator as a topping.”

If that’s not enough to make you hungry, here’s the best part: On a preselected day during their first week (and only on that day), Blaze Pizza will give away free pies. As you might imagine, giving away one of the most delicious foods known to mankind for free is almost always the best way to say hello. In Kelley’s words: “This has been a great way to announce our presence and build relationships with the local community.”

So, follow them on Facebook and Twitter to make sure you’re up to the minute on their plans. Now, who is hungry for some “make-your-own” pizza?

Whether you’re 5 or 105, It’s always ok to raise your pizza and stick out your tongue. #GenerationBlaze