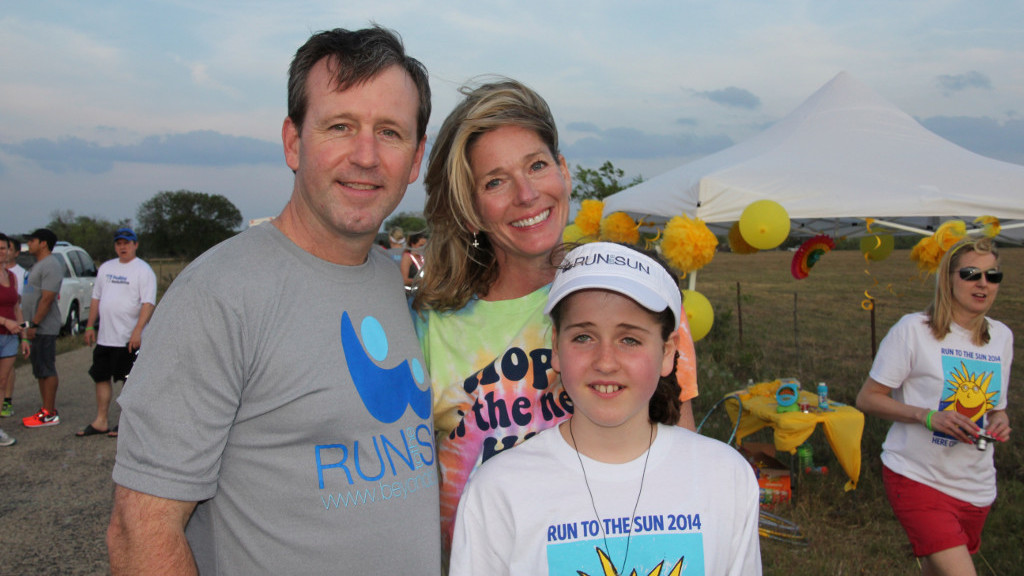 Austin mom Charlotte Benson has a 12-year-old girl named Christiane who is facing an incredibly challenging life. There are no treatments yet for Christiane’s condition. No cure. She has juvenile Batten disease, a rare neurodegenerative brain disorder. This means that Christiane’s neuronal cells are deteriorating. Along with them, her ability to see, walk, and talk is expected to degrade. Christiane is currently losing her vision, relying more on her other senses as her world becomes increasingly blurred, and will likely suffer from seizures, personality changes and ultimately mental and physical incapacity.

Batten is an incredibly rare disease affecting in all of its forms – infantile, late infantile, juvenile and adult – about 2,500 people worldwide. That’s because it is only passed on when two carriers of the same rare genetic defect have a child — and even then, that child has just a one in four chance of getting the disease. Unless a cure is found, children with juvenile Batten disease do not usually live beyond their early 20’s.

Charlotte’s 10-year-old son Garland is thankfully not affected by the disease, nor is he a carrier. He’s also developed a strong bond with his sister. “They are very close,” Charlotte said in a recent interview. “They have opposite personalities. She is very strong-willed and independent. Garland has much more of an awareness of others and their feelings. They are yin and yang. They do great together.” 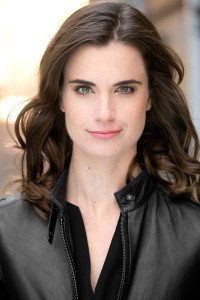 You are reading “Abby In Austin,,” a blog about Austin moms by Abby Roedel. Connect with Abby on Twitter @AbbyRoedel.

Even so, the trials of caring for a child with Batten disease can be “like having your arm lopped off,” Charlotte added. “It is an ever-present awareness in every single thing you do. Every single thing you see, every conversation you listen to – you imagine what it would be like to do that with your daughter. It’s ever present. Not in a heavy sense. It’s just part of who we are as a family. It is part of who I am as a mother, and it has redefined my role as a mother by giving me another responsibility and a new perspective on life.”

The final stages of Batten disease are horrible, but Christiane is not facing the future alone. She understands what is happening to her and still remains hopeful. When Charlotte told Christiane and her brother that kids with Batten disease don’t live a normal life expectancy, Christiane’s response was positive. “Mom, aren’t you glad I have the good kind of Batten? I’ll live past the age of 12,” Christiane told her.

“I can’t tell Christiane that she is going to die of Batten disease,” Charlotte said. “She might get hit by a car tomorrow. I’ve told both of my children that nobody knows how or when any of us are going to go except for God. And short of being God, all we are assured of is today and that’s where we stay focused.”

This is the reality that Charlotte and her family have been living with for over seven years. The next evolution of Christiane’s condition will be seizures, which the family is expecting, but it’s not their focus.

“One thing that is ever present in our family is really focusing on hope and a positive way of seeing life and our faith,” Charlotte explained. “We are a faith-based family and know that there are so many things we can’t control. Control is an illusion. You are ultimately not in control anyway and it’s an acceptance that there is a bigger picture at play. It’s not getting caught up in the ‘why?’ It doesn’t change anything.”

Christiane’s initial diagnosis blindsided Charlotte and her husband. She explained that it literally took their breath away, but they did not let it crush their spirits, weaken their faith, or take away their hope. Instead, the family discovered the goodness of other people, often in ways they may have never known otherwise.

“It’s kind of like you get in a bad car accident and you learn how to live life with whatever result you have from the accident,” she said. “You learn how to get along. To me, as I’ve thought 1,000 times, there are so many more things for which we have to be grateful for than regretful.” 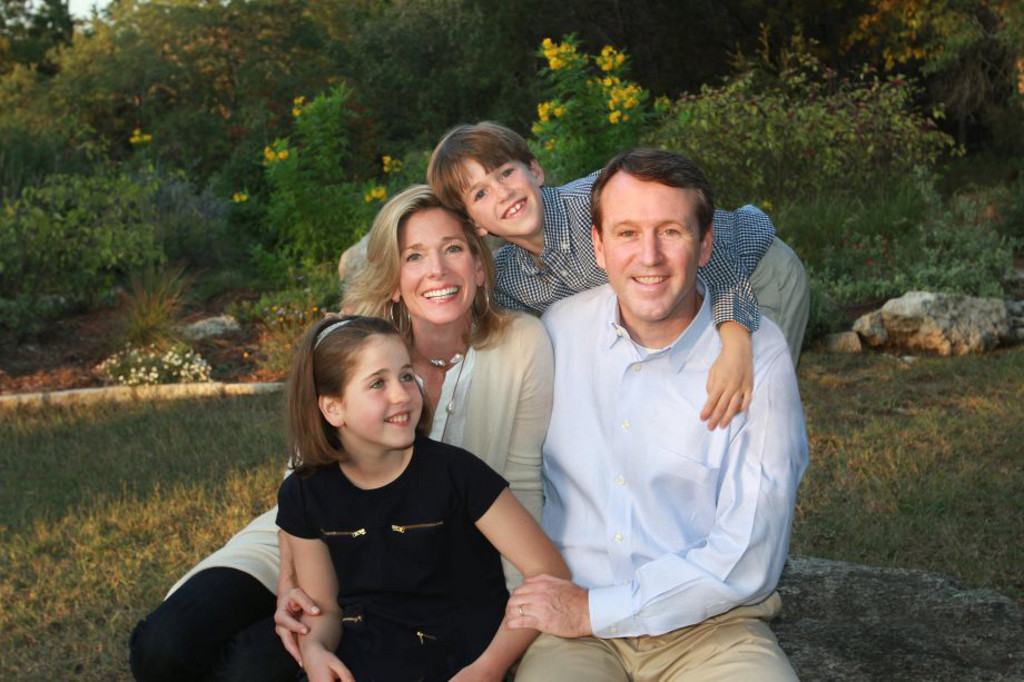 “[Christiane] was a princess in the [Austin nonprofit] Little Helping Hands ball, and they asked the children a few questions before they went up on stage,” she went on. “One of the questions was, ‘What makes you special?’ Christiane said: ‘I’m special, because one day I’ll get to learn to read Braille and one day I’ll get to have a Seeing Eye dog.’ What struck me so much about that was not, ‘I have to,’ but ‘I get to.’ I can’t tell you how many times I’ve thought about those words. I really do believe and know being her mother is a responsibility and an incredible gift. I get to – I get to see the sheer kindness and the compassion and the ability of others. I get to see that up close and that’s a huge gift.”

Batten disease has never received much media attention, but that all changed last month when a Hollywood movie producer announced that his two young daughters were diagnosed with late infantile Batten disease, a different form than Christiane’s diagnosis. Gordon Gray, producer of films such as “Invincible,” “The Rookie” and “McFarland, USA,” along with his wife Kristen, quickly launched a social media fundraising campaign.

A litany of celebrities lined up to support them, including Jon Hamm, Gwyneth Paltrow, and Rhianna — to name just a few. Their intent is to raise $10 million to fund urgent medical research to stop the progression of the disease. Children affected by late infantile Batten disease are typically given a life expectancy of six to 12 years. A video detailing Gray’s daughters’ condition is available here.

Charlotte and her husband Craig know exactly what the Grays are up against just coping with Batten. Trying to raise $10 million by using every connection possible to stop this heart-breaking disease from robbing their child of anything more is an even more daunting undertaking — but they also get that, too.

Shortly after Christiane’s diagnosis, the Bensons started their own medical research foundation, Beyond Batten Disease, specifically targeting treatments for juvenile Batten disease. While they did not have a large network in Hollywood, Craig formerly ran a biotechnology company, giving him a wealth of contacts in the medical and scientific communities, along with all their personal connections in Austin.

Seven years later, the foundation has invested $15.5 million in Batten disease research over the last seven years. They did it by leveraging direct donations, co-funding, and partnerships with other organizations. Compared to 90 percent of nonprofits in the U.S., which typically do not raise more than $1 million annually, Beyond Batten Disease has been monumentally successful.

For Charlotte, the years following Christiane’s diagnosis have been so much more than a sad family story. “It’s also a victorious one of a community of people who want to make a difference,” she said.

Much of Charlotte’s perspective comes down to remaining positive and hopeful. “Hope shows up in dark places, and that’s where it shines most brilliantly,” she added. “We know what the evolution of this disease is or is likely to be if we don’t find a treatment or a cure. I’m grateful to know what its destiny is, because that allows me to live in the moment. That allows me to enjoy daily simplicities that I have with my kids. It doesn’t only allow me, it forces me to be that way. So, I’m grateful for that.”

“Christiane is incredibly independent and confident,” Charlotte concluded. “Her personality is suited for her path. She’s the inspiration for the foundation and is absolutely the most determined child I have ever known. That sort of spunky, ‘I can do it’ belief in herself is really the basis of who we are and want to be. Like Christiane, although our foundation may be small, she inspires us to believe that we can be mighty too.”
—–

The Austin bats are in danger and we're afraid even Batman can't help. Here's what's going on and what you should know about it.
- February 25, 2021
These Are The SXSW 2021 Speakers We’re Most Excited About!