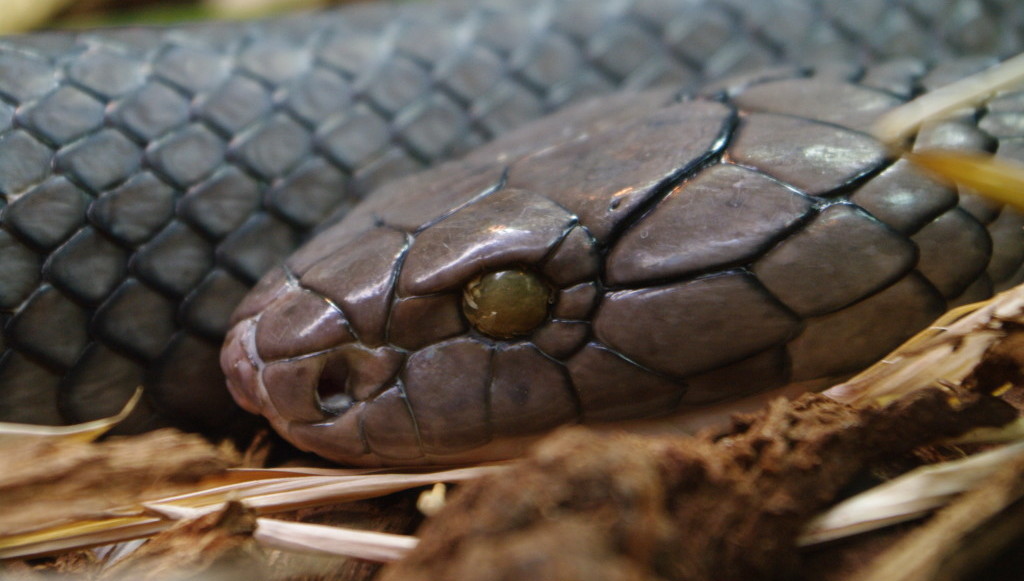 OH THANK GOD: Monocled Cobra Suspected In Teen’s Death Gets Flattened On I-35

Update (below): Dead cobra found on I-35 near Parmer

While they’re still waiting on an autopsy for final confirmation on whether it was snake venom, medics said they found snake bites on the victim’s wrist. They were also tipped off by the victim’s vehicle, which had stickers on it warning of dangerous reptiles. However, no venomous reptiles were found in the vehicle. Authorities did find a non-venomous snake, some spiders, and a frog in the car, but no Cobra. They also said the cage which originally held the Cobra, back at his home, was empty.

Grant Thompson, of Temple, was found in the parking lot of a Lowe’s Home Improvement store near I-35 and Parmer Lane on Tuesday night, slumped over in the driver’s seat. Thompson was transported to St. David’s Round Rock Medical Center immediately, but was pronounced dead on arrival due to cardiac arrest, according to The Austin-American Statesman. The State of Texas requires anyone who owns or handles dangerous reptiles to hold a special permit allowing them to do so.

It turns out, Thompson’s family owns an exotic pet store in Temple called Fish Bowl Pet Express, and he was well known for hosting tours at their facility. In an updated story from KXAN-TV, posted Wednesday at 7:14 p.m., Rod Henry, president of the Temple Chamber of Commerce and a friend of the family, added: “This is tragic news, it’s so sad. It sucks the air right out of you.”

Meanwhile, there’s still the matter of a now-killer Cobra on the loose in the north Austin/Round Rock area, and we’re officially terrified of that. Until someone finds the snake, we’re high-tailing it to Austin’s southern border and finding perch atop a bar or table to ride all this out in the safest way possible. If you’re a north Austinite who’s feeling that same anxiety right now (like most of the folks on our Facebook page), here’s some suggested reading: The Texas Parks and Wildlife Venomous Snake Safety Guide.

Our thoughts and prayers go out to the victim’s friends and family.

Update: Austin Police are officially looking for the Cobra… Which is now mocking them on social media

The APD has issued and APB on what they’re calling a Monocled Cobra, according to KXAN-TV, a species from southeast Asia that’s known to be very aggressive and very deadly. The snake is thought to be somewhere in north Austin, near the intersection of Parmer and I-35, where its victim was found.

As you can see, we’re pretty glad the cops are searching for this guy, because Monocled Cobras are known to be highly active during the day and especially agitated when ambient air temperatures exceed 95 degrees fahrenheit. They’re also more deadly than their better-known cousin, the King Cobra. And, as fate would have it, the 10-day forecast for Austin predicts highs over 95 every single day starting tomorrow.

Meanwhile, someone using a “wanted” poster of actual “monocled” (and moustached) Cobra is getting hundreds of followers on Facebook and Twitter, calling the accounts “Austin Cobra” and mocking local authorities El Chapo style. 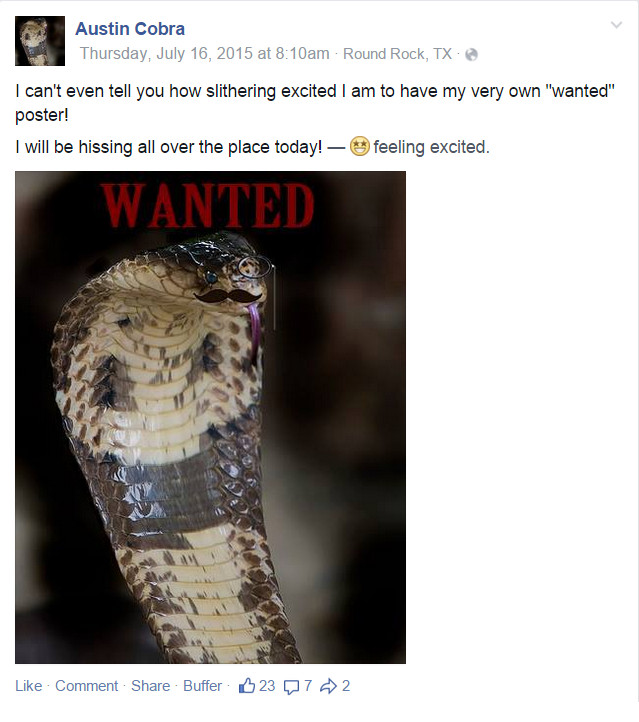 The cobra also popped up on Austin Reddit for an “AMA” (Ask Me Anything), which makes sense because everybody else there is obsessed with Cobra posts right now anyway.

Real mature, guys. But seriously: If you see the Cobra, call the APD. We want this thing captured ASAP.

On a lighter, less terror-inducing note, they’re giving away free kittens at the Austin Animal Center this weekend. The simple act of petting a kitten is a great way to ease anxiety attacks… We’re told.

Update: Dead Cobra found on I-35 near Parmer

This morning around 3:30 a.m., Austin police responded to a report of a dead snake on the I-35 service road near Parmer Lane. A medical examiner has not yet confirmed that this is the same snake suspected of killing Thompson, according to the Statesman. Still, it sure does look like this could be the one…

Austin police have found the cobra that could be responsible for a teenage boy's death http://t.co/gYP1DpLvb1 pic.twitter.com/37eX8L4afj

The Statesman notes that the initial report of a dead snake on the highway came from someone at the Carmax in north Austin. We’ll update this story as soon as they confirm whether this is the killer or not.
——

Editor’s note: This story’s headline was altered from an original version to correct the location cited. The victim was found in North Austin, not Round Rock.