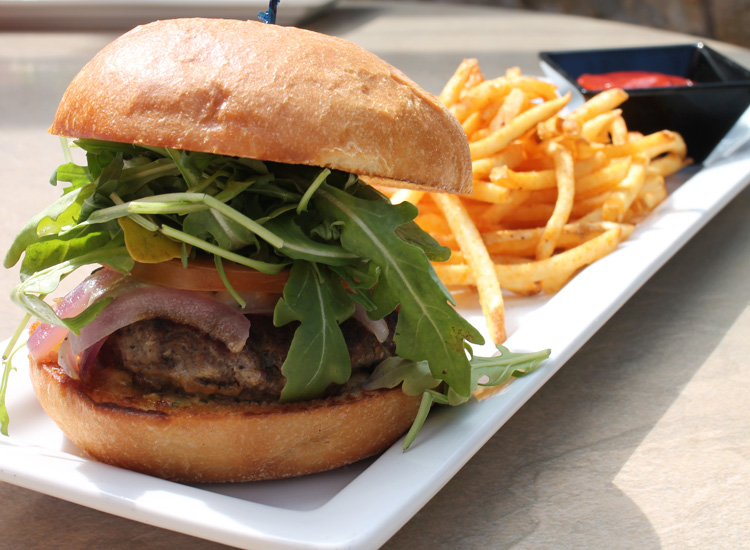 The New Lunch Menu At Z’Tejas Keeps It Cool & Healthy

Z’Tejas has been a fixture in the ever-growing Austin restaurant scene for years, and in my experience they have bee a shining example of consistency. That is why I was so glad to be invited to try out their revamped lunch menu, and pleased to report that the cornerstones of Z’Tejas’ light and healthy new lunch repertoire are delightful indeed.

The waiter advised they would be presenting five options from the new menu, two different salads, a quinoa bowl, and a turkey burger. The first thing I noticed was that the salads could be ordered just as they were, or with the choice of three different proteins: skirt steak, cilantro chicken, or salmon. I really liked this because it instantly made all of the salads that much more versatile, appealing to more than just my palate. 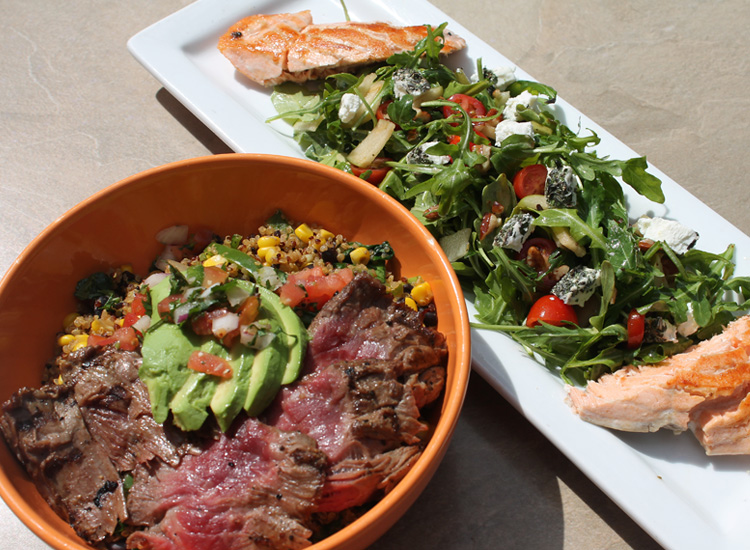 First off was the Caprese Salad, which was served sans protein. Upon first glance, this dish looked pretty boilerplate – big, juicy beefsteak tomatoes, buffalo mozzarella, with a side of arugula salad. The twists on the classic Caprese Salar were buzzing just below the surface. A spicy agave vinaigrette complemented the arugula, while the tomatoes and mozzarella were soaked in olive oil and various herbs to bring even more flavor out. This dish was one of the best Caprese Salads I’ve had. 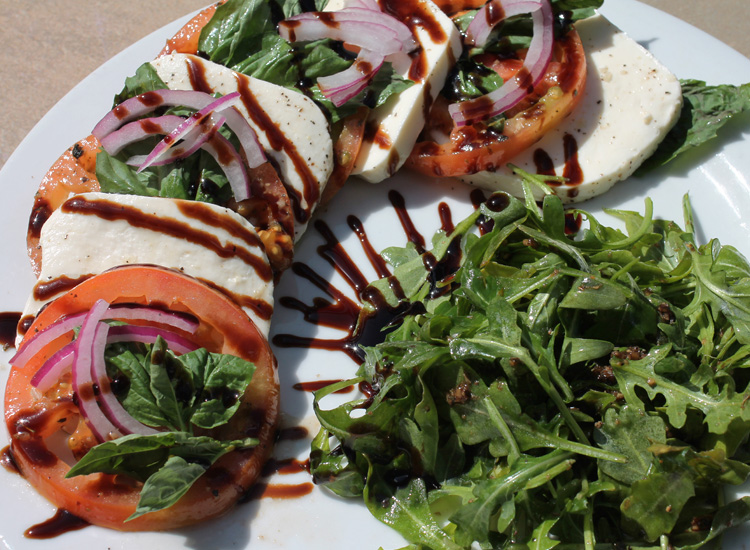 Next up, the bright and perky Arugula and Apple Salad was served with salmon. Although somewhat light, this dish was very flavorful. Salmon was certainly the right protein to pair with these greens, as it complemented the sweet and savory flavors very well. Seasoned, crumbled goat cheese, apple, tomato, and pecans mix up nicely into the arugula, and it all comes together with an amazing agave vinaigrette. 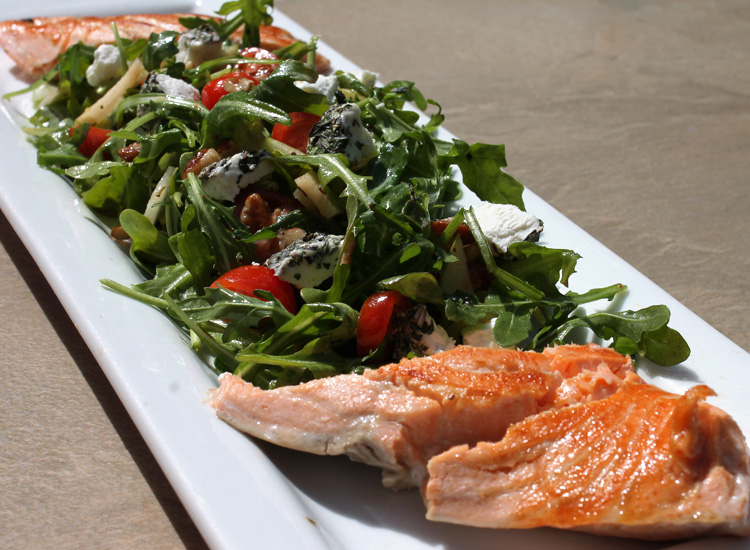 Moving along, the Kale and Brussels sprouts salad with Cilantro Chicken seemed somewhat bulky, considering it was mostly greens, but this ended up playing in the dish’s favor. Kale, Brussels Sprouts, bell peppers, onions, cherry tomatoes, cilantro, and feta all combined perfectly with this protein – the skirt steak would also pair nicely with this dish, too. Mixed in with all of these great veggies was a really tasty raspberry vinaigrette that was a little sweet and spicy. 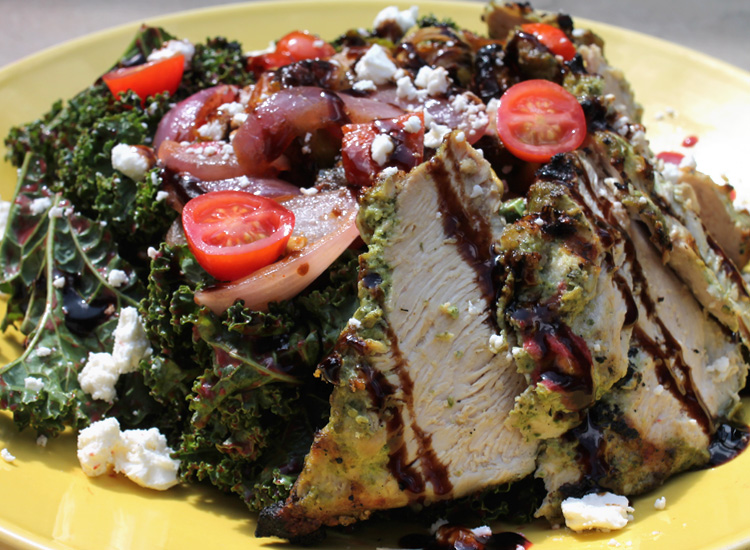 The Southwest Quinoa Bowl was next, presented with skirt steak. Upon first glance, I thought it was a quite a gamble to present a dish like this with steak, but that gamble paid off handsomely. This dish was really good, and serves as a testament to what can be if you use quality, fresh ingredients. Components that you’d think would play nice together certainly do, and then some. Along with the quinoa and choice of protein, black beans, bell peppers, onions, and corn, there are quite a few other flavors jockeying for position. This dish can also be ordered without a protein or cheese, which makes it completely vegan. 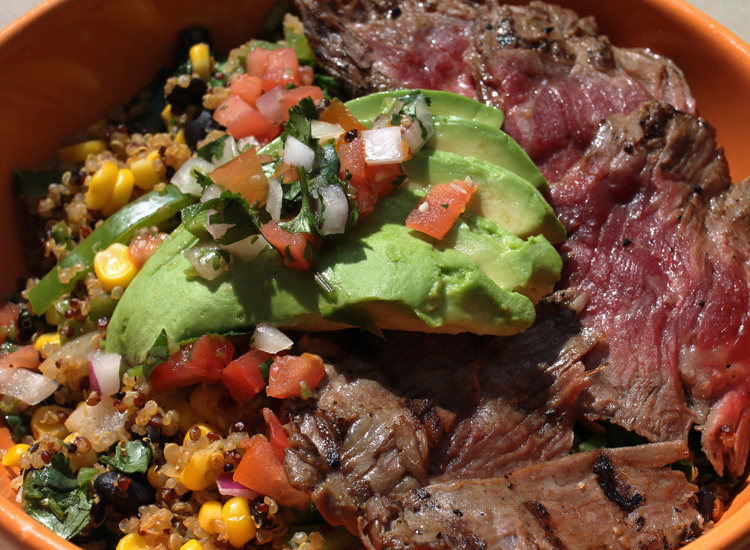 Rounding out the selections I tried from Z’Tejas’s new lunch menu was the Grilled Turkey Burger. I’m not usually a fan of turkey in place of beef on burgers, but this one was exceptionally good. It wasn’t soft and chewy like most turkey burgers I’ve had in the past; it was firm and juicy like as regular beef patty. It also came equipped with cilantro aioli and mozzarella, a cheese that’s not usually on a burger, which worked really well atop the somewhat subdued flavor of turkey. All in all, this is a very good turkey burger that’s not to be missed.

All told, Z’Tejas’s complete makeover of their lunch menu has my full endorsement. This restaurant has always been great for dinner, but this new healthy menu should put them on your must-dine list for lunch as well.