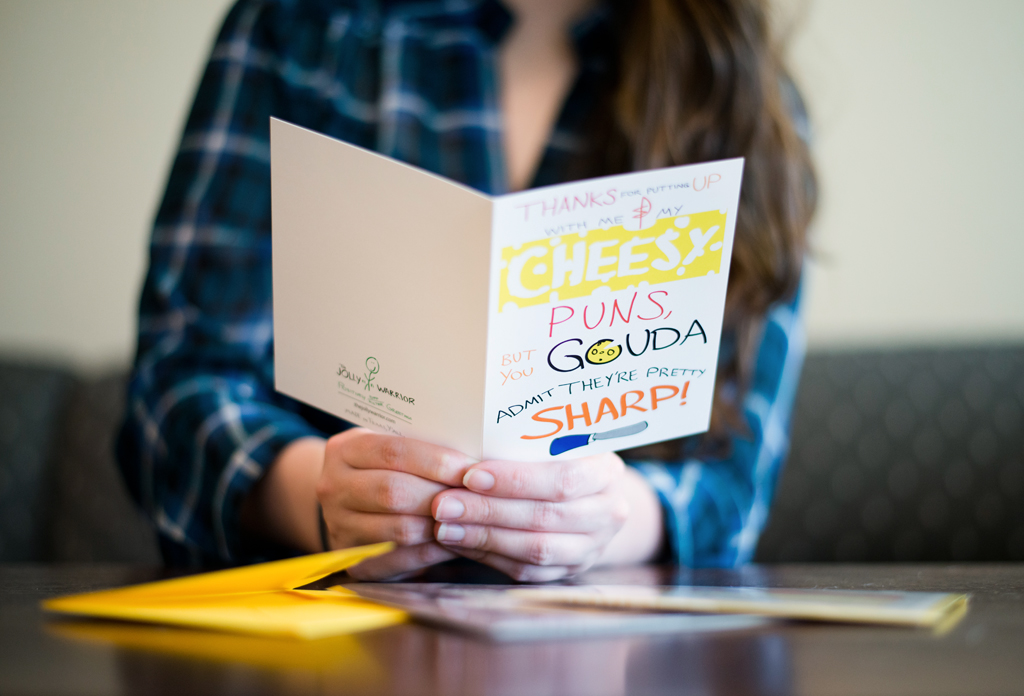 It’s probably safe to say that we Austinites like our greeting cards the same way we like our music — eccentric but endearing. That’s precisely why The Jolly Warrior, a local startup selling quirky handcrafted greeting cards, is bound to turn heads and make sales in the Capitol of Weird.

Enter Laura Romer, the in-house marketing copywriter and long-time Austinite who founded The Jolly Warrior as a creative outlet. Romer is a twofold alum, having earned her Bachelors in Communications at Georgetown’s Southwestern University and a shiny Masters Degree in Advertising from UT Austin. Equipped with a Wacom tablet, Adobe Illustrator, and a deep reservoir of wit, Romer designs offbeat greeting cards in hopes of enriching her customers’ social lives, one cheesy pun at a time. “I love when you listen to a song or see a photograph and you think, ‘Yes! It knows me! How does it know me?'” Romer told Austin.com. “I love those moments when you discover something new that you instantly connect with. That’s my goal with these cards. Not every card is for everyone, but maybe there’ll be one card where you go, ‘Nailed it.'”

Currently, Romer has nine cards listed in her Etsy shop. Each one features a tried and true theme such as friendship, love, gratitude, or sympathy, but is presented in off-kilter fashion. Take the porcupine card for instance, with its “thanks for sticking with me” sentiment. Then there’s the cupid card, which pokes a little fun at the myth, and the long distance card, which bears the message “I miss seeing you from up close.” And we’re sure we don’t need to explain why the beard card is awesome.

The rest of Romer’s catalog is just as entertaining, and she’s got plans to produce many more designs the coming months, including a plaid card, a whale pun, graduation and birthday cards, and of course, Austin-themed topics. Humorous thoughts that don’t suit the greeting card medium are published on The Jolly Warrior’s Facebook page in comic form.

“I like making people laugh,” said Romer. “There’s the polite laughter where you can tell that someone’s brain just went, ‘This is the part where you laugh,’ but when humor catches people off guard and they genuinely laugh, that’s a real victory, I think. When people actually laugh out loud in real life.”

Indeed, that’s where the name “The Jolly Warrior” comes in. Laughter actually can be an uplifting force against the disappointments in life. Romer hopes that her messages will encourage card recipients to keep floating on and maybe even begin to find the humor in otherwise stressful situations, a choice she admits having to make every day in “rage cage” rush hour traffic.

Despite her distaste for Austin’s transportation woes, Romer is predictably a huge fan of ATX, having lived here a good portion of her life. Her favorite restaurants are Le Café Crepe and anywhere that serves delicious TexMex — especially breakfast tacos and salsa — but what she loves most about our city is its relaxed, “small town” vibe, its colorful and incredibly talented art scene, and naturally, its weirdness.

To learn more about Romer and her company, you can visit The Jolly Warrior’s website or Facebook page. However, Etsy is the place to go if you’re looking to purchase cards. You know you’ve already fallen in love with the beard card. Don’t lie.