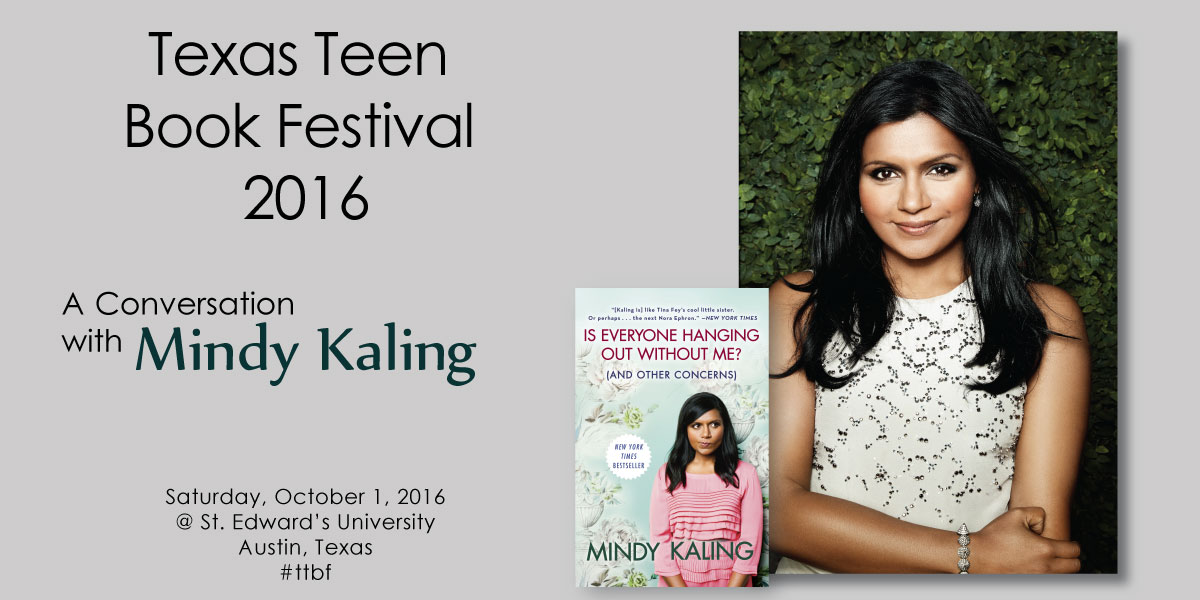 The Texas Teen Book Festival is nearly upon us! And this promises to be the best one yet, boasting all-star, award-winning featured authors like Mindy Kaling and Sabaa Tahir (to name just two), as well as book signings, workshops, a first-ever costume contest, the festival’s very own game show, and more.

To quote TTBF Director Julie Wernersbach, the festival is a “cannot-miss-it, star-studded, action-packed, non-stop, unforgettable, epic day of YA on the campus of St. Edward’s University.”

Event Information and a Few Highlights

This year’s TTBF will be held Saturday, October 1, 2016, from 8 AM to 6:30 PM, at St. Edward’s University—and as always, it’s FREE to attend! The first 250 people to purchase Mindy Kaling’s book at the Festival Store will get to attend her book signing (8:30–10 AM), which will be followed by A Conversation with Mindy Kaling from 10:15–11:15 AM. Festival attendees can also look forward to keynote speaker Laini Taylor and closing note speaker Leigh Bardugo, along with panels and sessions by award-winning authors such as Ally Carter, Jeffery Self and Traci Chee. Keep up with announcements at the festival’s event page on Facebook and on Twitter and Instagram (#ttbf, @TXTeenBookFest).

The Authors and the Books

Along with the authors mentioned above, festival-goers can look forward to other middle-grade and YA faves like Isabel Quintero, Roshani Chokshi, David Arnold and more. Check out the full list of authors attending this year’s Texas Teen Book Festival for more info and links.

The Festival Store, sponsored by local fave BookPeople, will be set up in the St. Edward’s Alumni Gym from 8 AM to 6 PM the day of the festival. For every one title you purchase at the festival, you can bring three books from home to be signed by your favorite authors. Cash, checks and credit cards will all be accepted at the bookstore. Click here for a complete list of the books that will be available for sale at the festival.

The Game Show and Costume Contest

TTBF featured authors Saaba Tahir, Rene S. Perez II, David Arnold, Caleb Roehrig, E.K. Johnston and Jeffery Self will be competing in the infamous Texas Throwdown Game Show, which ruthlessly pits authors against each other in a battle for the ages. Look forward to fun and silly competitions like stylish toga wrapping and Pictionary, with points awarded or deducted at whim!

The festival will also host a Costume Contest sponsored by Fierce Reads from 1:15 to 3:30 PM, with the winner announced at the start of the festival’s closing keynote. Festival-goers can visit the Fierce Reads Photo Ops Booth dressed in costumes from their favorite novels to snap a few shots in their creative gear. A few lucky winners, as determined by a team of authors and the TTBF cosplay crew, will go home with fun literary prizes, including brand-new books generously provided by Fierce Reads.

The TTBF has teamed up with another local fave, Alamo Drafthouse, along with Penguin Teen, for a very special pre-festival event—a screening of The Outsiders, the classic film based on the even-more-classic novel by S.E. Hinton. The film screening will be held at Alamo South Lamar on Friday, September 30; doors open at 6:30 PM, with a Q&A before the movie with Penguin Teen authors Sabaa Tahir, David Arnold and Renée Ahdieh, who will discuss this seminal work of the YA genre and its special spot in their hearts as writers for a young-adult audience. Tickets for the event are now on sale for $25.

There will be many more workshops, panels and book-signings scheduled throughout the day; check the full schedule of events or view the one-page version for more details.

About the Texas Teen Book Festival

Born as the Austin Teen Book Festival in 2009 and re-born in 2014 as the Texas Teen Book Festival, this one-day event celebrates the teen reading experience by inviting fans to visit with some of the most popular and critically acclaimed young adult authors in the country. The TTBF is presented in collaboration with the Texas Book Festival, BookPeople, a dedicated team of volunteers, librarians, and venue sponsor St. Edward’s University. The program is made possible in part by a grant from Humanities Texas, the state affiliate of the National Endowment for the Humanities.