A couple weeks ago, a friend invited our family to join his at Guero’s Taco Bar on a late Wednesday afternoon to enjoy a Texas Radio Live broadcast. What?! How had this fun, FREE, weekly event completely escaped my notice until now?If you’ve been similarly living in the dark, it’s time to step out into the light, my friend. Every Wednesday evening from 6–8 PM, KDRP (100.1 FM, a local non-profit community radio station serving Dripping Springs and the surrounding Hill Country) presents Texas Radio Live out in the Guero’s Oak Garden — that pretty, tree-filled, wrought-iron-fenced area just north of Guero’s restaurant on South Congress at Elizabeth Street.
Texas Radio Live is a live radio broadcast featuring Texas musicians, and it’s free to the public (although you can always make a donation if you’d like to help support the KDRP Radio Mission of “preserving the culture of Texas music with a minimal impact on the environment”). 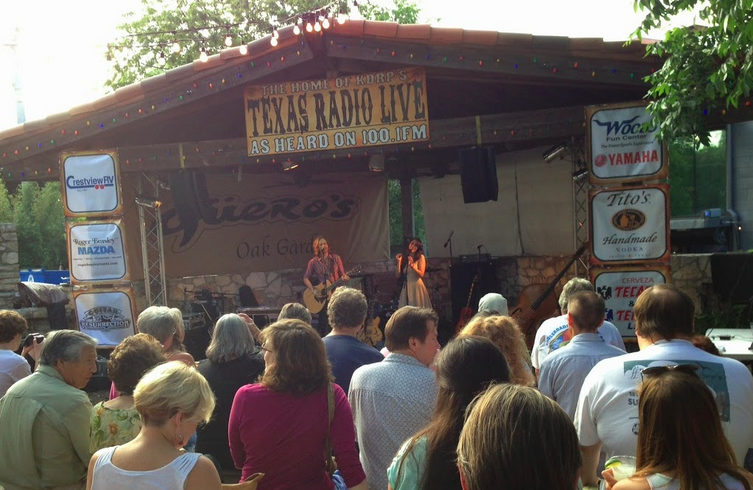 When we attended Texas Radio Live in late May, we arrived at 5:30, a half-hour before the broadcast was scheduled to begin, and parked in the garage right behind Guero’s (which you access from the alley that runs parallel to Congress between Elizabeth and Gibson Streets). If you take your parking ticket into the main Guero’s restaurant, they will stamp it for you, giving you two hours of free parking.

Though we’d arrived early, there was a bit of a line to get in — which was unusual, according to our friend — and there was actually a $5 suggested donation, since Austin faves Kelly Willis and Bruce Robison were playing. (Such “bigger-name artists,” according to the folks at the entrance, sometimes merit a suggested donation at the live broadcasts.) Fortunately, we had cash, though it would have been fine if we didn’t; they would still have let us in for free. As it was, they only asked us adults to pay $5 each; our children got in free of charge.

The Oak Garden is a nice place for kids, even in the heat of summer. The live oaks that shade much of the area keep it cooler and breezy, and the garden is enclosed by a wrought-iron fence, so kids can run free (at least somewhat).

There was a full bar where you could order drinks, queso and $2 tacos — either chicken or pork. (The only vegetarian offerings were queso, tortilla chips, and the pico de gallo and other salsas.) It was cool to watch the guys cook your tacos to order out on the open grill and serve them up fast and fresh. Once they’re ready, you dress them up with whatever salsas and other toppings you want. Oh, and the chips and salsa are free!

The small stage faces a bunch of rows of benches that aren’t shaded by oak trees, so the main seating area does get pretty warm in the early evening sun. There are other, smaller benches farther away from the stage, however, and those are in the shade, so that was where we parked ourselves. Those benches are on a little hill, so you can still see the stage well enough, at least until the place fills up and it’s standing-room-only.

The night we were there, a duo called Dawn and Hawkes opened for Kelly Willis and Bruce Robison. I’m not sure why, but Pearl was the only one who got up and danced!

This was a really fun outing for our family. Because of the big-name musicians playing that evening, the show did get crowded, but it never felt uncomfortable or unmanageable, and the crowd was very friendly. I’d like to go back on a less crowded evening and see what that’s like, too. Maybe I’ll see you there! 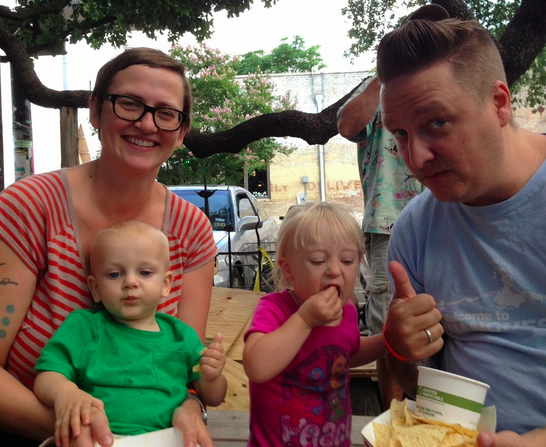 Here are a few tips to make your trip easy and enjoyable:

The what, where and when: