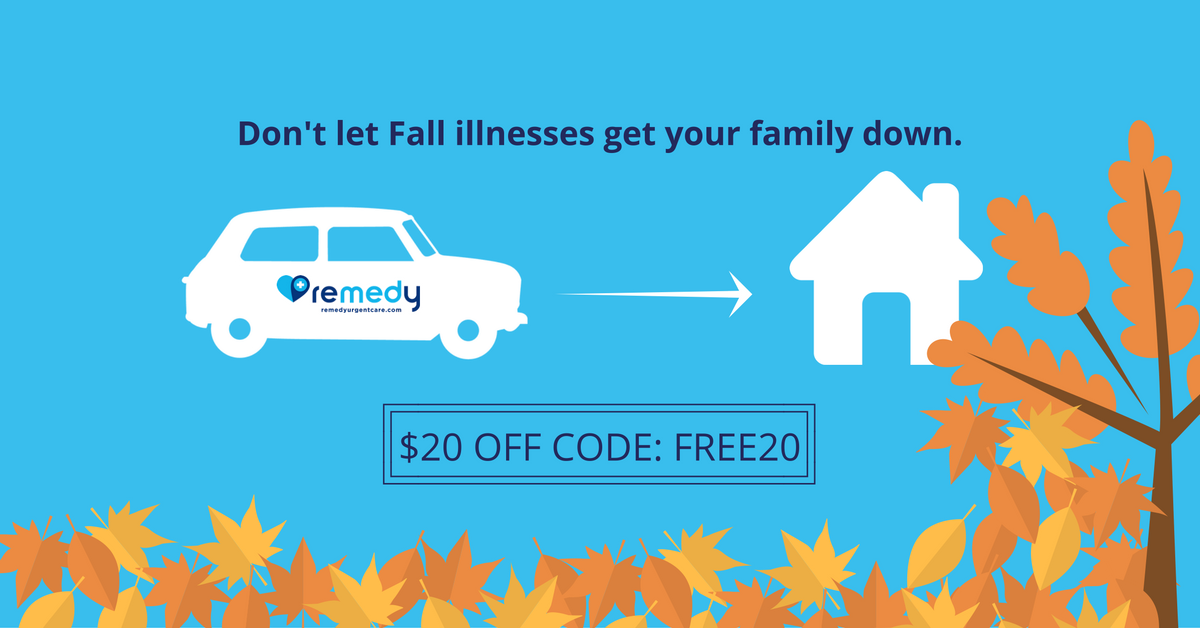 Strep, Flu and Croup: What to Look For

Don’t let fall illnesses get your family down. In this post, our friends at Remedy Urgent Care share what to look for when your child gets sick, plus a code to save you $20 if you want the doctor to come to you!

With fall ramping up, physicians are starting to see an increase in respiratory infections in both kids and adults. These are some of the common-but-scary illnesses that often worry parents, so we compiled some tips on what to look for when your child starts to feel sick.

The most common complaint when suffering from strep is usually a severe sore throat and pain when swallowing.  Often, a fever will appear, although early on there may be no fever. Although not as typical, some children will also have a runny nose and congestion.

Those aren’t the only symptoms, however. There are others that seem less common but can nonetheless be telltale signs. Your child might refuse to eat, or vomit, have difficulty sleeping, or complain of stomach discomfort. It can be hard for children to articulate what exactly is hurting in cases such as these, so be on the lookout for descriptions of “belly pain,” which is occasionally the only early sign that your child has strep throat.

It’s also important that your physician follow the standard of care for a potential case of strep throat. He or she should administer a quick strep test (with a cotton-tipped throat swab)—which takes about five minutes—before prescribing antibiotics. Strep is one of those rare throat infections caused by bacteria, so it’s important to be absolutely sure that the prescribed treatment will be effective.

While influenza cases in and around Austin aren’t prevalent yet this season,  we’re starting to see instances pop up throughout Travis County. Once we start seeing a few cases, they tend to quickly multiply because of how contagious the flu can be, especially in classrooms and close quarters.

It’s quite common for children to complain of body pain when they have influenza, so be aware of descriptions of physical aches and pains. Ask about a sore throat and runny nose, and check your child’s eyes to see if they’re more watery than usual.  Fever is usually present with influenza, but early on in the illness it may not show up.

Keep an eye out for an email from your kid’s teacher(s) as well, or even a passing reference from your child directly. Teachers will usually send notes home letting parents know that the flu is popping up in classrooms, or your child might even mention offhandedly that a few of his or her classmates weren’t at school this week.

The biggest (and loudest) symptom of croup is a wracking cough akin to a seal barking. It’s a very distinct cough and usually peaks in the middle of the night. There may also be a fever and a runny nose.

Like the flu, croup is a virus. Unlike many viruses, however, there is a quick and effective treatment. A one-time administration of steroids can alleviate the swelling of the airway that causes the main symptom of croup.

The bad news is that we’re seeing an increase in these types of infections now that fall has arrived. The good news is that Remedy Urgent Care can administer tests and treatments for these respiratory infections and much more without multiple trips, directly from the comfort of your home. Free Fun in Austin readers can use code FREE20 to receive $20 off your next Remedy house call.