Our first #SoAustin News montage focused on weird that went down in February, covering topics such as the serial Foot Stomper who has been targeting Austin women, the couple who got married while waiting in line for Franklin Barbecue, and the tragic passing of Cash, the Death Metal cat from East Austin.

In this, our second installment, we’re going to be recapping all of the craziness that ensued throughout March, especially as SXSW 2016 descended. Just a fair warning — it got pretty weird out there last month. Don’t say we didn’t warn you!

The Austin vs. San Antonio Taco War is over 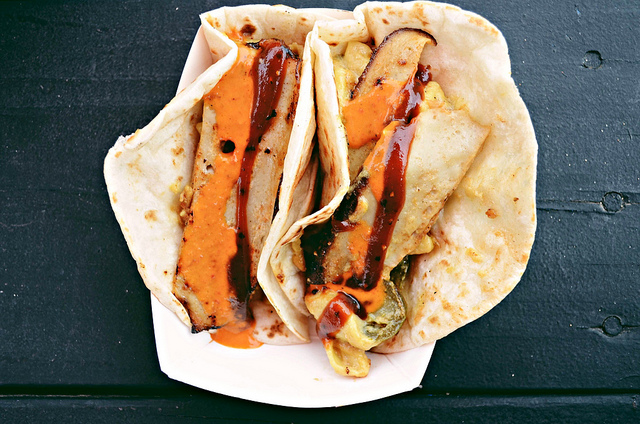 Things were fairly tense between Austin and San Antonio for several weeks after Eater Austin published an article about the history of the breakfast taco that credited Austin for its rampant popularity. Happily, however, Mayor Steve Adler and San Antonio’s Mayor Ivy Taylor were able to settle their differences and strike a truce. This resulted in a “Taco Summit” (which sounded to us like an excuse for them to hang out and eat a bunch of tacos) and a new holiday in both cities. Let March 10 forever be known as “Breakfast Taco Day!”

But we still had drama

The Great and Terrible Taco War might be over, but several topics raised some tension in our community throughout the month. First, Whole Foods started selling pre-peeled oranges. For some reason, people freaked out, so WF quickly pulled the line, only to upset a different demographic: people with disabilities.

Austin park officials also stirred some controversy when they banned a group of dance walkers (yes, it’s a thing) from cavorting down the Lady Bird Lake Boardwalk and Hike and Bike trail. Proponents of the group suggest that dance walking is in line with keeping Austin weird, but according to the law, city parkland can’t be used for organized runs and walks — and certainly not with a blaring portable radio in tow.

We’re not sure how to feel about either of the above issues, but we can tell you this: we were HOT when we heard that advertisers had defaced some of our most beloved murals during SXSW. Don’t mess with our street art, man. It’s just wrong.

As usual, SXSW oddities were everywhere

Disney even set up a life-sized TIE Fighter on Rainey Street to celebrate the SXSW debut of their new Star Wars documentary, “The Story Awakens.” Shortly afterwards, APD effectively declared war on the First Order by arresting a Stormtrooper who according to Reddit users, either failed to present a valid ID or was caught trying to steal the TIE Fighter. As far as we can tell, the officer didn’t have to use the Force to defuse the situation. Ahem.

Oh, and yes, Grumpy Cat definitely still hates us all — so that’s good.

The POTUS and FLOTUS stopped in

Marking the very first SXSW appearance made by a sitting president or first lady ever, both Barack and Michelle Obama flew into town to speak about technology and women’s rights, respectively. Barack delivered SXSW’s esteemed Keynote speech, which took place at The Long Center for the Performing Arts, and he also crashed two Democratic National Committee’s fundraisers — one at Austin Music Hall (which apparently hadn’t been demolished yet) and a smaller event held at a private residence in Tarrytown.

During these appearances, he declared his undying love for Austin, Texas in no uncertain terms:

“It’s just a thing, me and Austin, Texas. We’ve got a psychic connection. I love Austin, Texas. I really do,” he reportedly told guests at Austin Music Hall, according to The Austin American-Statesman. Then, in Tarrytown, he admitted: “When I go to any city, I always say I love the city. But I really love Austin.”

Also during his stay, the President stopped by Torchy’s Tacos to order a Democrat, an Independent, and a Republican — because he’s “bipartisan,” of course.

Unfortunately, the Barack and Michelle’s landmark visit did nothing to improve traffic conditions during SXSW. Now that Austin’s population has officially grown to two million, city officials did a lot to try to preemptively keep downtown out of total gridlock. For the music weekend when traffic is at its worst, ASD let out early and Mayor Steve Adler asked employers to consider allowing their employees to work from home and begged locals to essentially stay home or walk, bike, or utilize public transit to get to and from SXSW events.

Did it help? Meh. Maybe. We did, however, find these road closure and detour maps to be supremely useful in our own navigation efforts:

And then there was this hero, who like a paladin has been passing out flowers during rush hour from atop his motorcycle steed to encourage positivism among drivers. We really should knight him or something! Sir Scott Hardy definitely has a ring to it.

This month, Austin firefighters responded to one of those common “omg-there’s-a-cat-stuck-in-a-tree” calls, but the damsel kitty actually turned out to be a raccoon! The little guy, who we’ve named “Bergie,” had apparently decided to take a nap on top of a light pole along Highway 71 near Austin-Bergstrom Airport.

And finally, an Austin family is selling their English manor for 22.9 million dollars. Why so expensive? For one, it’s a friggin’ 10,500 square foot mansion located on 31 acres of prime real estate along the shores of Lake Travis. According to Austin Business Journal, the property also comes with “equestrian facilities, a boat dock and party deck, helipad, waterfall and koi pond, formal gardens, pool, spa, tennis courts and sports court” plus a 2,932 guest house, a manager’s house attached to the stables, and a 7-car garage.

Now that’s all well and good, but what we Muggles really care about is the giant Harry Potter-style Wizard’s Chessboard that the family has installed in their garden. We totally need one of those in Zilker Park. Who’s with us?!

With that, we’re signing off, Austin. If you like these news recaps, be sure to follow That’s #SoAustin on Facebook to get a daily dose of ATX weird delivered straight to your News Feed. Until next time!