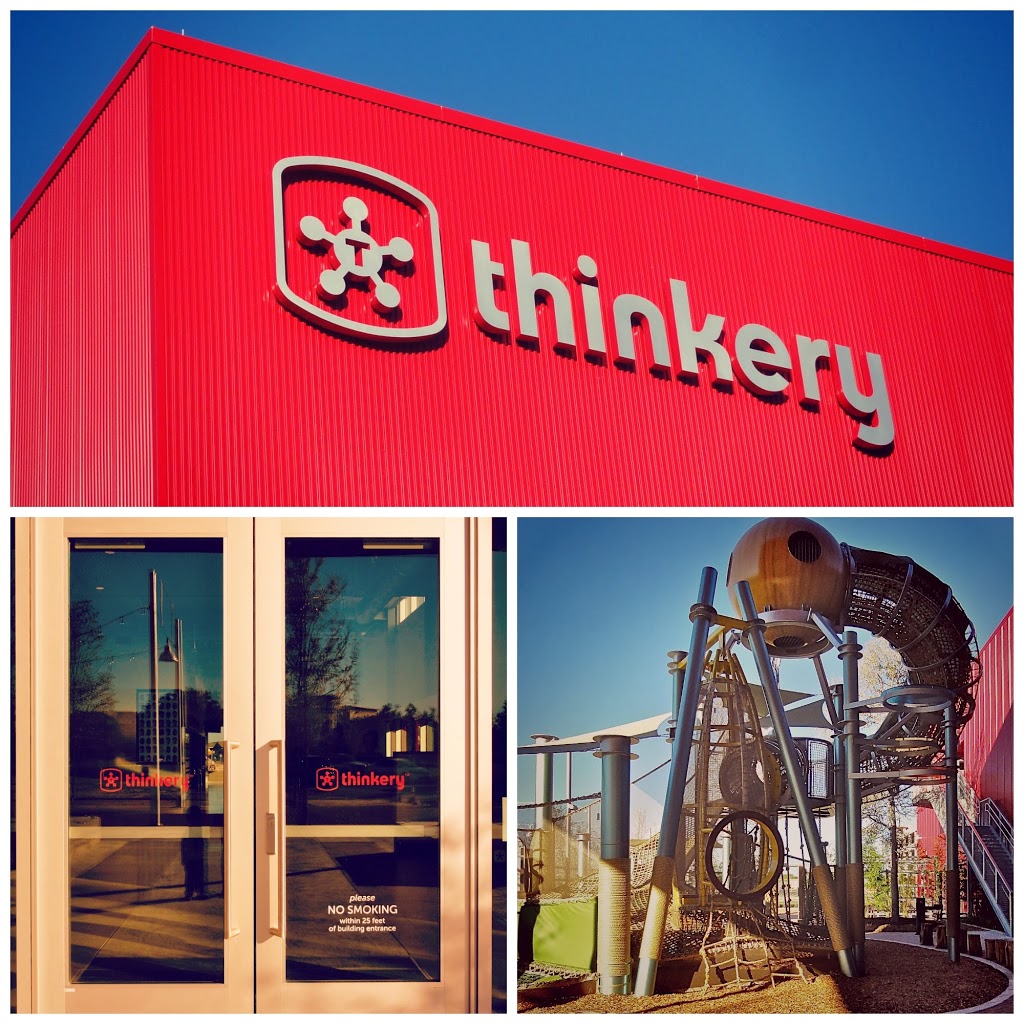 My family had the exciting privilege of attending a sneak peek at the Thinkery, the new Austin Children’s Museum, earlier this month. We were part of a group selected to go in and test out some of the exhibits while being observed by Thinkery staff. Their goal was to see how families interact with each other and the exhibits in order to make final improvements before the grand opening. Aside from the fun of being among the first to explore the Thinkery, it was amusing to watch the staff react to the unexpected ways in which some of us played. 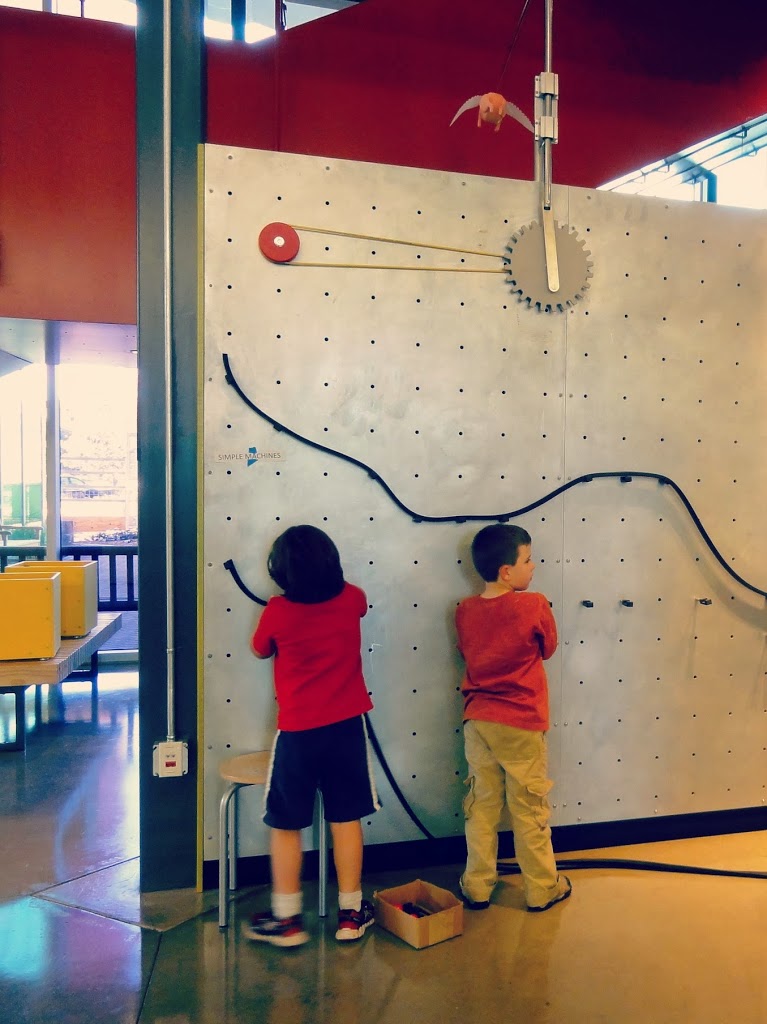 For starters, I’ll tell you that the building itself is beautiful. It is bright and airy with space that feels well suited to its purpose. The huge windows and natural lighting are a welcome change from the old ACM, which always made me feel a bit like I was trapped in someone’s basement. One of my toddler’s favorite experiences was playing chase with me in a maze of rainbow-hued plexiglass panels that glowed in the afternoon sunlight. Lovely. Then there’s the amazing outdoor portion of the museum, Our Backyard, which houses an out-of-this-world, universally-accessible playscape and space for educational programs.

With the Austin Children’s Museum’s move to Mueller comes a new focus on STEAM learning: science, technology, engineering, art, and math. As a result, I found that the exhibits we experienced during our visit were skewed to a slightly older age group than the old ACM. That’s not to say that my two-year-old didn’t have fun, because he absolutely did. What it does mean is that my six-year-old kept endlessly busy at the Thinkery, whereas there was never much to keep him occupied at the old location. Our whole family, from toddler to Grandma, stayed thoroughly engaged and entertained.

What we saw of the first floor presented an eclectic mix of activities ranging from a stop motion animation station to kid-friendly microscopes that projected their images on large flat screens. Highlights included a pegboard wall with flexible rubber track for building ball-racing obstacle courses and a series of large plexiglass panels for painting (and spraying and wiping and squeegeeing). Tucked in a back corner was Light Lab, where we amused ourselves with shadows, prisms, illuminated peg boards (imagine an enormous Lite Brite) and light tables covered with translucent building blocks.

The highlight of our visit was the Currents exhibit at the top of the stairs. We’ve been to other children’s museums with water activities but we’ve never experienced anything like the Thinkery’s water wonderland. This room may well contain the most entertaining lesson in fluid dynamics ever conceived, made even better by a distinctly musical theme. Currents consists of a collection of water tables and gadgets, many with a musical theme. Kids can fill a set of brass bowls with water and hit them with drumsticks to discover the different tones created by varying water levels. Drums placed strategically below drips from an overhead pipe create melodies. A huge, water-filled pipe becomes a flute when curious fingers manipulate the spray shooting out of its myriad holes. Numerous cranks create whirlpools, activate spray nozzles, spin water wheels and fill buckets that dump their loads (often on unsuspecting bystanders) when they reach capacity. My six-year-old’s favorite activity was piecing together a series of bamboo half-pipes to redirect the water flow onto the floor. I doubt that was the outcome expected by our observant Thinkery staffers, but it was an engineering marvel nonetheless.

The second floor is also home to Kitchen Lab, where a kitchen and a science lab meet to make awesome. On the day we were there, the staff-guided experiment consisted of using a brown paper bag and a hair dryer to determine which of a plateful of foods had the highest fat content. The results weren’t mind-blowing but it was fun to see our predictions proven. (And to eat the tiny morsels when we were done.) To me, Kitchen Lab holds the most potential of the exhibits we saw simply because I expect something new and different will always be happening there. 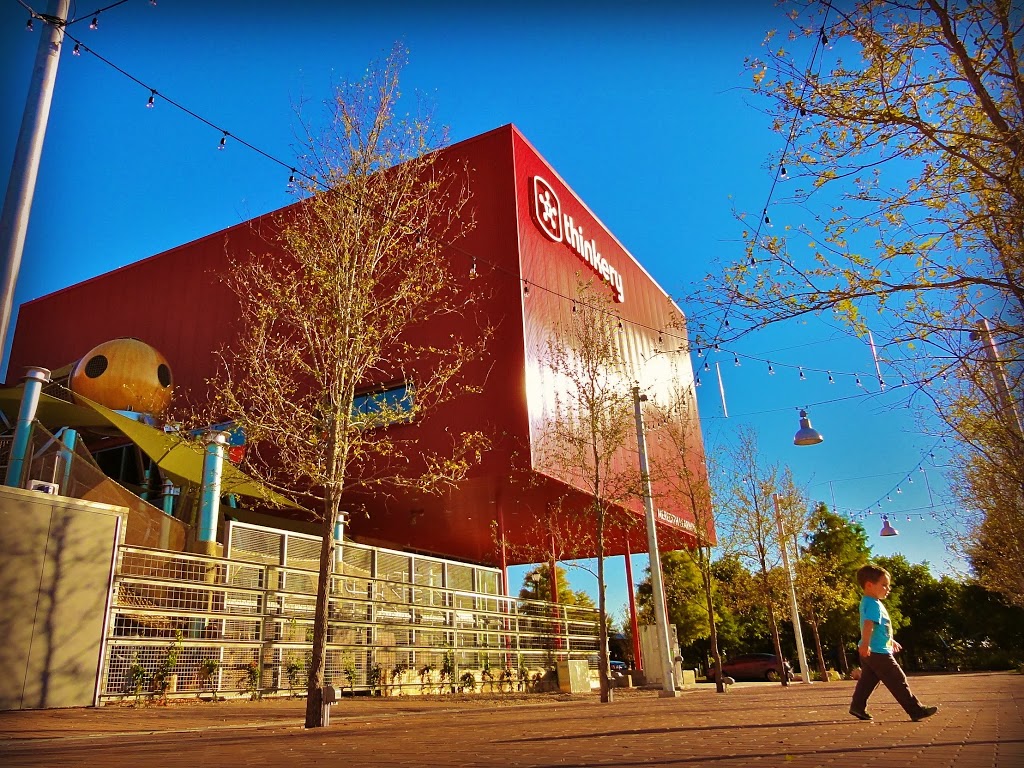 The Thinkery’s grand opening is planned for Saturday, December 7, 2013. Find the new Austin Children’s Museum at 1830 Simond Avenue, directly across from the Mueller playground.

Learn more about the Thinkery at http://thinkeryaustin.org.