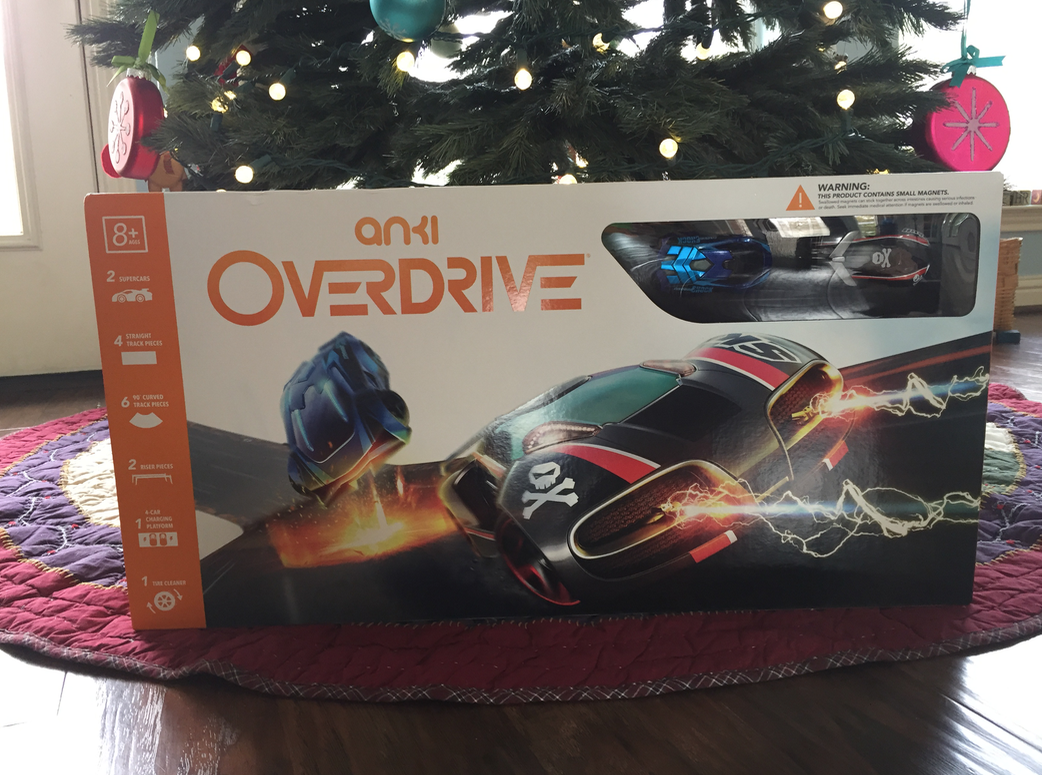 Christmas came early at our house this year, with the arrival of one of the best-selling gifts this holiday season: Anki OVERDRIVE. An exciting blend of futuristic racing robot cars and old school slot car racing, Anki OVERDRIVE was a big hit with my kids, from the toddler to the teenager.

When asked if I’d like to test drive the new Anki tech toy, I accepted knowing that my elementary school-age boys would love racing cars around a magnetic track. What surprised me was how much my teenage son also loved the game. He was the only kid home when the box arrived and had the track set up in minutes. After downloading the free app to his phone, he was off to the races!

Anki OVERDRIVE uses artificial intelligence to guide “supercars” around a track, which can be set up in a variety of configurations. Instead of remotes, the cars are controlled through a smart phone app, making the race an immersive video game experience. Multiple players can compete using their own devices to control the cars, and my kids couldn’t wait to “battle” each other on the race track. Each supercar is a smart robot, capable of learning any track that you build, and adapting to each new race. Operators can swap out cars, customize weapons, and build a new course, so no two races are ever quite the same.

Here is what my kids had to say about Anki OVERDRIVE.

I think it’s cool because you can play by yourself or with other people. It’s fun to compete, not just on a physical racetrack, but also in the virtual reality of the track. I also like that you are able to customize the racetrack into tons of different layouts. Overall, it’s a fun toy that is great because there are different game play modes that allow you to challenge yourself and others with unique trials. I enjoyed competing with my brothers and thought it was interesting that you can unlock and upgrade parts of the cars to keep the racing different each time. 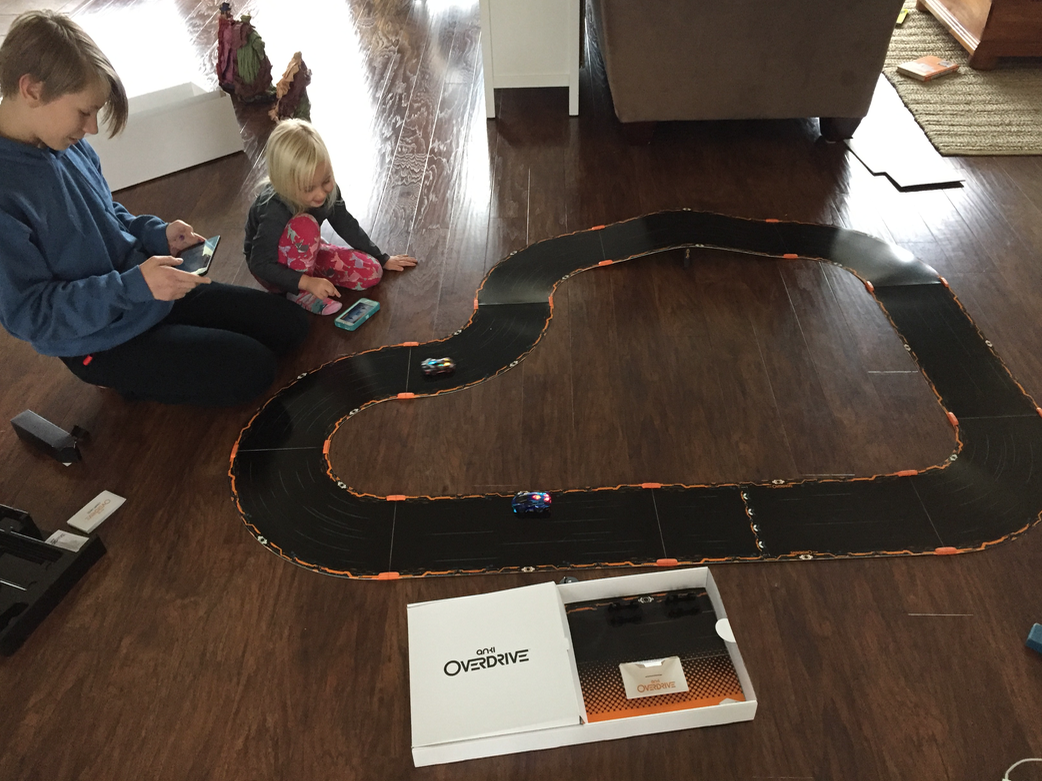 My 14-year-old racing my three-year-old.

It’s really neat because you can use your imagination to build a track and the cars will just go and scan the track so that you can play. It’s amazing that there are so many different weapons that your cars can get and use during battle. It’s also cool because you can select different modes for your car to compete so that you can unlock new weapons and attachments. You don’t only have to play by yourself; you can also play with other people who have the app. 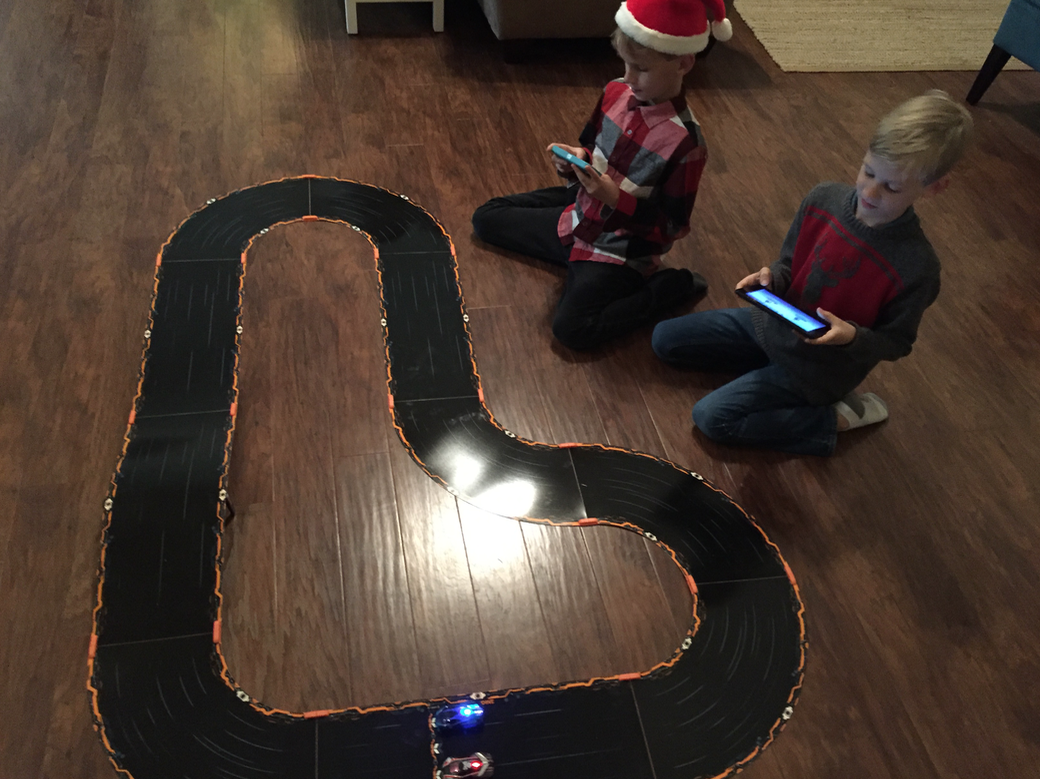 The 10-year-old racing the eight-year-old.

I think it’s cool because the cars scan the track so they can’t get knocked off. You can play different games, like King of the Hill and Battle, and there are weapons that you earn by winning those games. Sometimes different players have different abilities. After races, you get crates that have weapons or money that you can use to unlock different abilities. It’s pretty interesting. With the weapons, you can shoot the other car and it will get disabled for a few seconds. There are also stilts, so you can make bridges and tracks that go under the bridges. Sometimes it’s fun to knock the other car off the bridge.

I liked the part with my boys.

I think the three-year-old summed it up best! Anki OVERDRIVE is a game that the whole family enjoyed playing together. For more information, check out the Anki website.

I was provided with an Anki OVERDRIVE for the purpose of this review. No compensation was provided. All opinions are our own.