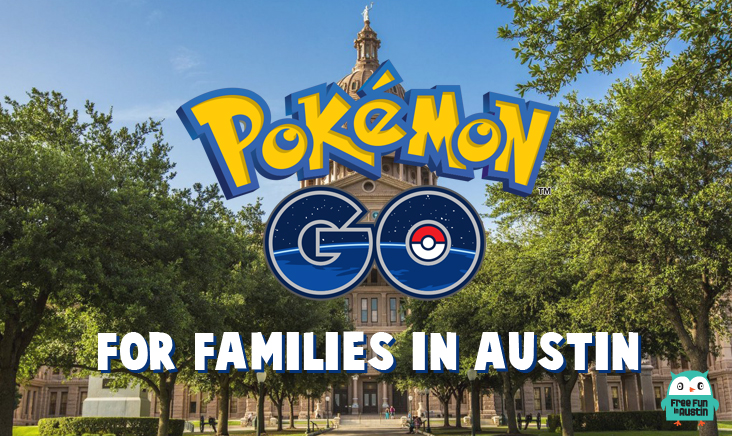 Pokémon Go is a fun, free way for families to explore Austin and spend time together – while getting a little exercise too. Whether you’re already playing or are wondering what all the fuss is about, let me help you get to know Pokémon Go and offer some tips for game play in Austin.

What is Pokémon Go? 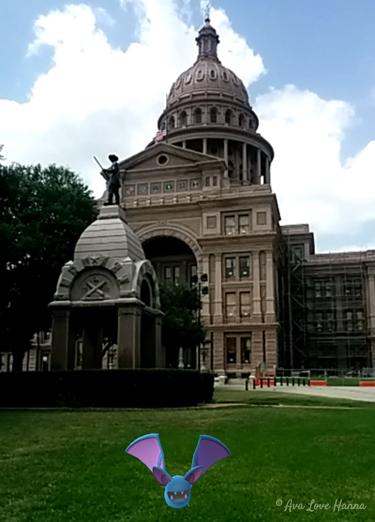 Pokémon Go is a free app for your smart phone that uses AR (augmented reality). When looking at your phone’s screen, an image from the game is super imposed onto your view of the real world bringing the game to life. The game uses your phone’s GPS and clock to determine where/when you are and will populate your map with Pokémon based on that information. Most characters tend to frequent areas that are the natural habitat for their creature type.

Near Lady Bird Lake at lunch? Get ready to catch some Magikarp. Hanging out at the Texas Capitol? Be on the lookout for Pikachu. Looking for a Clefairy? You’ll have to try at night. Oh, and FYI, Auditorium Shores is absolutely crawling with Charmander.

The goal of the game is to encourage the player to travel (mostly via foot) to catch all the Pokémon in the area. The result is a fun tour of the city and little bit of exercise. For more information and specific details about the game, visit the official Pokémon Go website. 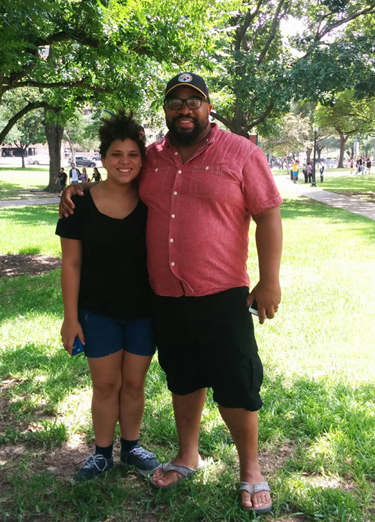 Trevor Bissell and his daughter, Bethany, at The Texas State Capitol.

When most people think about video games they envision a player sitting passively indoors. Pokémon Go then, is almost the anti-video game. It requires the player to be up walking and exploring his or her city. Most PokéStops are found in parks or at landmarks and the game rewards players for walking by providing them with eggs (often containing rare Pokémon) that can only be hatched by walking.

I’ll be honest with you, I’m not a big fan of summer. I dislike being hot and I burn easily, so I tend to spend the summer wasting away indoors. However, this past week my husband, son, and I have found ourselves out exploring many of Austin’s important landmarks and amazing parks and green spaces while playing. Was it still hot? Yes. But, I was having so much fun watching my son use the game’s map, clearly communicate which ways we should go, and seeing the excitement in his eyes when he succeeded at finding a Pokémon that was on his goal list, that I barely noticed the heat. 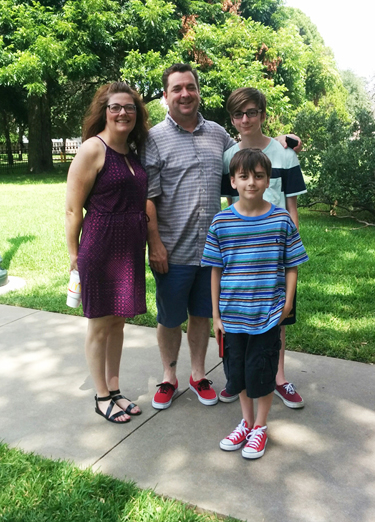 The Everett Family at The Texas State Capitol

We struck up conversations with strangers, spent time at historical landmarks that I kept meaning to get to but just hadn’t yet, walked miles in parks, and most importantly we talked – about the game, about where we were, about how much fun it was to spend time together.

All over Austin, families are playing. We spent Sunday afternoon chasing Pikachu on the Texas State Capitol lawn and met several families playing Pokémon Go together. If you’re looking for a free, fun way to spend some time with your kids, Pokémon Go is an excellent choice.

Since most of the best Pokemon hunting tends to be in parks, make sure to check out our park profiles and reviews to get an idea of the area before heading out. Many parents I spoke to are picking a new spot to visit and planning a Pokémon Go outing in that area for the day. Check out our favorite things to do in Austin for some ideas.

Like all games, when playing Pokémon Go, it’s important to play safely. Here are a few tips to keep in mind while you’re tracking down Pikachu:

So, whether you’re already a Level 12 and have your name on a gym or are just starting out, Pokémon Go is a great way to spend time with your family, get to know Austin a little better, get some exercise, and have a blast while doing it. Now, get out there and catch ‘em all!