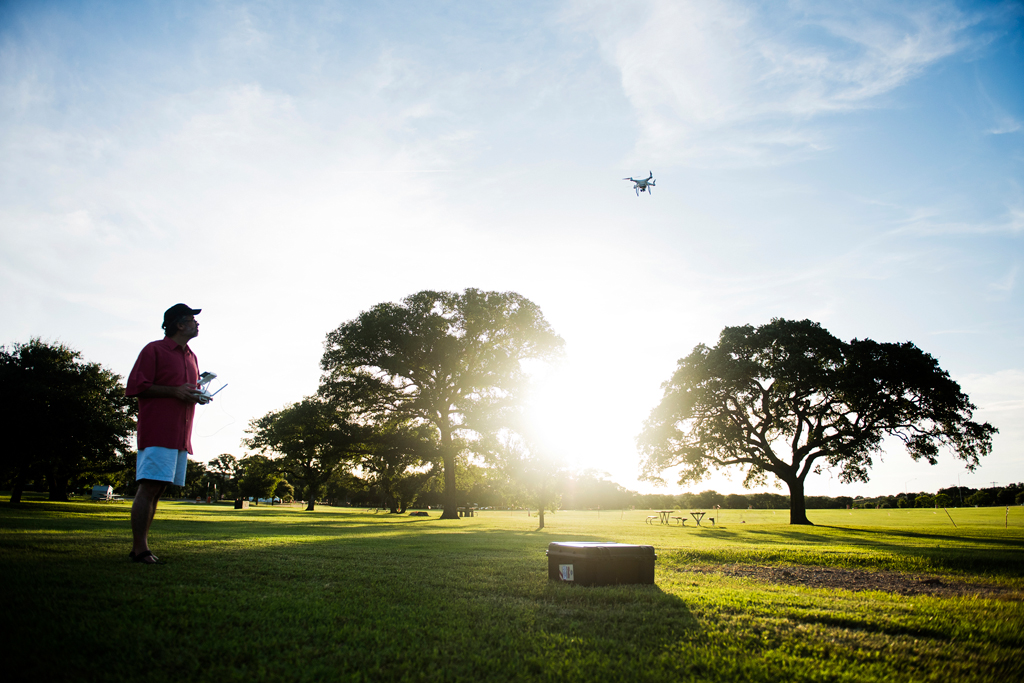 Meet The Drone Pilot Behind Those Absolutely Breathtaking ‘Over Austin’ Photos

Aerial drone photography has exploded in popularity since camera-wielding quadcopters first entered the consumer market. As beautiful and colorful as Austin is, it’s no surprise that many a hobbyist has flown his or her drone around in ATX airspace, capturing photos and videos from virtually never-before-seen heights and compositions. Remember the scary aerial footage of downtown’s Memorial Day flooding from DLR Productions? What about Charlie Kaye’s dreamy overview of Austin’s most iconic views and haunts? Both were filmed with camera drones. Chris Sherman of Over Austin.

And then, of course, there’s the field of a billion bluebonnets.

That gem was shot by Chris Sherman, a local drone photographer who has made it his mission to help Austinites fall more in love with home through his aerial photography and videography project Over Austin. Armed with his DJI Phantom 3 Professional quadcopter — which sounds like a beehive and packs quite the photographic punch with its 12 megapixel, 4K-shooting camera — Sherman frequents Austin’s parks and natural areas on most evenings to show viewers what Austin looks like from above.

An entrepreneur since 1994, Sherman founded local conference and specialized trade show company Engage Digital in 2003 and currently runs the business full-time. The company produces digital media-focused events throughout the U.S. and the U.K., such as Austin’s Tech Career Expo, which ran simultaneously with SXSW from 2012 to 2014.

When Sherman isn’t playing the winning CEO, you’ll most likely find him flying private airplanes, traveling, scuba diving, or creating beautiful imagery with his Nikon D600 DSLR camera or quadcopter in Austin and beyond.

“Being a private pilot, I think I have a sense of perspective that most of today’s aerial ‘drone’ photographers do not,” Sherman told Austin.com in an exclusive interview. “I’m looking for a view point that is unique. Either landscaping that cannot be fully appreciated from the ground, like Butler Park, unique architecture like the Capitol Building, the Frost Bank Tower, or the UT Tower, or something that just plays well with light. It’s also fun to shoot iconic Austin — like Hamilton Pool, the 360 Bridge, and bluebonnets at St. Edwards University — in unique ways.”

Sherman relocated to Austin in 2000 from San Francisco and has since become a rampant fan of ATX’s many natural areas, along with a few choice local businesses like Hopdoddy, Big Top Candy Shop, and most importantly, Alamo Drafthouse. He also loves Austin for its “very positive and very modern” attitude toward drone photography. Many quadcopter pilots are viewed with suspicion and even hostility by the public and law enforcement in most major cities, but Sherman hasn’t had any problems in ATX. On the contrary: He’s amassed an enthusiastic local following.

“I like to think that I’ve found a way for Austinites to re-discover their city and get to know it all over again from a fresh, new perspective,” Sherman concluded. “It’s not necessarily about being at a high altitude, but it’s about putting the flying camera somewhere you normally couldn’t put a regular camera.”

Want proof that Sherman is the real deal? Feast your eyes: You can swoon over hundreds more aerial photos and videos of Austin and even purchase prints on Sherman’s website and the Over Austin Facebook page. Or, if you’re more Twitter– or Instagram-inclined, you can follow him through those networks as well. Sherman often posts photos of Austin sunrises and sunsets on the very day that he captures them, so if you notice that the sky looks particularly dramatic while you’re stuck downtown in traffic sometime, be sure to check out his page(s) to see what you missed!