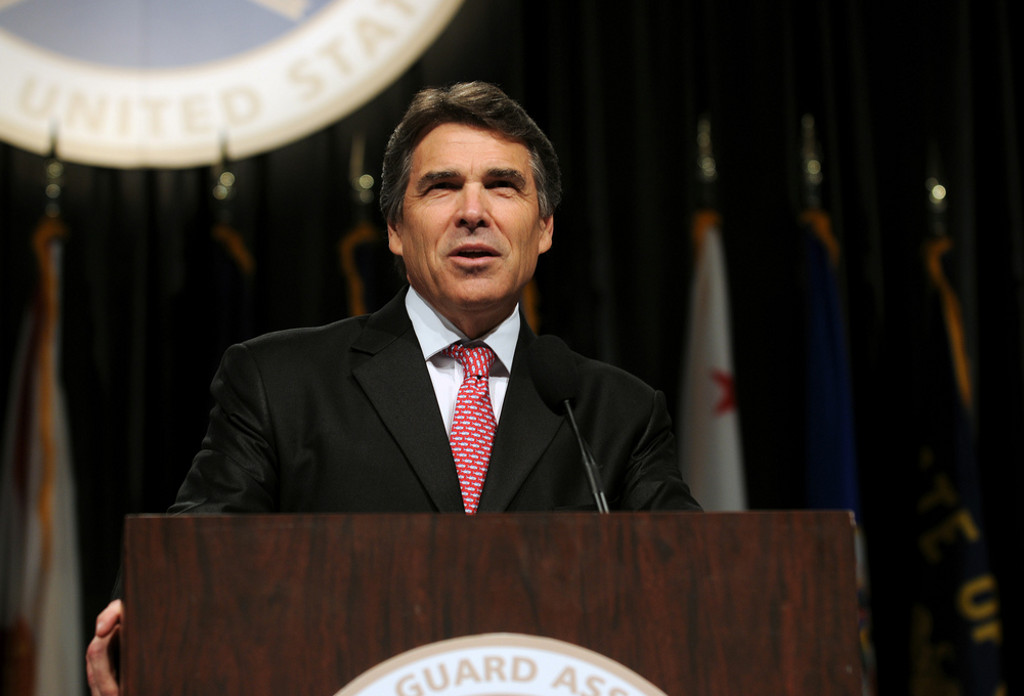 We all know that Texas politics is one hell of a sticky wicket, but this is just getting silly.

Rick Perry, the forgetful governor of Texas whose frequent comedy routines have amused and enraged us here in Austin for longer than any previous holder of the office, decided this week that he’s not going to be here when President Barack Obama comes to town on Wednesday for a couple of fundraisers, including a stop at Robert Rodriguez’s home.

But not only did he skip town: According to The Associated Press, Perry went all the way to the Texas-Mexico border and demanded a high-noon showdown with the president. Perry told Obama that he wants what Austin NBC affiliate KXAN called a “substantive meeting” about the “crisis” on the border, and not “a quick handshake on the tarmac.”

Perry’s decision to bolt for the border was noted in a letter sent to Obama on Monday, less than 24 hours after he was off in the middle of a conspiracy rant on ABC News about how Obama has somehow teamed up with the hundreds of thousands of undocumented immigrants he’s deported, which would obviously (?) make it impossible for Republicans to ever get elected again.

“We either have an incredibly inept administration, or they’re in on this somehow or another,” Perry said Sunday. “I mean, I hate to be conspiratorial, but I mean, how do you move that many people from Central America across Mexico and then into the United States without there being a fairly coordinated effort?”

If you’re not a Texan, don’t worry: Perry did not suffer a stroke. In fact, our fearless leader makes odd comments all the time. So did the last guy. Remember him? So, yeah, we’re used to it.

It’s probably appropriate to note here that immigration from Mexico into the U.S. hit “net zero” in 2012 — meaning just as many people are returning as there are coming to the states. But it’s easier to blame Obama for a problem that’s older than anyone alive today than to discuss, you know, nuanced facts and figures.

Despite Perry’s comments on ABC, Obama’s people replied Monday with an offer to meet with him in Dallas. That too was not good enough for the guv, so the “scheduling conflict” (ahem) suddenly became a local news item. That, of course, led to a priceless debate segment on MyFoxAustin last night:

In typical fashion, Obama ultimately gave in to Republican demands, but he only went half way. Instead of agreeing to meet with Perry for a high-noon border showdown, KXAN reports that he added a round-table discussion on border and immigration issues to his schedule of events in Dallas.

It’s not clear whether the governor will attend. And after just two days of political pearl clutching, Perry says he’ll meet Obama in Dallas after all.
——