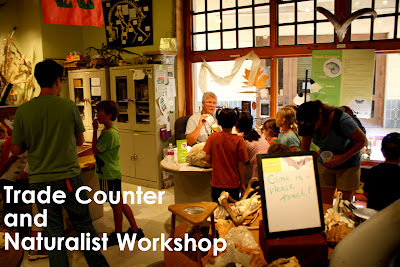 Austin Free Forest School is a free, cooperative, parent-run group for children age 0 to 6 that meets throughout the year in wilderness areas around Austin, Texas. Earlier this week, Addie took her son to check it out! 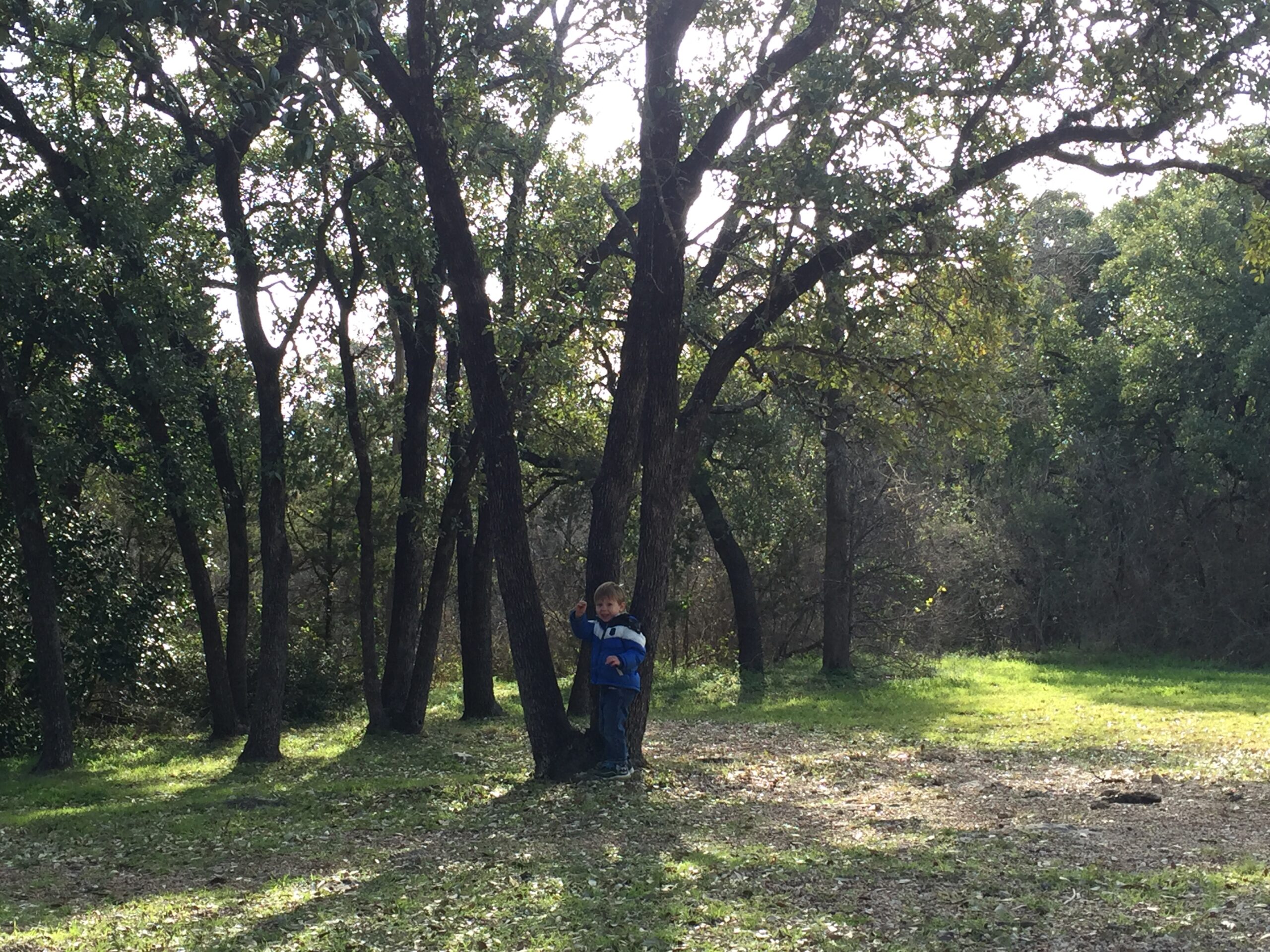 My three-year-old and I spent Wednesday morning at the Austin Free Forest School. We had such a great time! The group is a child-led, drop-in morning preschool group for parents to enjoy with their children, at a different outdoor location each day. Wednesday morning we met at the Balcones District Park.

There was a wide-range of ages enjoying the outing, from babies to five-year-olds, and their parents. There was some structure, such as group singing and story time, but the majority of the morning was spent being curious and scouting the outdoors, with the kids taking the lead on what to do next. Sometimes they hiked, other times they played and explored at the designated “base camp.” 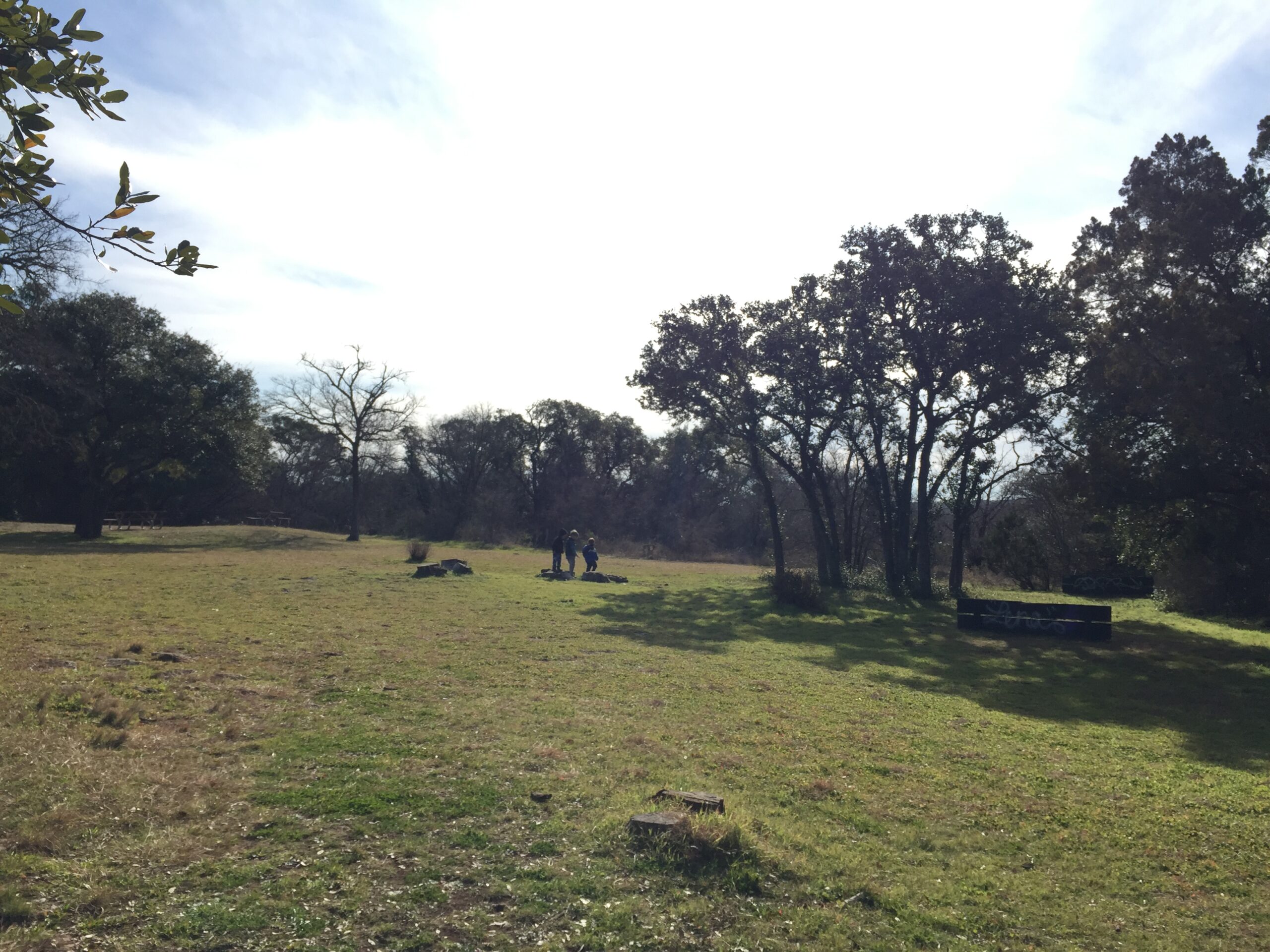 Checking out the base camp.

Parents were encouraged to step back and do less, giving the kids more freedom to play and learn at their own speed. A few of the other parents and I rejoiced, joking that we were actually sick of hearing our own voices sometimes! It was refreshing to slow down and let the kids do their own thing while the parents didn’t try to stop them, or hurry them along, or intervene much at all. The kids were able to figure out how to work, play, and learn together while the parents (mostly) kicked back and watched. 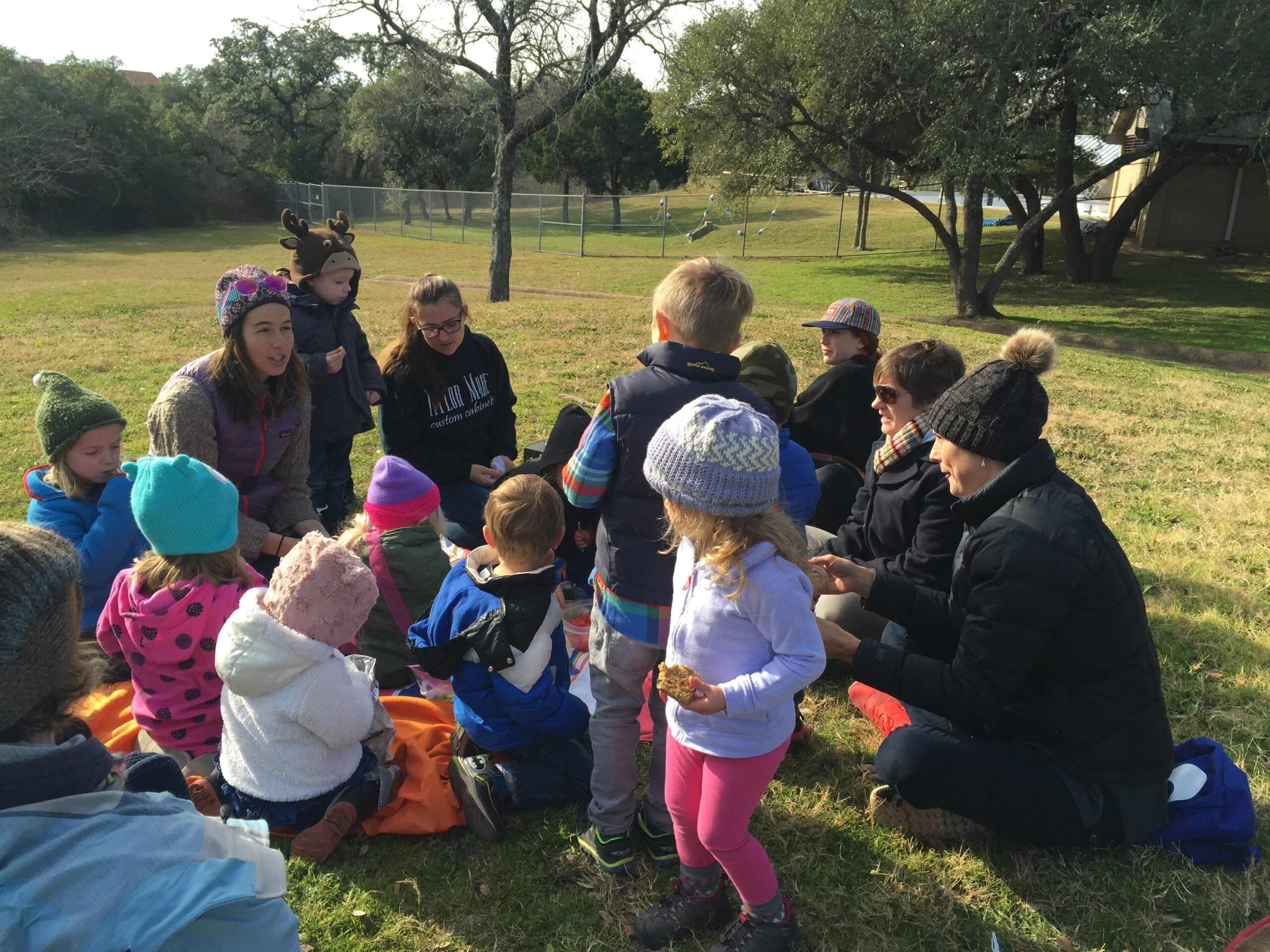 On this brisk morning, the kids were focused on hunting and gathering sticks and other treasures they found in the forest. They dug a hole in the sand and filled it with the treasures they found. They all worked together and had so much fun that the only way they were willing to stop was when their tummies told them it was time for lunch and snacks! After the free play, we gathered around for a circle time, where we sang songs and listened to a story. It felt really good to play outside in nature! 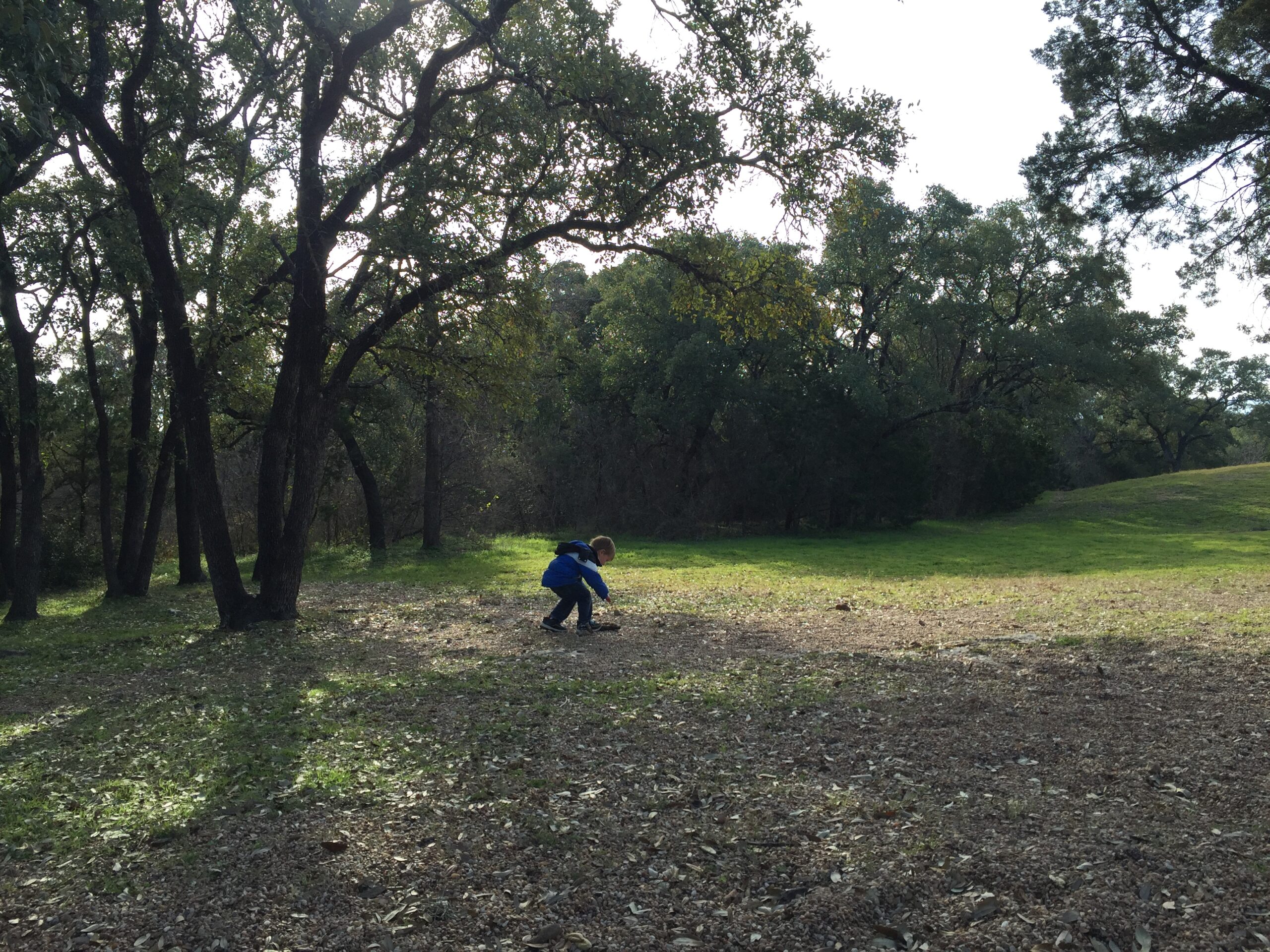 On mornings where the kids want to lead a hike, they are encouraged to stop and inspect different things along the way, like berries or leaves or animals (and even droppings!). The leader pulls out an information card so they can learn about what they see as they go along. Learning is incorporated in a very organic way, as the group of children determines what they will be learning about as they explore.

The kids were having fun and seemed unaware that they were developing social skills, motor skills, communication skills, and a sense of wonder. But it was obvious to see, as I stood back and observed. The parents also spend time exploring with the kids, fielding questions, pointing out things to them like rings on a tree stump or how to use a compass, and asking them to describe what they observe. 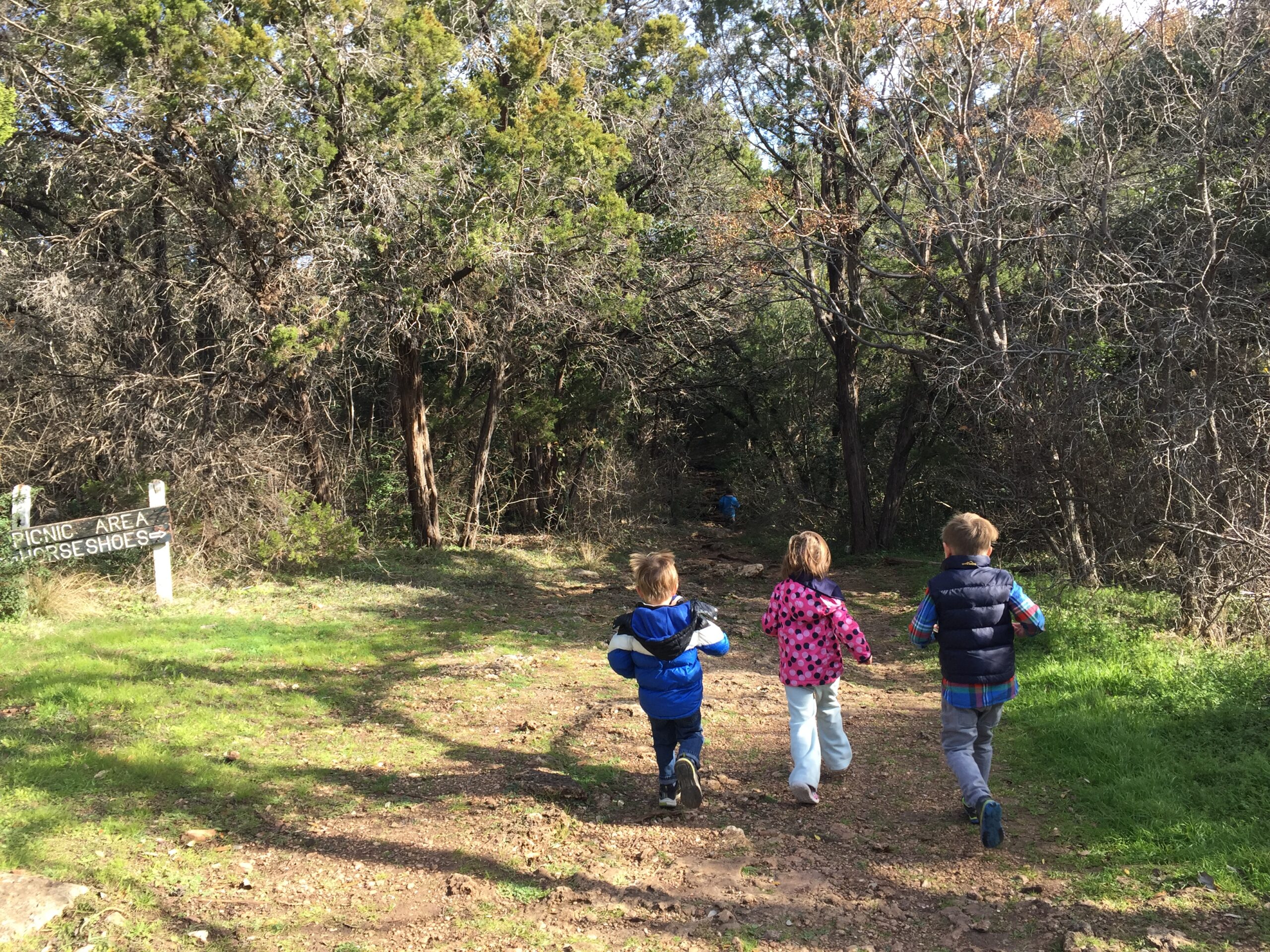 A sense of community is established right from the get-go, as a potluck snack is shared and everyone introduces themselves to the group. Then the children lead the way to the “base-camp”, making sure to follow the rules and stay within a safe distance (close enough so that they can see one of the parents and that the parents can see them as well). 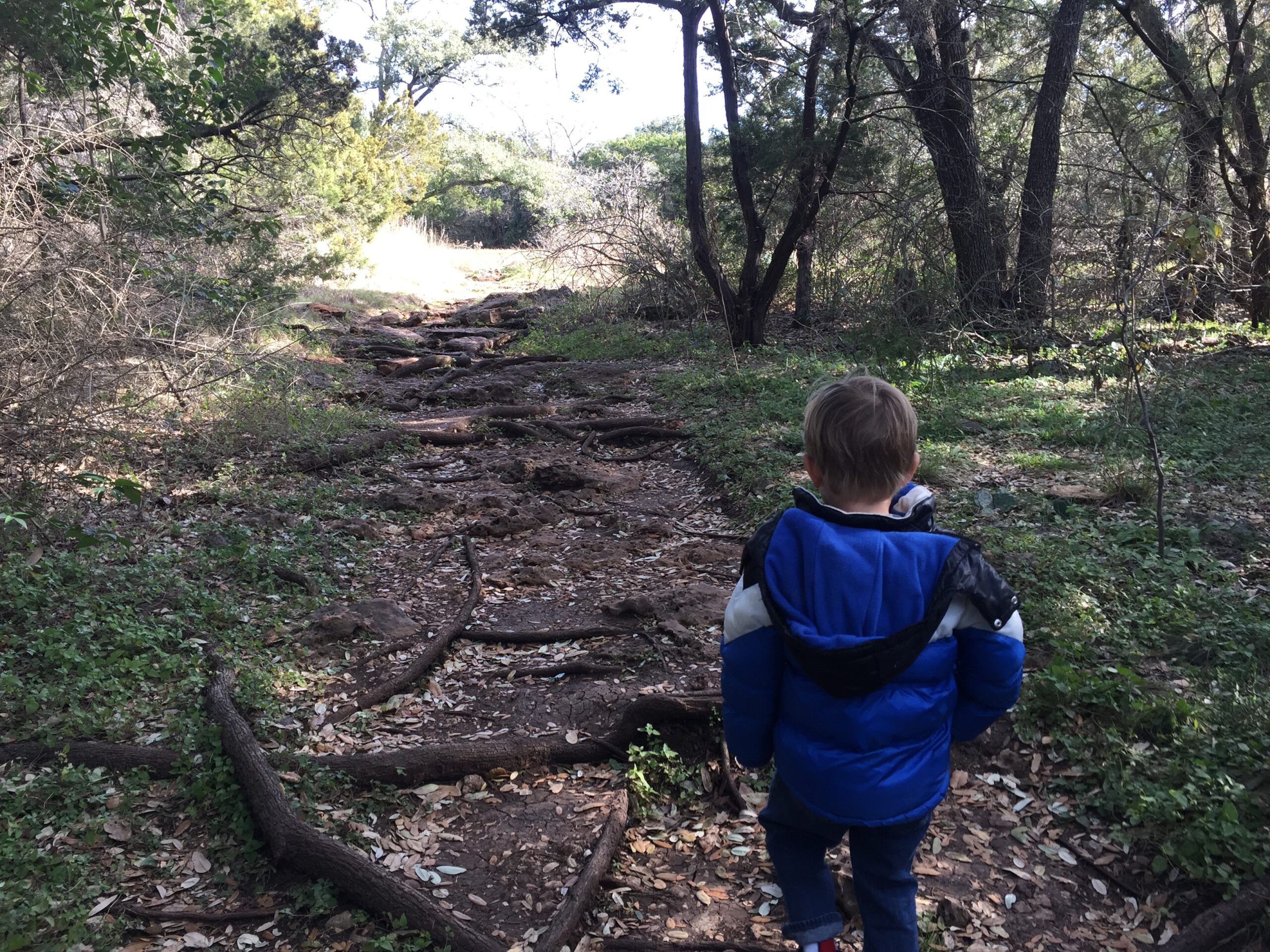 Once the “base-camp” is established, the kids are free to roam and play and explore. It takes a little while for everyone to find what they want to do, but eventually everyone is quite busy! Then the little explorers might choose to go on a hike, or the play could just continue the entire time at the “base-camp” until it’s circle time. 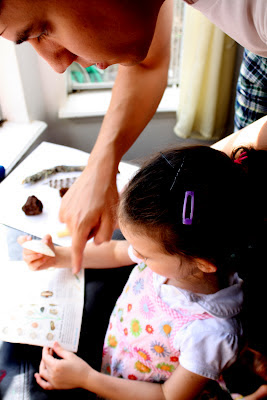 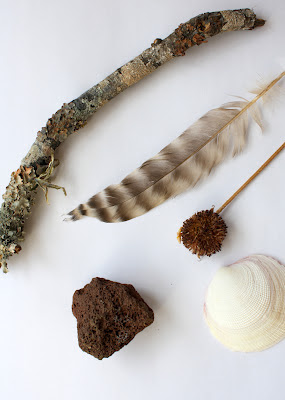 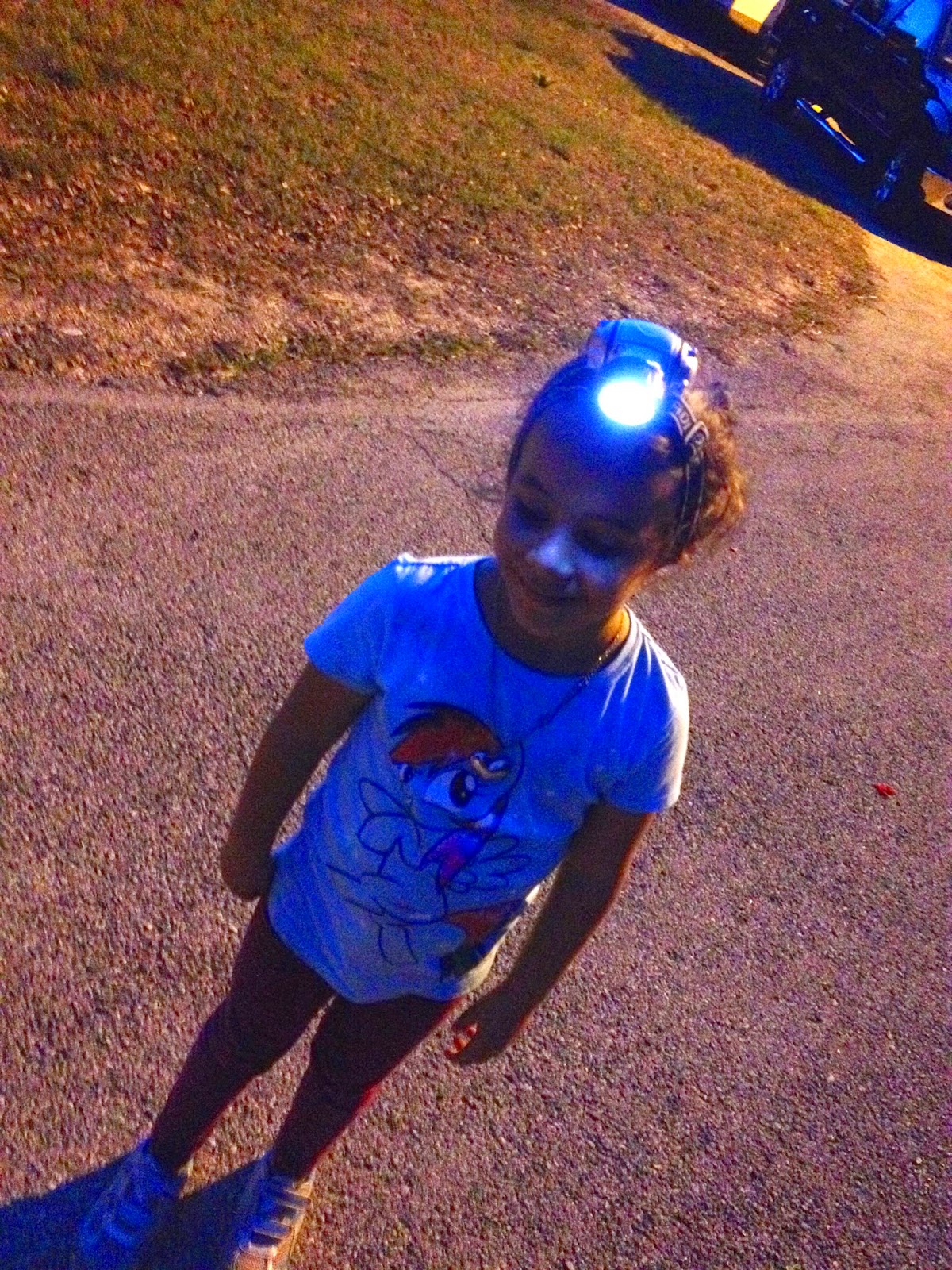 The kids used binoculars and compasses while adventuring 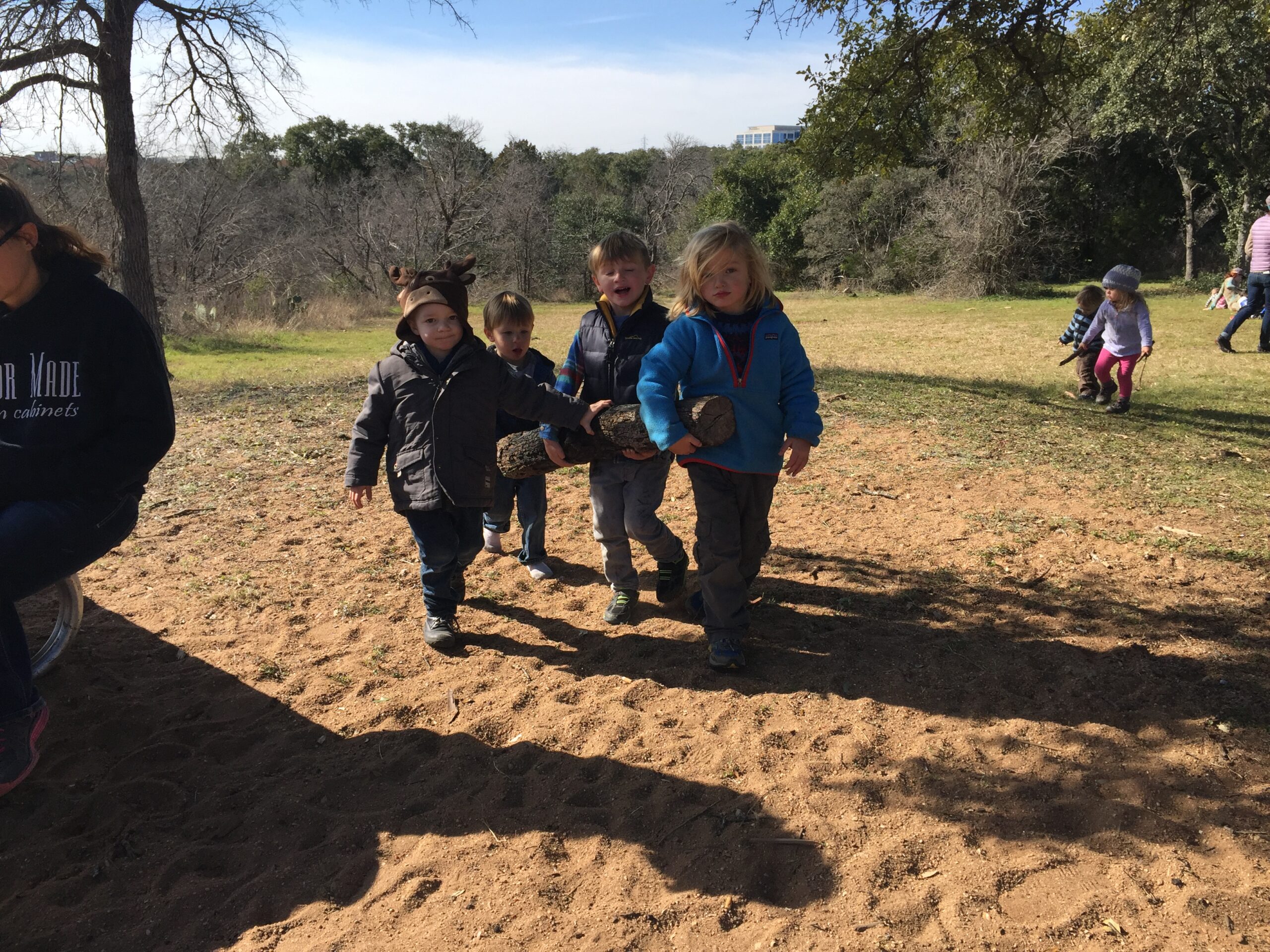 The pile of what was collected. Who doesn’t love a good pile? 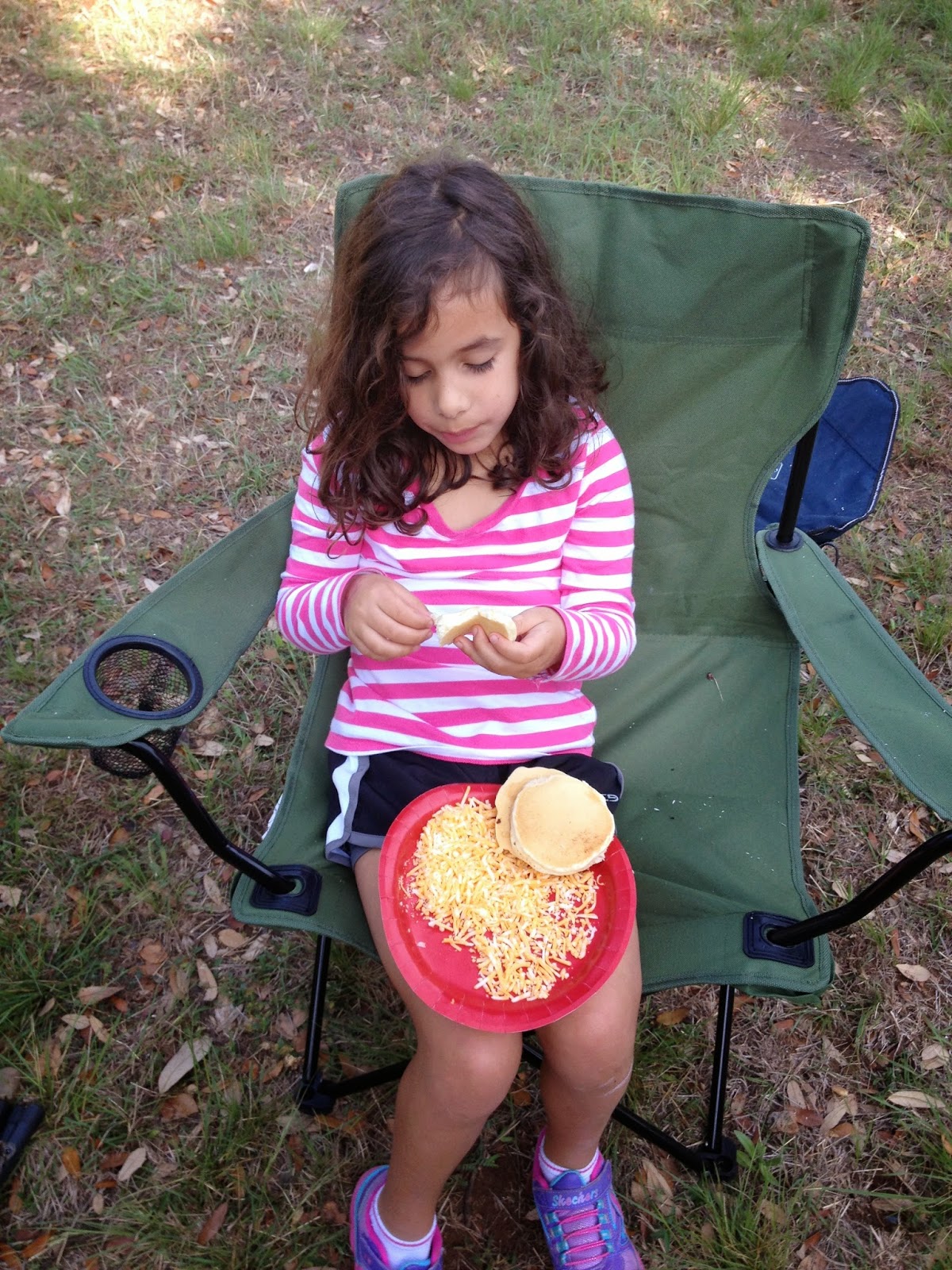 Ring the bell for circle time!

It’s not easy to gather everyone and stop the play, but hungry little tummies are willing to gather around for snacks. With kids in laps, songs are sung, snacks are munched, and stories are read. Everyone is welcome to stay, eat, and hang out, or you can leave whenever you’d like! It was one of the most pleasant mornings I’ve had in a long time. 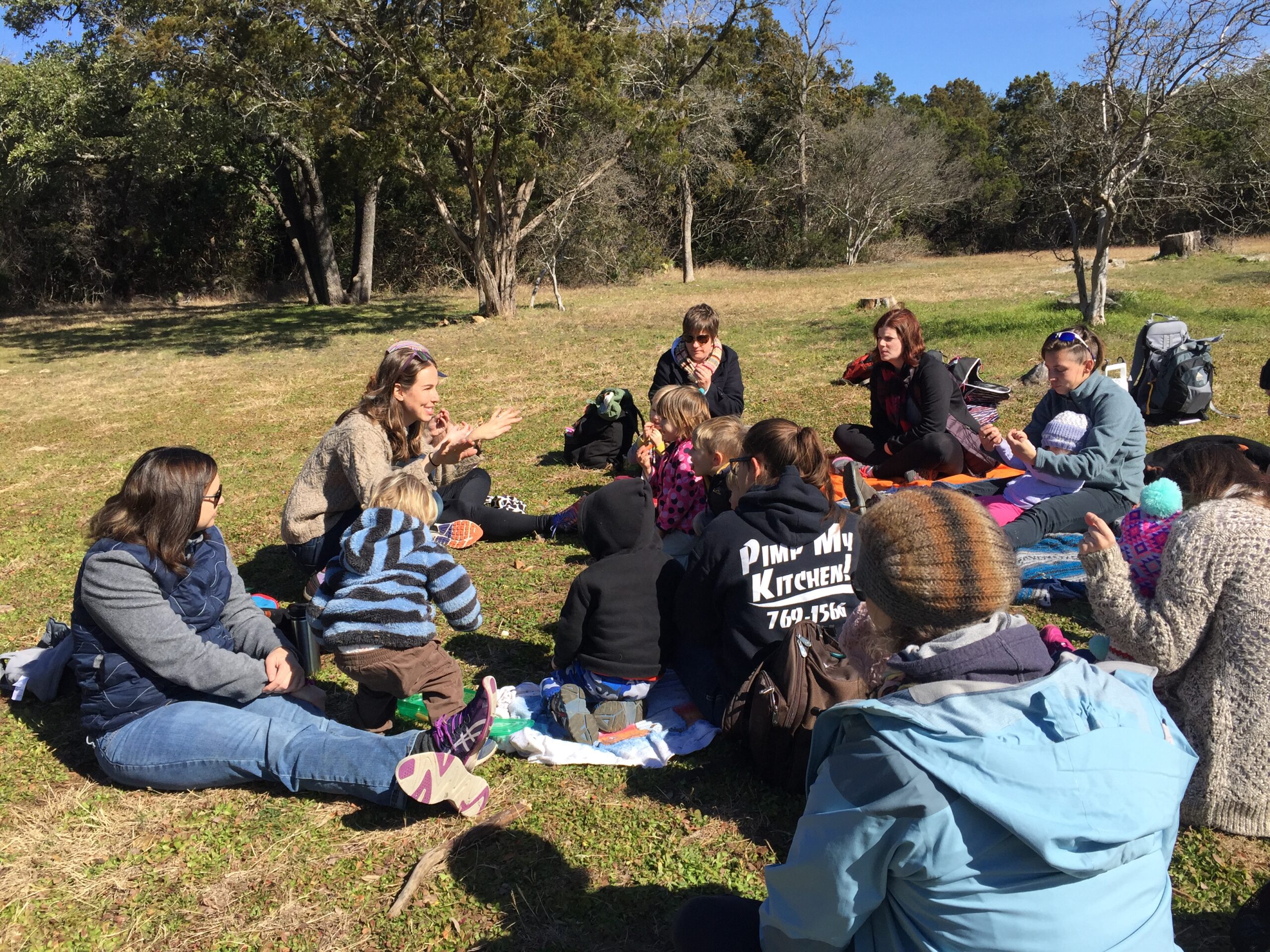 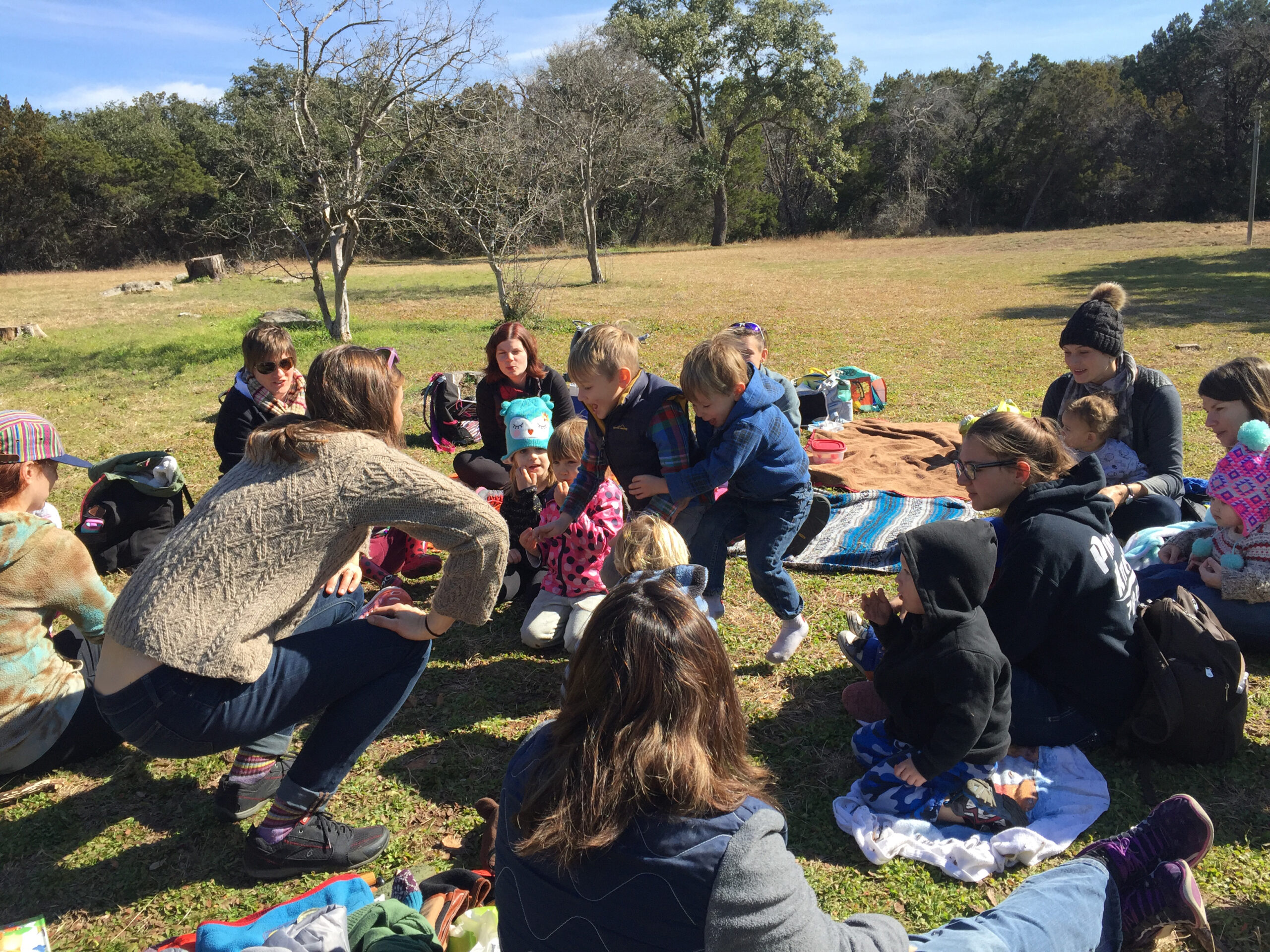 Pretending to be frogs!

If you’re interested in trying out this free preschool, request to join the Facebook group for more information. You will need to sign a waiver and find out information for each morning’s adventure (which location, what to bring, etc.). Make sure you dress appropriately for the weather, bring a potluck snack to share, and be prepared to get dirty!