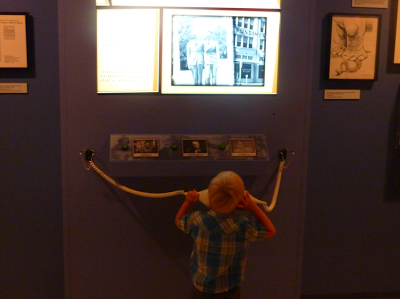 Our Morning at Alamo Kids’ Camp

This morning I had the incredibly rare opportunity to spend a few hours with just one of my children, while the other three were off enjoying summer fun elsewhere.  My ten-year-old son and I got to go on a date!  We headed to Alamo Drafthouse Village bright and early for the 9:45 free screening of The Secret of Nimh.  We were running late, as usual, and arrived at 9:35 a.m.


I was a bit nervous that we wouldn’t get a seat since Tuesday is Baby Day*, when all ages are invited to attend the free Alamo Kids’ Camp movies (on other days children must be at least 3 years old).  But, we got tickets, flew into the theater and… saw that we were the first to arrive.  Even our server seemed taken aback by the lack of audience, saying that Alamo Kids’ Camp usually does sell out.  I guess Austinites aren’t fond of early morning show times.


A few other families trickled in as the movie was starting, so we didn’t end up having a private screening.  But our food came super fast!  Yes… we did order lunch before 10 a.m.  Is that bad?  I had planned to head to Freebirds after the movie, where kids eat free on Mondays and Tuesdays**, but I was powerless to resist Alamo’s Moonstruck (Margherita) pizza.


We had a lovely morning out and I enjoyed seeing a movie with my son that I last saw when I was in elementary school.  The Secret of Nimh will be at Alamo Village for another two days, starting a bit later in the morning, if you’re interested.  Or, you can check out the complete Alamo Kids’ Camp schedule here.  I recommend clicking on the title of the movie you would like to see, to double check the show times on the movie page. Also, not listed on the main schedule are these free movies for kids from “The Summer of 1982” series: The Dark Crystal and The Last Unicorn.


All Alamo Kids’ Camp screenings are free and tickets are distributed on a first come, first served basis.  Tickets to the later show times likely go faster, so you probably don’t want to cut it as close as we did. Others have recommended that arriving at least 20 minutes early is a good plan.  Cartoons play on the big screen while you wait for the main movie to begin.


*Baby day is only on Tuesdays at the Alamo Village, Alamo South Lamar, and Alamo Lake Creek and Alamo Slaughter.  You can find details here.


**Kids eat free at Freebirds on Mondays and Tuesdays, with the purchase of an adult entrée.  This is a limited time promotion (I called today and was told that they aren’t sure how long it will continue).  You may want to give a call to verify the promotion is still running before heading over there.  You find more information here.


Want more free and $1 movie options?  Here is the round-up for this week!