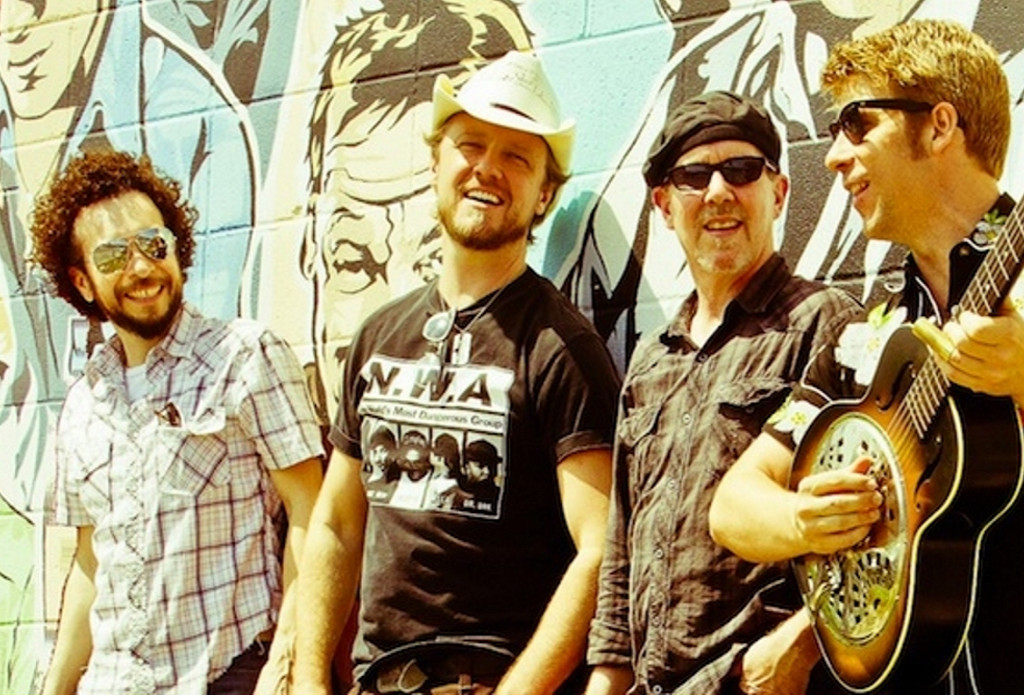 In the past year, many bands have rediscovered the virtues of the truly great music of the late 60s and 70s. There are only a few bands who truly understand and embrace the funk, grit, and grooves of great Rock bands like Little Feat, the Allman Brothers, and Marshall Tucker. Formed in 2011, The South Austin Moonlighters are a group that takes the Southern and roots rock genres and perfects them, infusing them with a beautiful fusion of funk and soul.  Since the release of their first CD “Burn & Shine,” The Moonlighters have played SXSW, been featured in Texas Music Magazine, and played on Good Day Austin.

It’s not surprising that this group is already shining bright on Austin’s music scene.  All four members are veterans of some of this city’s most beloved bands. Josh Zee of The Whiskey Sisters and The Mother Truckers is one of the best guitar players in Austin and this band gives him a real chance to let his incendiary playing fly. Lonnie Trevino Jr., also of The Whiskey Sisters, was just voted #4 in the Austin Chronicle’s Top 10 Bassists of 2014.

As great as they are on disc, they are sublime live.  Trevino has the perfect voice for this kind of music, with a deep tone that echoes the vocals of Lowell George of Little Feat, especially on tracks like “Found My Way Back.” Guitarist Phil Hurley also sounds like he could be playing with the Allman Brothers at their peak.  Drummer Phil Bass has a jazz sensibility that lends a richness and complexity to the band. These musicians are truly from another time, in the best way possible. And this is not just another Southern Rock influenced band. Their understanding of 60s rock, 70s funk, and 80s soul makes them a multi-layered and unique foursome.

The Moonlighters shows are among some of the most energetic and exciting in town right now. Since their recent CD release, which was filmed live at the Saxon Pub, Trevino showed that he is a consummate front man with the charisma and rich vocals of a singer like Toy Caldwell of Marshall Tucker. “Moonlight Ride” showcases his vocals at their best. This is get-in-your-truck and blast down the highway music.

As Trevino quipped during one show, “ I can recall when there were ten people in the audience at our first gig.” With talent like this, the South Austin Moonlighters no longer have this problem.  Their shows in March and April have been packed and their CD is garnering excellent reviews.   The South Austin Moonlighters will be taking their act on the road to Marble Falls, Dallas, and the historic Gruene Hall in New Braunfels, TX. They will be back at The Saxon Pub in Austin on May 2nd at 9PM. Their CD, “Burn & Shine” is available at Waterloo Records. This is a band that is made to be seen and heard live, so be sure to check out their next show.