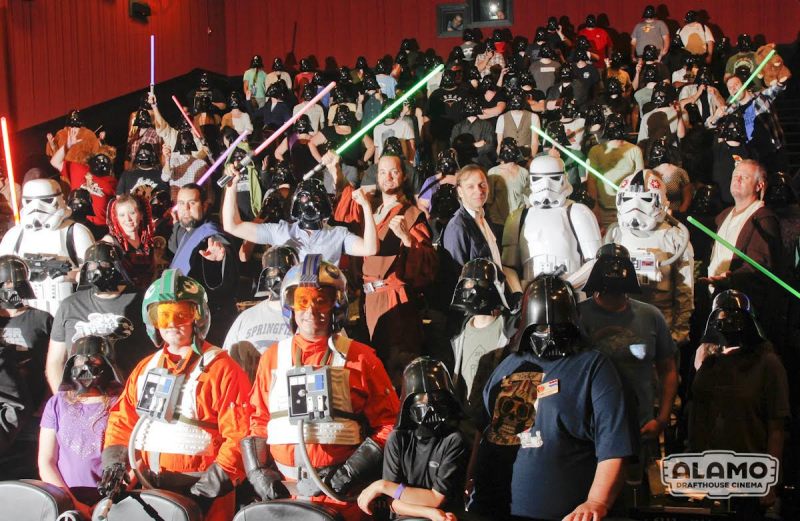 May the 4th Be With You: Our Favorite Past and Future Star Wars Events in Austin

It’s that time of the year — when Star Wars nerds are even more justified in pulling out ridiculous memes and jokes and the hardcore among us hit the tattoo parlors for some force-inspired ink. Austin has seen its fair share of Star Wars fandom, so we figured we relive some of our favorite moments, as well as tune you into a few upcoming events.

When Disney brought a First Order TIE Fighter to SXSW, subsequently followed by a storm trooper “getting arrested” by an APD officer.

That brilliant Internet moment when someone turned this local road rage incident into a lightsaber battle.

When the 501st Legion walked into the premiere of The Force Awakens all scary and awesome at Alamo Drafthouse South Lamar. From their YouTube video: “The 501st Legion is a national group of Star Wars enthusiasts who build detailed recreations of costumes from the film to wear at charity and community events. Local battalion members were at The Force Awakens premiere at Alamo Drafthouse.”

Every time that Ray Park aka Darth Maul hosted a panel at Wizard World Comic Con in Austin. Every time he came as part of the con he was charming and told the best stories, but 2012 was a special year. A 20-year-old in the audience asked him to show off some moves, and Park gladly obliged.

That one time Jim Braden cut through the competition to watch 46 hours of Star Wars nonstop at Alamo Drafthouse. Braden watched the two trilogies, the Star Wars Holiday Special, and nine screenings of The Force Awakens to win a seven year pass to Alamo Drafthouse.

Oh and let’s not forget Snowpocalypse in 2014 when CJ Morgan and Nicole Raney compared Austin to Hoth in these sweet Photoshop images. To make new memories of Star Wars in Austin, here are a few upcoming events:

If you’re looking to make your Star Wars Day extra memorable, go hang out with some other fans at The Other Worlds Sci Fi Film Festival party at North Door, complete with costume contest, memorabilia, and a dance party featuring DJ Boba Fett. They’re also screening a few original Star Wars fan films, and Fifth Dimension Books is giving rides on their bus. All free!

The Star Wars fans over at Star Bar will be screening the movies all day on their TVs, selling special edition shirts, and will have tap specials including Ballast Point Sculpin IPA’s, Avery and Deschutes.

Barnes and Noble is celebrating all things Star Wars and teaching teens to play Star Wars: X-Wing starting at 6:30 at the Arboretum location. If you want to bring out your creative side instead of your dark side this Star Wars Day you can head to Cedar Park for Painting with a Twist’s special Star Wars painting session from 7-9pm. It’s BYOB and $35 for the session-be sure to register to save your spot. If you’re not into painting, Art for the People Gallery and Slavonk and Hortus are hosting a Star Wars Terrarium making night from 6:30-8pm. Tickets are $55 and include supplies, bites, and wine.

And if you can manage to wait this long, Chaparral Ice is hosting a Star Wars themed production on ice on May 20 & 21. So basically, Disney on Ice.

For more mature tastes, Austin Symphony is hosting The Music of John Williams June 11-12 as part of its Sarah & Ernest Butler Pops Series. Though Williams will not be in attendance, the Austin Symphony will do a great job bringing to life music from Star Wars, Jurassic Park, and Superman, among others. Tickets are available starting May 10.