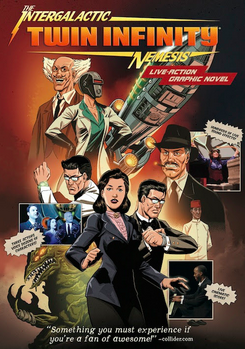 The Austin Public Library will be hosting a sneak peek performance of Jason Neulander’s Intergalactic Nemesis: Twin Infinity, a live action graphic novel, on Sunday, August 24, 2014 at 3 p.m. at the Faulk Central Library. The Intergalactic Nemesis series is an Austin original which includes a radio play, comic book and the live-action graphic novel which is a mash-up of the play and books. The event is free and open to the public.

Three actors voice the dozens of characters, a Foley artist creates all the sound effects, and a pianist plays a cinematic score, while more than 1,250 individual full-color hi-res comic book panels tell a hilarious sci-fi adventure story visually from an enormous movie screen. And it’s all done live in front of your eyes. After this sneak peek performance the creators and crew will be answering questions from the audience.

The Story Thus Far…
The year is 1933. Pulitzer Prize-winning reporter Molly Sloan and her intrepid research assistant Timmy Mendez team up with a mysterious librarian from Flagstaff, Arizona, named Ben Wilcott. Together, they travel from Romania to Scotland, across Europe to North Africa, then to the Robot Planet (in the Effdillinplitzenpire Galaxy) and finally to Imperial Zygon to face the most terrible threat humanity has ever known: an invading force of sludge-monsters from outer space known as the Zygonians.

This sneak peek performance anticipates the September premiere of the third Intergalactic segment, Twin Infinity. Audience members do not have to have seen the first two installments to pick up with the third. The story stands alone. No previous Intergalactic experience necessary.