Improv for Kids and Teens with Move Your Tale

Have your kids experienced Move Your Tale’s What’s the Story Steve? yet? If not, they should, and I’ll tell you why. Think back for a moment to the fun of huddling with friends around one of those little Mad Libs tablets in your youth. Now add a stage, six adult improvisors, and a theater full of kids with rich imaginations. Sometimes a comedic masterpiece unfolds before your eyes. Other times it’s simply a whole lot of silliness. You can never predict the outcome but you know, reliably, that it’s going to be a great time every time. What’s the Story Steve? is a lot like that…with a poodle. 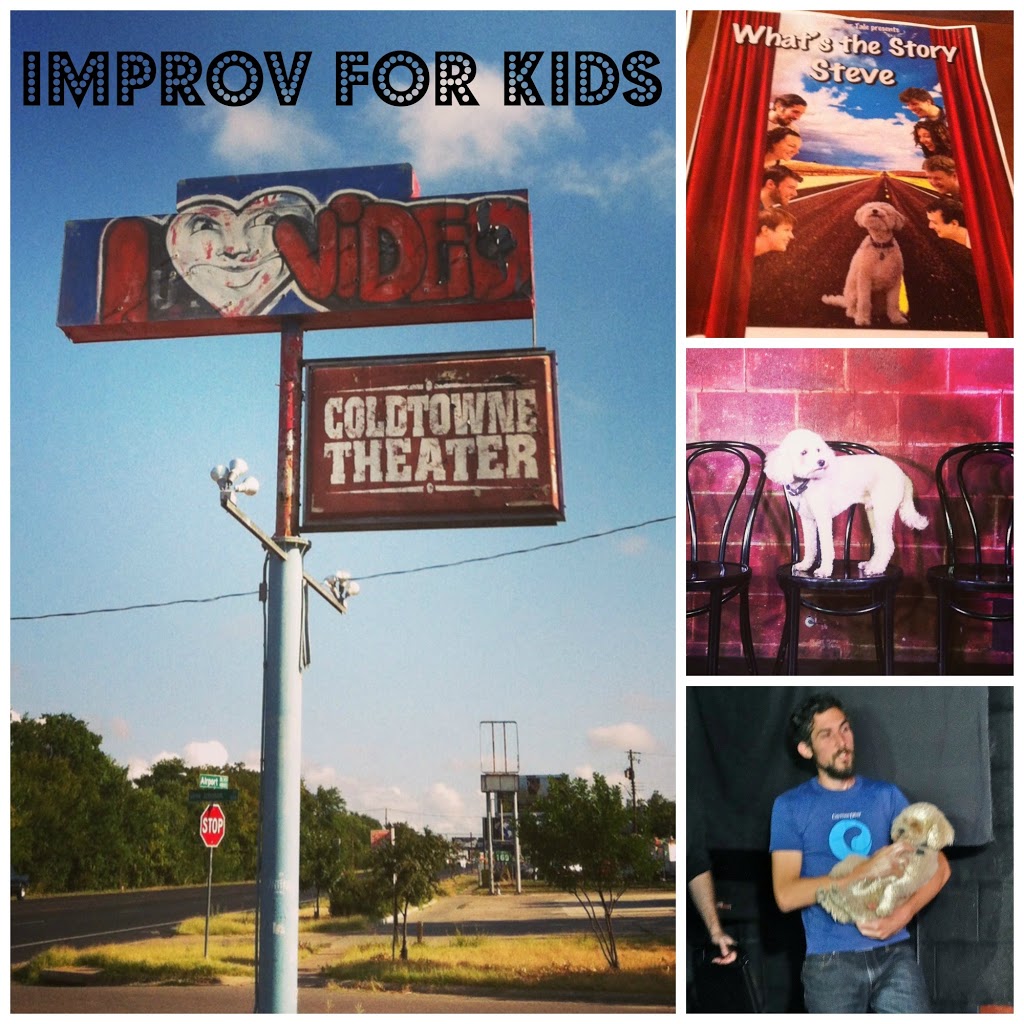 The first time my family ventured to ColdTowne Theater for the Saturday morning show, it was at the urging of our friend, Chris, who happens to be one of the adult improvisors. My then five-year-old son was initially overwhelmed by the whole scene: unfamiliar locale, dark room, new people. Not even Chris’ familiar face on the stage could prompt him to volunteer his ideas for the show. It became clear that several audience members were regulars, waggling their hands eagerly and being called on by name.

As things really got rolling, though, Kristin Henn — emcee, improv guru and founder of Move Your Tale — made a point of reaching out to the less vocal kids in the audience. And then it happened. She looked directly at my son, who was sitting on his hands, or maybe even using them to hide his face, and asked him to contribute the name of a city. He blushed. He squirmed. And, finally, after the crickets stopped chirping, he mumbled, “I dunno.” And here’s where the collaborative storytelling magic happened…Kristin and her team worked that “I dunno” into the show as if it were the most brilliant answer they’d ever heard. My son relaxed the instant he realized he was in an environment where any answer would be the right answer and, just like that, he was hooked on improv. By the end of the show, he was on stage doing his best impersonation of a broken water pipe in the newly constructed palace of Her Royal Highness the Queen of I Dunno.

Magic, I tell you. 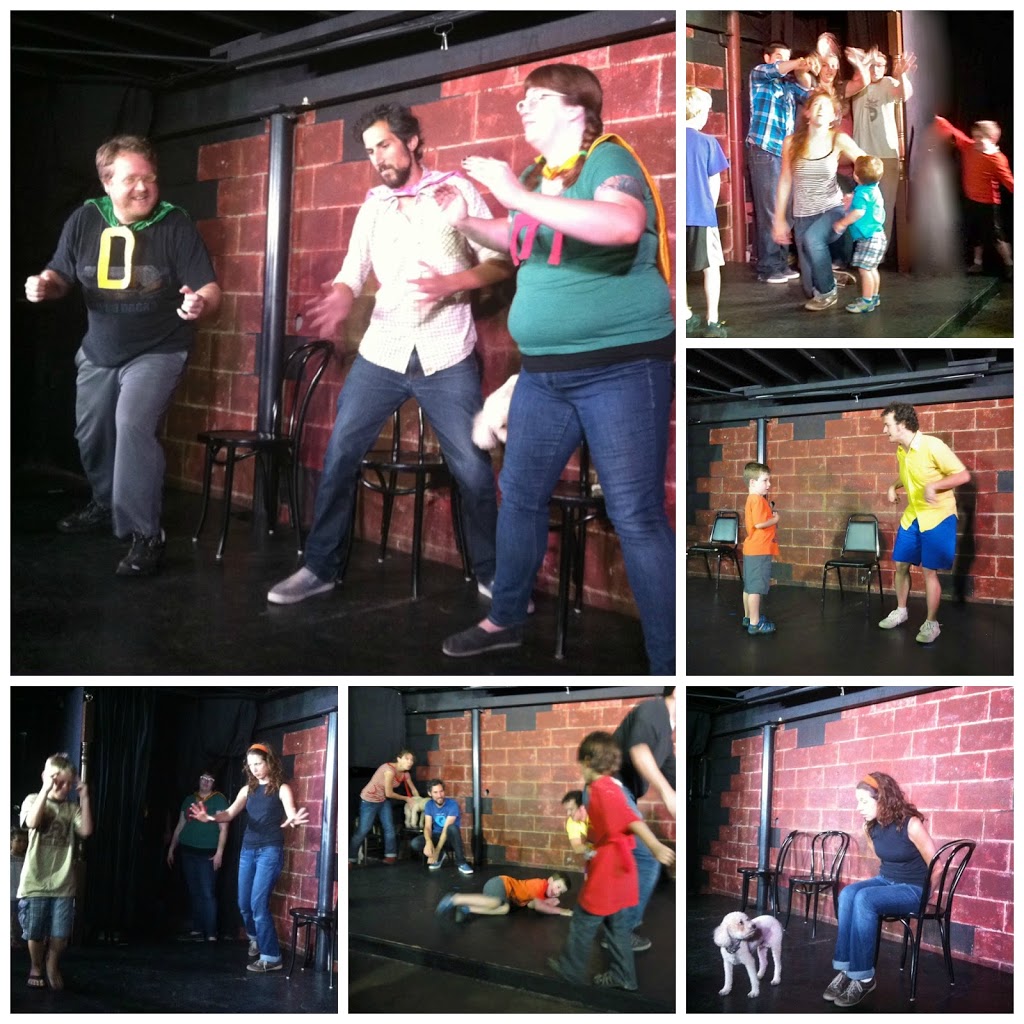 But WTSS? isn’t all that Move Your Tale has to offer. According to moveyourtale.com, Kristin founded MYT in 2007 “as a resource for families and youth with an interest in storytelling, improvisation and performance.” She achieves that goal through an ever-expanding range of classes and camps, in addition to Saturday morning and Sunday evening shows.

My now six-year-old has participated in a one-day Spring Break camp, a week-long summer camp, and he’s chomping at the bit to start an after-school class next week. In the course of attending WTSS? and these camps he’s gained self assurance, an improved sense of comedic timing, and some much-needed help discerning what’s funny and what’s not (though that’s still a work in progress). He’s participated in both long form and short form improv. He’s learned some great games (Alien Interview, anyone?). He’s gotten a bit of experience in costume design and prop management. He’s shared the stage with some incredibly entertaining and supportive adult improvisors, as well as some super talented kiddos. Most valuably, my super-imaginative little guy has learned that creativity doesn’t have to be a solo endeavor.

Does improv sound like a good fit for your creative genius? Move Your Tale offers several classes for ages 3-18. Registration for fall classes is going on now!

And even better news?

Free Fun in Austin readers can save $20 off the cost of any class listed below!

Leaping Legends is Creative Drama at its best. Guided by their instructor, children explore storytelling and improv basics, creating awesome characters and amazing tales at a moments notice. Physical, fun and fantastic! 8-week sessions, try a free class on September 12th or 13th. Session officially begins September 19th/20th. Parents and younger siblings may wait in the lobby or leave us with contact information and go. Very quiet parents may watch the class from the hallway. 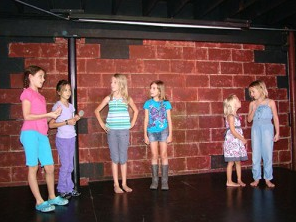 High energy improv games and scenes allow students to explore creating characters and stories in the moment. Challenging, collaborative and relentlessly positive, this is a great introduction to improv for beginners and a chance to build on existing skills for those with experience. Students enrolled in this class will have the opportunity to perform at one or more All Ages Night at ColdTowne Theater.

This class fosters creative collaboration, taking risks, and creating hilarious characters and situations on the spot. The early weeks of the class will focus on building improv skills. Mid-semester, students will begin to shape the characters and ideas into sketches.

To save $20 on your class registration, email Kristin Henn at [email protected] and let her know which class you’d like to register for, as well as your child’s name and date of birth.

You can also catch a free performance of What’s the Story Steve? every Saturday at 10am, followed by an optional $10 drop-in class, from 11–11:50am. Beginning October 13, 2013, Move Your Tale will also offer an All Ages Improv Show every Sunday at 5pm. Both shows are Pay What You Wish and take place at ColdTowne Theater, 4803 Airport Blvd, next to I Luv Video.

This post was sponsored by our friends at Move Your Tale.  For more information on classes or shows, visit the Move Your Tale website.