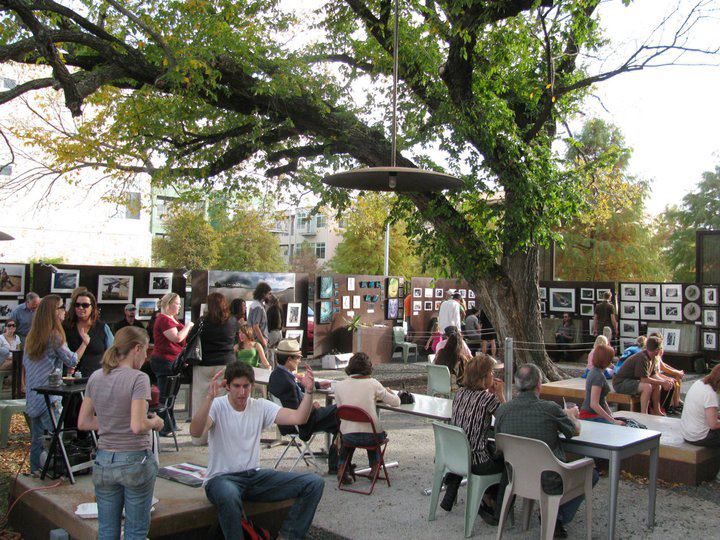 Your grandmother probably told you the secret ingredient in all her recipes is love. At Hot Mama’s Cafe, love is the not-so-secret ingredient. When you eat at Hot Mama’s, co-owner “Mama” Kelly Abshire will make sure you walk away with a happy tummy and a happy heart.

“Our motto is ‘Love with a side of coffee,’” Mama Kelly told Austin.com. “And when I first walked up (to the restaurant) and saw ‘serving with love’ on the door, I just knew instantly this was going to be home for me. We’re an all-inclusive, loving environment. We write ‘love’ on the inside of our sandwiches with your mayo or mustard. You don’t necessarily know it, but we really believe in the intention that we put into the food.”

Hot Mama’s Cafe is located in East Austin, near the corner of 6th and Pedernales. It’s on the ground level of a mixed use development, catty-corner from John Mueller Meat Company.

Kelly has been with the business since the early days. The original “Hot Mama,” Holly Lawson, opened the business in 2006. She had three boys and a love for coffee. “She wanted to create a space where mamas could come and hang out. She realized early on that you can be a mother and a wife, or you can own a business,” Kelly said. So in 2007, Kelly came into the picture. She owned Ararat Restaurant, but it was losing the lease on its physical location. Holly and Kelly met at a benefit that Kelly threw for Ararat, at Cafe Mundi. Holly wasn’t getting much foot traffic at Hot Mama’s, so she went to see what was happening at Cafe Mundi where 200 people had shown up for a black tie and flip-flops affair.

After Kelly explained her situation with the Ararat lease, Holly wanted to know what Kelly needed. The answer was simple: a kitchen. The two worked out a mutually beneficial arrangement. “I created a menu for her in trade to allow me to use the commercial kitchen so that I could do my prepackaged hummus and wraps and my catering. We threw several Ararat parties here to bring the community to Hot Mama’s,” Kelly said.

In 2010, Kelly bought the business from Holly when Holly decided to move to Alaska. It hasn’t been easy. “We’ve struggled,” she said. “This side of 6th Street didn’t develop as quickly as a lot of people thought. I think that was part of the hardship for Hot Mama Holly. She was the first business in this complex. She thought this place was going to boom instantly, but here we are eight years later and we’re just now getting our development across the street.”

Kelly happily took on business partner Tonja Drymon to help with the physical remodel and to help carry out Kelly’s vision for the future of Hot Mama’s. Kelly is glad to have someone as a sounding board. Hot Mama’s will close over school’s winter break to reopen in early to mid-January with more seating on the inside and a redesigned courtyard.

They will still be serving Kelly’s amazing food, but the restaurant will have more grab-and-go options, along with beer and wine. They will also be open on the weekends again. “There’ll be more space on the inside to sit,” Kelly said. “It’s still going to look like my living room on the inside. I’m not getting tables and chairs. There’s going to be more seating areas in the ‘living room.’ That’s so important to me. Out on the courtyard, you can have more workspace and more quiet time. But you can also pick up a hula hoop and hoop it out!”

Wait. Hula hoops? Yes, hula hoops. They have a hoop jam between 10 a.m. and noon on Wednesdays. And when they bring back weekend hours, they’ll have a Sunday afternoon event they playfully call “hoop church,” hosted by an awesomely talentedu hula hooper. “We put the music on outside, and we just get our hoop on,” she explained. “It’s a great form of exercising without feeling like you’re exercising. I love to look out these doors and see everyone hula hooping in the courtyard.”

And that’s just for starters. Wait until they bring in the belly dancers and fire dancers! At the heart of the love Kelly wants to share with you is her great food. Hot Mama’s has several dishes that keep bringing people back. First is the Mediterranean Mama, a toasted panini with turkey, tomatoes, feta, and olive tapenade, topped with dill mayo and fresh cucumbers. Then there is the Persian Prince, also a toasted panini, but with Ararat lamb, rosemary tahini sauce, havarti cheese, and fresh tomatoes.

“All our paninis are topped with their fresh vegetables and their sauces,” Kelly said. “They’re not on the inside, so you eat them almost like brioche. They’re so pretty when they come out.”

If you want a salad, the most popular one is the Roasted Beet and Chickpea Salad. All of Hot Mama’s salads come with Ararat pomegranate soy dressing.

No matter what you order, Kelly truly appreciates her customers. “Coffee and food is a luxury,” she said. “We know that people don’t have to eat out. We think we need coffee, but it’s still a luxury item. It’s such an honor that people will come the distance, especially right now because we don’t have a lot of built-in clientele. We’re a destination spot for people. They really do make an effort to cross the railroad tracks and come to Hot Mama’s.”

In the end, Kelly wants her customers to feel loved. “We’re in a growing city that’s changing every day,” she concluded. “We still want to be that local hub that’s keeping Austin weird, but is also keeping Austin loved.”
—